On 1 July 2009 the Center for the Study of Democracy organized a working meeting dedicated to the best research and monitoring practices of organized crime in the EU.

Mr. Nikolay Tagarov, Senior Analyst at the Center for the Study of Democracy presented a current CSD study analyzing the links between corruption and organized crime in EU-27. Mr. Tagarov overviewed CSD’s past experience in studying organized crime. For example SELDI – the South-eastern European Legal Development Initiative, which gathered leading not-for-profit organizations, representatives of government institutions and experts from the countries of Southeast Europe in order to build a public-private coalition for countering corruption in those countries.

Dr. Emil Tzenkov, Senior Fellow at the Center for the Study of Democracy presented a project on the topic of Antiques Trade. He emphasized the sensitivity of this topic in terms of politics. The market of antiques is strictly structured and comprises internal markets and international illegal trade channels. At the moment in Bulgaria the number of antiques from Roman, Greek and Thracian times is the highest in Europe. This makes the problem of high significance for the country. However, due to personal interests or indifference on the topic, this matter is not discussed by the politicians and there are no clear laws which try to curb the smuggling of antiques.

The moderator of the event, Mr. Ruslan Stefanov, Coordinator of the Economic Program of the Center for the Study of Democracy summarized the main conclusions form the discussion and stressed on the importance of the international cooperation between the NGOs and the state institutions in the fight against crime. 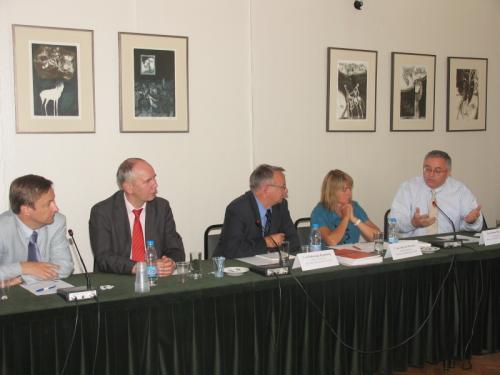 Mr. Nikolay Tagarov, Senior Analyst at the Center for the Study of Democracy