The current situation in Syria and Iraq and the emergence of the so-called Islamic State (IS) have created new security threats globally and in Europe. Since its rise as a new actor on the Islamist extremist scene, IS has become infamous for its exceptionally cruel tactics in territories it controls but also for organising and/or inspiring numerous terrorist acts far from its official borders, including in Europe and the US. Recently, the international military campaign against IS has been intensifying and the latter has suffered territorial loses.

The latest developments in the conflict along with possible scenarios for an IS defeat, as well as its aftermath and implications for Europe, were the subject of a round table discussion held at the Center for the Study of Democracy on 18 November 2016, with the participation of Brian Jenkins, Senior Adviser to the President of the RAND Corporation.

Mr. Jenkins discussed recent developments with regard to IS in the Middle East, specifically focusing on the current military campaign in the the Iraqi city of Mosul and the Syrian city of Aleppo. Mr. Jenkins presented a detailed analysis of the differences and parallels between the two key cities, the Iraqi and Syrian insurgencies and military tactics of the US-led coalition. He explained that even if driven away from its strongholds, the Islamic State is not likely to disappear – instead it is expected to go underground and engage in guerilla warfare for which it is well prepared.
However, Mr. Jenkins noted that this is not an option for foreign fighters, who are easily identifiable and are expected to either move to fight in another Jihadist front or return home. The latter possibility presents specific challenges for Europe, as around 5,000 to 6,000 Europeans mainly from France, Belgium, the United Kingdom and Germany have joined the Islamic State. While a portion of these might come back disillusioned, others are likely to stay motivated to continue the fight. Therefore, a rise in terrorist attacks in Europe can be reasonably expected. Mr. Jenkins highlighted persisting gaps in sharing of information between intelligence services and differences in legislation across EU member states as major challenges that impede the fight against terrorism.

Rositsa Dzhekova, Coordinator of the Security program at the Center for the Study of Democracy commented on the variety of approaches to prevent and counter violent extremism across the EU, including with respect to deradicalisation or prosecution of returning foreign fighters. She noted the lack of consensus regarding the effectiveness of relying on risk indicators to recognise and address radicalisation into violence early on, despite the widespread use of such approaches Europe-wide.

Mr. Jenkins reiterated that it is very difficult to predict when someone will commit a terrorist act, even with regard to those already monitored by security services. He also compared the different paths of radicalisation of Al-Quaeda recruits and the new generation of IS followers who radicalise much quicker, do not undergo the same ideological indoctrination and are not particularly religiously observant. Hence it has become more difficult to build a typical profile of the terrorist-to-be and use risk indicators to predict violence. He noted, however, that broad preventive efforts aimed at addressing social exclusion and polarisation and building trust through community policing are essential for their own sake. Monitoring thousands of suspected terrorists remains a significant challenge for intelligence services, as it requires substantial resources in terms of staff and funding. 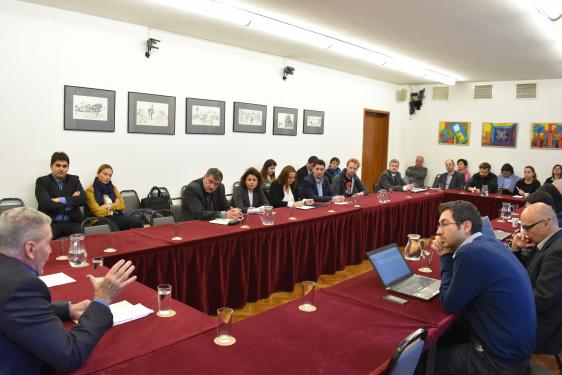 During the Round table "What Comes After the Islamic State: Implications for Europe", Sofia, 18 November 2016

Brian Jenkins, Senior Adviser to the President of the RAND Corporation and Dr. Ognian Shentov, Chairman of CSD

Rositsa Dzhekova, Coordinator of the Security Program at CSD

Brian Jenkins, Senior Adviser to the President of the RAND Corporation.
Related