Russia's invasion of Ukraine has increased tremendously the risks to Europe's energy and climate security and has added another major challenge for European energy-intensive industries, which are already facing the challenge of decarbonisation. In order to avoid a trade-off between energy security and energy transition, Member States need to put in place a regulatory framework, which empowers energy-intensive companies to decarbonise their production processes and facilitates the much-needed expansion of R&I. It is crucial to push for cutting-edge technological innovations in the industrial sector that lead to higher energy efficiency gains, the replacement of fossil fuels by renewable energy-based electrification, the uptake of synthetic fuels and hydrogen in manufacturing processes, as well as the optimization of the material use towards circular-based production processes.

The decarbonisation of the industrial sector was the focus of the policy roundtable Transition of the Energy-Intensive Industries’ Ecosystem to Climate Neutrality in Eastern Europe, jointly organised by the Center for the Study of Democracy (CSD) and the Enterprise Europe Network Bulgaria on 15 July. During the event, Dr. Evgeni Evgeniev, Policy Officer at the E1 Unit of the European Commission's DG Research and Innovation's Directorate presented the main findings and conclusions of the European Research Area (ERA) Roadmap, identifying key and innovative low-carbon technologies for energy-intensive industries, as well as tools to attract R&I investments to accelerate their deployment and uptake in energy-intensive industries. He emphasised that although Europe is performing well in terms of R&I per GDP, European companies need to catch up substantially in terms of their R&I/sales ratio, especially compared to Asian companies from countries such as China, Japan and South Korea.

During the discussion, the speakers agreed that the decarbonisation of the industrial sector is much more complex than the low-carbon transition in the energy sector and that there is no one-size-fits-all approach and solution for all industries. Although electrification is the long-term objective, high-temperature processes would still require gas, hydrogen or synthetic fuels in the short- and medium-term until new technological solutions occur.  The speakers agreed that R&I, which has been driven mostly by private companies so far, needs a strong push by the government, so that the Bulgarian industrial sector would be able to withstand the current crises, while simultaneously getting on a pathway towards climate neutrality. The Bulgarian government should therefore allocate a higher share of the EU and national budget to green tech R&D, including the development of technology roadmap and a dedicated market uptake strategy. The Bulgarian government should also put more efforts into alleviating some deeply-rooted structural and skill mismatch roadblocks on the labor market in order to prepare the Bulgarian workforce for a green future. 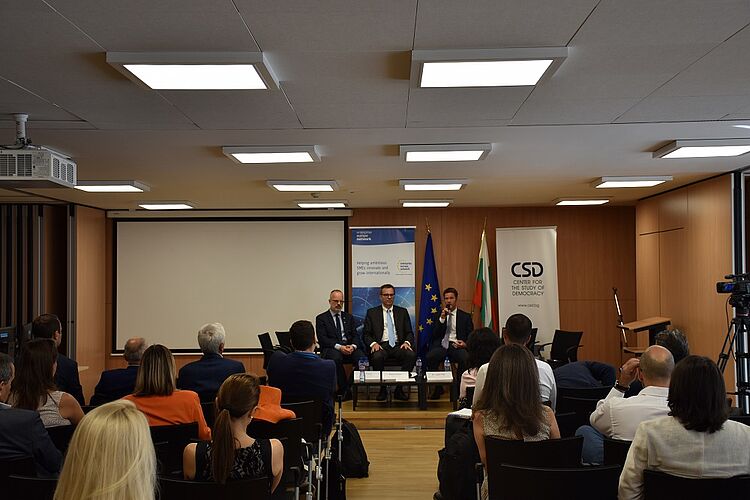 The speakers of the public discussion "Transition of the Energy-Intensive Industries’ Ecosystem to Climate Neutrality in Eastern Europe", 15 July 2022, Sofia