Training: The links between corruption and organized crime: tools and methods

Training: The links between corruption and organized crime: tools and methods

On 17 February 2015 the Macedonian Center for International Cooperation (MCIC), in collaboration with the Center for the Study of Democracy (CSD), organized in Skopje a training on the tools and methods for monitoring and analyzing the links between corruption and organized crime. The participants included a selected group of public institutions’ administration responsible for anti-corruption and organized crime legislation and measures.

The speakers underlined that corruption is intimately related to organized crime and tackling the two issues together is important for the long-term sustainability of anti-corruption efforts. CSD’s experts introduced Bulgaria’s experience and monitoring mechanisms and initiated a discussion on the applicability of such mechanisms to the situation in the Republic of Macedonia. They noted that an important aspect of such knowledge transfer are the opportunities for using EU membership prospects more effectively to achieve anti-corruption efficiency.

Ms Emilija Tudzarovska-Gjorgjievska, Project Officer, Macedonian Center for International Cooperation (MCIC), made the opening address and introduced the overall objectives of the training. She presented the SELDI results and the trends in the corruption in the years 2001, 2002 and 2014. The key factors that influence the corruption spread according to the survey results are obtaining personal gain, the failure to adhere to the laws, the ineffective policy measures, and the low salaries of the state employees. She noted that 63% of the citizens have felt corruption pressure when contacting the public administration; 73% of the business and 56% of the citizens declare that they would not take bribe if they were state employees. Citizens perceive as the most corrupt the customs, the court, and police.

Mr. Todor Yalamov, Senior Analyst at the Economic Program of the Center for the Study of Democracy, Bulgaria presented the Coalition 2000 initiative, its objectives, activities and achievements. He stressed on the importance of developing culture of accountability and integrity; reducing costs for formal business; and strengthening enforcement of the policies and legislation. He underlined that corruption is not a sickness, it is a symptom for the inefficiency of the system. He underlined that the legalization of the informal businesses is important, but it should not be selective and benefitting only one monopoly. Mr. Yalamov presented the objectives of Coalition 2000:

He explained that today the Bulgarian national television is very open to criticize the policy-makers, which is not the case with the private televisions. He recommended for Macedonia to also increase the media freedom. He also underlined that public awareness is very effective, especially if targeting areas that can be tackled. In Bulgaria this was the case of the bribes taken by the traffic police. After the public campaigns on the TV the people understood their rights and started objecting to the fines in the courts. The long-term survey series produced showed that some of the policies did produce a decrease in corruption. Mr. Yalamov also recommended the use of mirror statistics for civil control over the efficiency of the customs. He warned about the possibility of emergence of quasi-NGOs after accession, based on the experience of Bulgaria. He noted the role of CSD in limiting the influence of representatives of the public institutions over the civil sector.

Mr. Ruslan Stefanov, Director of the Economic Program of the Center for the Study of Democracy stressed that in many cases in Western Europe, the authorities do not disclose the number of people prosecuted for corruption in the customs and in the police. The lack of information is the key problem when analyzing the issue – there are many reports on low-level, petty corruption, but little is discussed about the high level corruption. Mr. Stefanov discussed the different anti-corruption approaches applied in Europe. The German-Nordic approach does not regard the size of the corruption offense and imposes strict punishments in all cases. In contrast, the SEE approach, also applied in Greece, Italy, Spain, France, and Portugal, has as main characteristic the selectiveness of the punishments – small bribes are ignored, and not every case is pursued due to the high poverty in these countries. Mr. Stefanov also presented the CSD Corruption Monitoring System. He underlined that it is important for the SEE countries to use similar systems, in addition to the existing mechanisms of financial controls and inspections. He stressed that it is becoming exceedingly difficult to tackle corruption, especially by the small underfunded teams at the institutions, and there is need of engaging the wider society in support to the public institutions. The last 20 years in Bulgaria the public administration is greatly underfunded compared to the other countries, but in 2004 the administration realized they have more funding that they could spend, which lead to the challenge to decide what measures and activities should be funded with the EU funds. He noted that in 2009 and 2010 Bulgaria was successful in fighting corruption in a worsened economic situation - the public procurement declined in half, and access to bank financing dried out; and the EU funding for Bulgaria were frozen. The new government started to actively implement control and policing over all aspects of the public administration and the business, thus scrutinizing all aspects of corruption. This policy however achieve only short-term results. The levels of corruption are dynamic and change over the years, so the consistent enforcement of the policies are more important than the temporary successes of the countries achieved through different methods. He concluded that when there is systemic corruption countries need combination of economic and financial tools. The root of the problem lies on the historic dependency of the public servants on the incomes obtained regularly by bribes and other forms of corruptions. Mr. Stefanov recommended the discontinuation of the practice of massive controls over the small and micro enterprises, and called for the use of risk assessment methods and targeting the inspections towards the cases which will result in greatest return of misused public funds. He also noted that Bulgaria has a good legislation on asset declarations, but it is not used by the institutions for proactive enforcement and investigations. Mr. Stefanov concluded with three main policy recommendations: 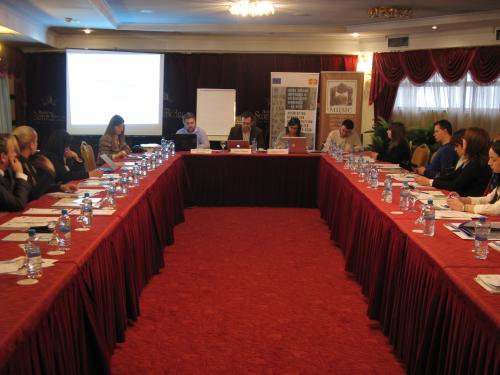 Mr. Todor Yalamov, Senior Analyst at the Economic Program of the Center for the Study of Democracy and Ms Emilija Tudzarovska-Gjorgjievska, Project Officer, Macedonian Center for International Cooperation

Mr. Ruslan Stefanov, Director of the Economic Program of the Center for the Study of Democracy
Related