Training: Models for Supporting Roma Child Victims of Trafficking with the Aid of Community-based Services

Training: Models for Supporting Roma Child Victims of Trafficking with the Aid of Community-based Services

On March 30, 2015, the Center for the Study of Democracy hosted a training session entitled Models for Supporting Roma Child Victims of Trafficking with the Aid of Community-based Services. The goal of the session was to discuss the gaps in the currently existing victim support system and to identify opportunities for the implementation of community-based services which would strenghten assistance and reinegration of trafficked children from marginalized Roma communities.

Ms. Kamelia Dimitrova, Senior Analyst at CSD, presented the main profile of children trafficked for sexual exploitation and for pickpocketing. The profile is compiled as a result of a research project, carried out with the help of social service providers, including those who work with trafficked persons. According to official data around 12-15% of the victims of trafficking in Bulgaria are children. When the purpose is for them to work in the sex industry, they are usually sent to the Netherlands, Germany, Poland and France. When children are trafficked for panhandling and pickpocketing, England, Austria and Greece are the most frequent destinations. In most cases, victims are girls. The children trafficked for pickpocketing are usually young, between 8-14 years of age. They are often exploited by their own families, which makes investigation cumbersome since the children do not feel like victims and many leave the crisis centers of their own accord. The victims of trafficking for sexual exploitation are somewhat older, between 16-18 years of age. While in this form of trafficking the victims are also primarily girls, around 20% of the cases involve boys. These cases, however, do not reach the victim support mechanisms. An especially vulnerable group in this respect are young transsexual males.

Ms. Yva Alexandrova, Senior Analyst at CSD, presented the main vulnerability indicators. A substantial percentage of the child victims are of Roma background. Even though in Bulgaria victim data is not segregated by ethnicity, according to expert assessments the proportion of Roma victims is between 50-80% for trafficking for sexual exploitation and reaches up to 90% for trafficking for pickpocketing. Despite these figures, Ms. Alexandrova noted that there are no indicators which can be exclusively attributed to the Roma community. There are some factors, however, which are especially relevant for that particular community, like discrimination and segregation in schools. Poverty, unemployment, low incomes for the working population and insufficient education are important factors. Intellectual disabilities, mental disorders, domestic violence, substance abuse and prior experience in prostitution are commonly observed among trafficked children. The existence of large debts and the practice of early arranged marriages also create favorable conditions for trafficking, notably in the Roma community. The lack of preventive care for severely marginalized families is a particularly serious problem.

Ms. Maria Cheshmedjieva, from the Fund for Crime Prevention Iga and a member of the local Commission for the Prevention of Trafficking in the city of Pazardjik, elaborated on different profiles of children, who have been victims of trafficking. Children living in a family environment and going to school are less often victimized, but there are such cases too and mental disorders, naivity and lack of information are vulnerability enhancing factors. Children from institutions are especially vulnerable as well as child victims of violence and those having trouble with the law. Other groups with different levels of risk are working children, children who work and study and the ones in charge of a household. Ms. Cheshmedjieva underscored the fact the channels for trafficking in persons coincide with the channels for drugs and arms smuggling. Among the most important indicators suggesting that trafficking is taking place is a wary child or several children accompanied by a someone, who is not a relative, signs of violence etc. Trafficking is carried out through the following mechanisms: newspaper adds for jobs, promises for work and a better life, forcing, the illusion of a loving relationship, internet marriage, sale by the family as well as the phenomenon of the second wave, when a victim later on goes on to recruit others.

Ms. Mariela Todorova-Koleva, Director of Crisis Center Balvan, presented the relevant procedures in handling cases. The stages of the process involve planning, realization, review, closing and assessment of the results. The services that the Crisis Center offers are focused on the comprehensive satisfaction of all of the children's needs – physical, health, educational, psychological and social. The main goals is the emotional stabilization of the children, the fostering of sense of trust and stability and the acquisition of useful skills, necessary for independent life. The crisis center also assists the continuation of contact with relatives and other institutions. The main problem in the carrying out of these activites is the insufficient funding.

Ms. Dimitrova presented the problem zones in the victim assistance and protection mechanism. At the level of handling signals, the identification of potential and actual victims is difficult. During the reception of identified victims stage, there are gaps in documentation which makes the accurate assessment of cases challenging. The temporary care phase is plagued by insufficient communication between the Crisis Centers and the Departments for Child Protection (DCPs). Partly, the problem stems from the fact that for DCPs acquiring access in margnalized communities is difficult due to, on the one hand, community distrust for state institutions, and the lack of knowledge about the community on the part of social workers, on the other. The last stage, long-term reintegration is the least developed link of the mechanism. Monitoring carried out by DCPs is in most cases superficial, and in marginalized families it is not performed at all. The long-tem care measures undertaken by the DCPs are usually either reintegration in the family or sending victims in an institution, in practice reexposing them to risk of trafficking. Ms. Dimitrova suggested a mechanism for including community-based services in the Coordination Mechanism for Reference and Handling of Cases of Unescorted Children and Child Victims of Trafficking, Coming Back from Aborad. Before the phase of victim reception, community-based services can actively participate in monitoring of the family environment in order to make a comprehensive assessment of the risk, come up with a plan for action and choose the most appropriate measure for protection. During the long-term reintegration of victims in their families or in a family-type arrangements, they can also be active in the supervision of the reintegration process by carrying out frequent on-site visits. Community-based services could also brief DCPs on the state of the reintegration process and consult the child and his/her family on health and social topics in order to support effective social adaptation.

Ms. Todorova-Koleva expressed the opinion that communication between institutions has to be improved and the information about victims has to be shared in its completeness. Another serious problem is the fact that personnel from institutions dealing with victims are often not sufficiently qualified and look at the child victims with suspicion.

Mr. Gancho Iliev, Chairman of the World without Borders Association, supported the creation of community-based centers. According to him, it would be best if these centers offer a comprehensive service but he noted that the groups at risk should not become dependent consumers of services, and therefore, there is a need to develop the human capital within the community itself.

Ms. Spaska Mihailova from the New Way Association, also agreed that community centers can have a crucial role in service provision in both prevention of trafficking and long-term support for victims. Nevetheless, she noted that this necessitates the development of a new methodology and financial standard.

Ms. Lidia Zagorova, director of End Child Prostitution, Child Pornography and Trafficking of Children for Sexual Purposes (ECPAT) Bulgaria and mrs. Maria Nikolova, director of the Family Consulting Center for Parents and Children in the town of Novi Pazar, elaborated on the problem of financing organizations providing social services, including those that deal with victims of trafficking. They highlighted the existing paradox in Bulgaria where on one hand, social services are in constant threat of funds ceasing since they are mainly financed on the basis of projects and donations, but on the other hand, if they are to become delegated and funded by the state, the quality of services would seriously diminish.

The recommendations formulated during the training session were finalized in a Model for Supporting Roma Child Victims of Trafficking with the Aid of Community-based Services, which was presented to all national and local stakeholders during the seminar carried out on the next day.


The training was carried out under the project "Combating new forms of trafficking of Roma children with the participation of the community" (CONFRONT) funded by the Prevention of and Fight against Crime Programme of the European Commission. 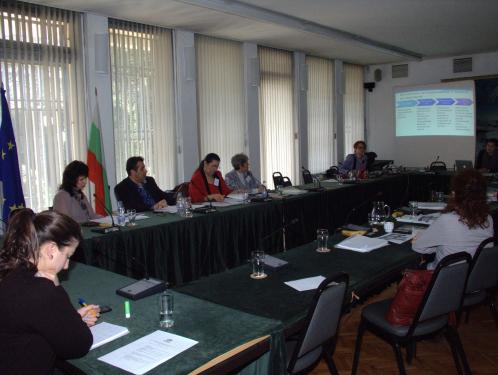