Recently released data from a national representative survey on attitudes towards LGBT people in Bulgarian society reveal a worrying trend - the attitude towards LGBT people in Bulgaria in recent years has been regressing. The share of people rejecting the right of LGBT to live their lives as they wish has increased from 18% to 25% between 2012 and 2018. By comparison, in 2008 this percentage was 30%, according to European Social Survey data. The social distance between the general population and LGBT communities has also increased. A big number of people feel relatively to strongly uncomfortable to have LGBT neighbors: 63% if they are bisexual; 65% if they are lesbians; 66% if they are gay men; and 68% if they are trans people. By comparison, according to the European Values Survey data, the rejectors in 1999 were 54% and 51% in 2008.

In this unfavorable context, on 9 May 2019, the Center for the Study of Democracy took part in a discussion on "The Right to Free Movement of Same-Sex Families in the EU".

The main focus of the event was presenting data from the report "Free movement of EU citizens - rights and challenges for same-sex families in the Republic of Bulgaria", which review of the rights guaranteed to EU citizens and an analysis of the measures and deficiencies in the implementation of the Directive in Bulgaria, a review of administrative and judicial practice in the country and data from a national survey of same-sex couples with recognized status in other EU Member States who reside temporarily or live in Bulgaria. Another highlight at the event was the presentation of a petition urging the leaders of the European institutions to take measures to protect same-sex families in the EU. The petition is addressed to the Presidents of the European Parliament, the European Commission and the Council of the EU and is backed by 17 758 signatures of citizens from across the European Union. 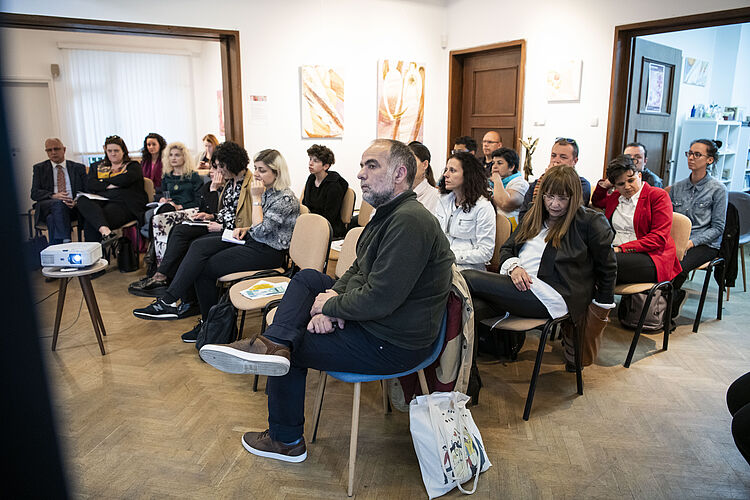 The participants during the event 'The Right to Free Movement of Same-Sex Families in the EU', 9 May 2019, Sofia

The participants during the event 'The Right to Free Movement of Same-Sex Families in the EU', 9 May 2019, Sofia
Related