Russia has used a number of instruments to amplify its economic footprint in Central and Eastern Europe, aiming to increase its political influence, to capture public policy making, and ultimately to discredit the West's democratic model, and undermine trans-Atlantic ties. These instruments have been outlined in The Kremlin Playbook: Understanding Russian Influence in Eastern and Central Europe, a report prepared by the Center for the Study of Democracy in partnership with the Center for Strategic and International Studies (CSIS). The report was presented at a public event at CSIS in Washington D.C. on 13 October 2016.

More than 150 US policy-makers, experts and media reporters participated in the event. The study's leading authors presented the key findings from the report, which illuminate the linkages between Russia's economic presence in Central and Eastern Europe and the region's general decline in political stability, diminishing democratic standards, and erosion of governance standards in five case study countries: Bulgaria, Serbia, Slovakia, Hungary, and Latvia.

In his opening remarks, CSD Chairman Dr. Ognian Shentov emphasized that we need to look first at the Russian economic footprint in Europe, and metrify this footprint, which is still largely unknown or ignored; otherwise most probably we'd be cataloging only anecdotal evidence. On the other side, we need to run this analysis from different optics - the governance deficits, gaps and even failures in Europe - both at EU and national level - which provide ample opportunities for Russian aggressive economic and political behavior.

Heather Conley, CSIS Senior Vice President for Europe, Eurasia, and the Arctic, explained that the research had determined that Russia cultivated an opaque web of economic and political patronage across the region that the Kremlin uses to influence and direct decision-making. This web resembles a network-flow model—or “unvirtuous circle”—which the Kremlin can use to influence (if not control) critical state institutions, bodies, and economies, as well as shape national policies and decisions that serve its interests while actively discrediting the Western liberal democratic system.

According to Ruslan Stefanov, Director of the Economic Program at CSD, Russia has exploited governance deficits in the five countries, e.g. in state-owned enterprises, regulatory bodies, the court system, the tax authorities, etc. to amplify its economic presence in Central and Eastern Europe. He quoted figures from the report estimating that, on average, Russia’s economic footprint in the five case countries ranged from about 11 percent (in the cases of Hungary and Slovakia over the course of the study period) to an astonishing 22 percent in Bulgaria. The full extent of Russia’s reach, however, remains unknown as Russia has sought to conceal its economic activity behind a web of foreign shell companies and offshore accounts.

In her keynote Kathleen A. Kavalec, Deputy Assistant Secretary, Bureau of European Affairs at the U.S. Department of State commented that one of the most important achievements of the Kremlin Playbook report is to recognize the general framework used by Russia in its policies and activities towards the CEE, adding that Russia’s policy increasingly rejects the post-Cold War order in Europe. Russia, she underscored, is also willing to undermine existing rules, as witnessed in its coordinated aggressive actions in Ukraine, elsewhere in Europe and in the United States. Ms. Kavalec noted that they aim to weaken core institutions in the West and cast doubt on the integrity of the West’s democratic systems. 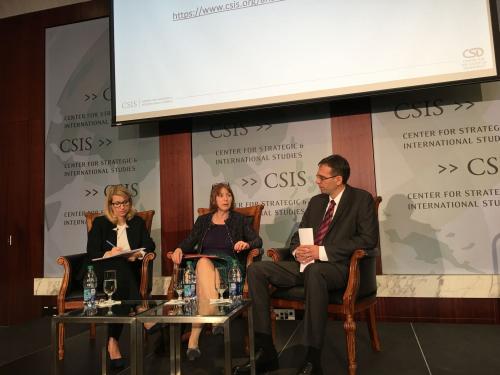 From left to right: Heather Conley, CSIS Senior Vice President for Europe, Eurasia, and the Arctic; Kathleen A. Kavalec, Deputy Assistant Secretary, Bureau of European Affairs at the U.S. Department of State and Ruslan Stefanov, Director of the Economic Program at CSD 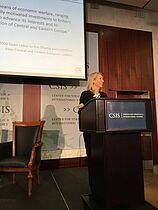 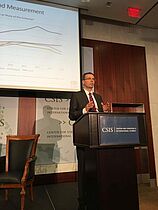 Ruslan Stefanov, Director of the Economic Program at CSD