The EU Energy Union and the Russian Gas Projects: Energy Choices and Energy Security in Europe

The EU Energy Union and the Russian Gas Projects: Energy Choices and Energy Security in Europe

Russia has been a critical but controversial energy supplier for Europe for centuries, and the way the EU and Russia energy strategies develop and interact in the decades to come is going to be important for the energy choices of European households. Gas has been a particular case in point in this regard. The recent Russian gas energy projects seem to have been largely politically motivated with the aim of undermining the EU’s efforts to deepen its internal energy market and keep gas prices in Western and Eastern Europe apart, preserving Gazprom’s dominance on as many national markets in CEE as possible. Governance deficits in many of the CEE countries have contributed to a lack of policy consistency on the main energy security priorities of the region including diversification of gas routes, liberalization and integration of markets. These were some of the main conclusions of a round table discussion on the EU Energy Union and the Russian Gas Projects: Energy Choices and Energy Security in Europe held at the Center for the Study of Democracy (CSD) on 28 June, 2017.

Ilya Zaslavskiy, Academy Associate at the Royal Institute of International Affairs (Chatham House) and Research Expert for Free Russia Foundation, presented his latest analysis on the The Kremlin’s Gas Games in Europe: Implications for Policy Makers, where he discusses the energy security implications of the Russian attempts to bypass existing transit routes and embark on new pipeline projects such as the Nord Stream 2 and the Turkish Stream pipelines. If built, the two projects would undermine the fragile economic and political stability of Ukraine, as well as the EU internal unity.

Martin Vladimirov, Analyst at the CSD Economic Program, focused on the impact of the building of Nord Stream 2 on Bulgaria and the SEE region. Bulgaria, which is among the most dependent countries on Russian gas, would be disproportionately hurt by the completion of the Russian-German pipeline. Mr. Vladimirov cited the findings of a recent report by the Hungarian-based Regional Center for Energy Policy (REKK) in Budapest, which estimates that Bulgaria would face a negative economic effect from Nord Stream-2 worth around EUR 167 million. He noted that the building of pipelines circumventing the existing transit routes from Russia would necessitate the completion of new transmission infrastructure costing at least EUR 1 billion in Central and Eastern Europe, which would inevitably drive up wholesale gas prices. He juxtaposed the negative economic impact of Nord Stream-2 with the benefits of diversifying the gas supply to Bulgaria. The construction of the Interconnector Greece-Bulgaria (IGB), for example, would produce a positive economic outcome of close to EUR 1.2 billion, if existing transmission routes are shifted to the Baltic and Black Seas.

Mr. Vladimirov focused on several steps that may be taken to improve the Bulgarian gas supply security including:

These three solutions would provide Bulgarian consumers with more options to choose from, and could lead to the lowering of the carbon footprint of Bulgarian households. 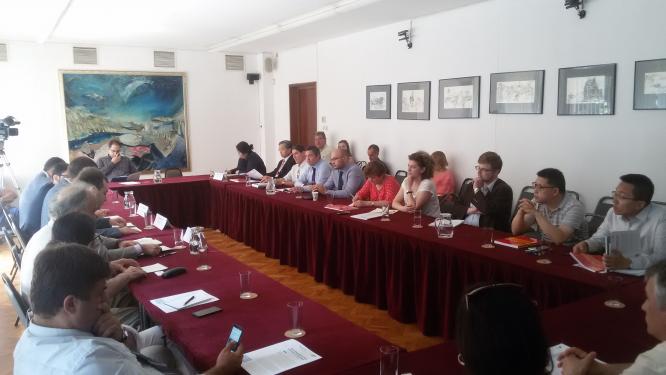 The participants in the round table 'The EU Energy Union and the Russian Gas Projects: Energy Choices and Energy Security in Europe', 28 June 2017, Sofia