The Anti-Corruption Agenda for Southeast Europe after the 2016 Enlargement Package: How to Break the State Capture Deadlock and Make Enlargement Deliver Again?

The Anti-Corruption Agenda for Southeast Europe after the 2016 Enlargement Package: How to Break the State Capture Deadlock and Make Enlargement Deliver Again?

In its 2015 and 2016 Enlargement Packages, the European Commission has announced that there will not be further enlargement by the end of the current Commission’s term - October 2019. While, the EU and key member-states have expressed their continuing commitment to the enlargement process in the Western Balkans, citizens and stakeholders have seen the enlargement “freeze” as a drag on motivation and drive for further reforms. The Great Recession, the annexation of Crimea and the geopolitical rift between the EU and Russia, the migration crisis, and the attempted military coup in Turkey, and the Brexit vote have all pushed back the prospect of Enlargement. This chain of negative events has exacerbated an already complicated task for local civil society and reformers in cooperation with the EC to enhance anticorruption efforts, confront state capture, and open prosperity prospects for the region.

The round table, hosted by Ms Monica Macovei and the SELDI initiative on 30 November 2016 in the European Parliament, charted the needed next steps in finding effective tools to tackle these challenges. In her opening remarks, Monica Macovei, Member of the European Parliament, European Conservatives and Reformists Group underlined that pubic support is the key of success, especially in terms of holding politicians accountable in times of elections. According to her, the citizens should share the responsibility, report cases of corruption, and not overly rely on the institutions to solve all problems. Legislation should be effectively enforced and the policies should apply corruption risk assessment, thus focusing on the most critical areas. Ms Macovei highlighted the positive impacts of the Cooperation and Verification Mechanism (CVM), but at the same time she noted that in recent years there is a concerning trend of young judges and prosecutors seeking fast enrichment, resulting in increased amounts of the bribes. She concluded by pointing out that the countries need the right people in the right places, who can apply consistent and efficient reforms.

All countries in the region have systemic problem with corruption, and even high levels of prosecution and investigation cannot tackle it in the next 5-10 years, according to Ruslan Stefanov, SELDI Coordinator, Center for the Study of Democracy, Bulgaria. Mr. Stefanov presented the key findings from the Shadow Power, the SELDI Regional Anticorruption Report 2016. Anticorruption progress has slowed down in the past two years, with citizens feeling trapped in what they increasingly see as their captured states by powerful political – economic networks. On average a quarter of the citizens in the region have been forced to engage in corruption, exposing a systemic governance problem in SEE. This has slowed growth, sustained poverty and fueled inequality. Between a third and four-fifths of the citizens in the region have chosen to stay in the hidden economy damaging long-term growth prospects. People in the region have continued to embrace migration as their only hope for better life, abandoning the local political systems as incapable of delivering this for them. Enlargement remains largely SEE’s only hope for sustained future prosperity. But slow anticorruption progress has translated into disillusionment both inside the countries and outside – in EU member states. The continued problems with governance all across new member states and in particular in Bulgaria and Romania has further fueled negative sentiments towards further enlargement. The result has been the freeze in enlargement in the current EC term and demands for stricter rules of engagement and quicker deliver mechanisms. Another response from the EU has been the strengthening of the focus on justice and home affairs issues after 2012. But the events in the FYR of Macedonia and Bosnia and Herzegovina of the past two years have demonstrated there is a need for more changes and a new approach for stronger political engagement. As noted in the 2016 Enlargement Package, the policies should focus on the link between the rule of law and economic development. Without progress on the economic side, there cannot be progress in anti-corruption and vice versa.

SELDI members from six countries shared the challenges that they face. All of them stressed on the key role of the CSOs in keeping political elite accountable. Dragan Koprivica, Director of the Center for Democratic Transition, Montenegro noted that despite the substantial administrative reforms aiming to stop misuse of public funds, people still do not feel trust in the institutions. The Agency of Prevention of Corruption, established in January 2016, is yet to show results. Sofija Mandić, Legal Researcher, Belgrade Centre for Security Policy said that they are trying to be “critical friends” with the government. According to her, politicians often use as an excuse for the lack of action on certain issue, the statement that the EU has not specifically requested it. She appealed for all documents related to EU accession to be open to the CSOs and the public, since in Serbia these documents are often kept secret. Zef Preci, Executive Director of the Albanian Center for Economic Research (ACER) underlined that in Albania administration is performing poorly, there are missing consensus between political parties, justice systems and institution establishment are inconsistent. Even the society has become apathetic and key human values are missing. Due to the fragmentation and dependence on foreign funds, the CSOs are losing reputation. Some CSOs are even used by the political elite for counteracting critics. In this context, the focus of the policies should be placed on gaining back the trust of the citizens, countering state capture, and corruption in the area of public procurement. Sašo Klekovski, Senior Adviser, Macedonian Center for International Cooperation highlighted the concerning trend of increased acceptability of corruption among young people. He also stressed the need of pressure from the bottom and focusing on asset recovery. Leila Bičakčić, Director of the Center for Investigative Reporting, Bosnia and Herzegovina described the system of clientelism and nepotism existing in BiH for more than 20 years. She confirmed the conclusion that economic reforms and a strengthening of the rule of law produce mutually reinforcing benefits, and called for reforms in the in the areas of fundamental rights, democratic institutions and public administration. Ms Bičakčić also noted that BiH is yet to see convictions for corruption, and the messages of the civil society are not heard. Evren Aydogan, Project Manager, Economic Policy Research Foundation of Turkey (TEPAV) elaborated on the cultural implications from the corruption phenomenon. He underlined that Europe and Turkey should be focusing on the current crisis of liberal democracy, and no progress can be achieved by only talking about technical measures. He concluded by appealing to the audience not to be writing Turkey out of Europe.

Sabine Zwaenepoel, Coordinator of the Centre of Expertise on Rule of Law and Fundamental Rights, DG NEAR, European Commission closed the event by summarizing the conclusions from the 2016 Enlargement Package. She expressed her disappointment at the limited results achieved by the countries after the huge amount of funding provided by EC. According to her, countries should be able to investigate and prosecute corruption. Most countries have good legislation in political party financing, whistleblowing, conflicts of interest, special prosecution offices, but results are low. For that reason the EC is working to develop a more strategic approach to countering state capture and money laundering, supporting policy and administrative reforms, ensuring appropriate control over the work of the agencies and transparent elections, improving managerial accountability and public procurement systems. EC is using the VISA liberalization process and accession negotiations as tools for reforms and strengthening of institutions and legislation. She concluded by noting that the EC is looking forward to intensifying its collaboration with the civil society. 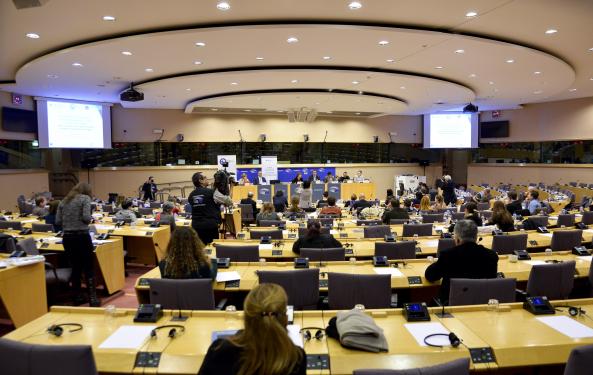 During the Round Table 'The Anti-Corruption Agenda for Southeast Europe after the 2016 Enlargement Package: How to Break the State Capture Deadlock and Make Enlargement Deliver Again?', 30 November, 2016, Brussels

Sabine Zwaenepoel, Coordinator of the Centre of Expertise on Rule of Law and Fundamental Rights, DG NEAR, European Commission

During the Round Table 'The Anti-Corruption Agenda for Southeast Europe after the 2016 Enlargement Package: How to Break the State Capture Deadlock and Make Enlargement Deliver Again?', 30 November, 2016, Brussels

Leila Bičakčić, Director of the Center for Investigative Reporting, Bosnia and Herzegovina

Dragan Koprivica, Director of the Center for Democratic Transition, Montenegro

The Participants in the Round Table 'The Anti-Corruption Agenda for Southeast Europe after the 2016 Enlargement Package: How to Break the State Capture Deadlock and Make Enlargement Deliver Again?', 30 November, 2016, Brussels

Sabine Zwaenepoel, Coordinator of the Centre of Expertise on Rule of Law and Fundamental Rights, DG NEAR, European Commission and Monica Macovei, Member of the European Parliament, European Conservatives and Reformists Group

The Speakers in the Round Table 'The Anti-Corruption Agenda for Southeast Europe after the 2016 Enlargement Package: How to Break the State Capture Deadlock and Make Enlargement Deliver Again?', 30 November, 2016, Brussels