On 28 January 2009 the Center for the Study of Democracy organized its Tenth Annual Anticorruption Policy Forum. The Forum is a high profile public event for anti-corruption initiatives, supporting the efforts of civil society and public institutions in the fight against corruption. The ninth annual Corruption Assessment Report: Crime without Punishment: Countering Corruption and Organized Crime in Bulgaria was presented and discussed at the event. The report reviews the anticorruption reforms in Bulgaria in 2007 and 2008.

In his opening remarks, Dr. Ognian Shentov, Chairman of the Center for the Study of Democracy, highlighted the structure of the Corruption Assessment Report. This year the report focuses on political corruption and its ties to organized crime. It also analyzes state capture, oligarchs’ control of state enterprises, as well as the attempts at civil society capture on the part of the state administration.

Mr. Georgi Pirinski, Chairman of the National Assembly, congratulated the Center for the Study of Democracy for its efforts in countering corruption. Mr. Pirinski emphasized three aspects in countering corruption: its nature, the results achieved by the authorities, and the necessary social environment. According to the Chairman of the National Assembly, there are two approaches of dealing with the problem. The first one is to state that all institutions are permeated by corruption, which would be a groundless and irresponsible statement, denying the possibility of resolving the problem. The sound alternative is to counter corruption by investing in the capacity of the authorities, not by baselessly denigrating them.

Dr. Shentov made a short comment that the only way of countering corruption is by means of the joint efforts of civil society, reform-minded members of the political elite and Bulgaria’s international partners.

US Ambassador to Bulgaria Ms. Nancy McEldowney called for more timely and adequate actions on the part of representatives of the judiciary, as well as for changes in society as a whole. Ms. McEldowney criticized the black statistics of contract killings in Bulgaria. She recommended that the Bulgarian authorities implement three steps in countering corruption. First, the judiciary must be called to account, and extensive delays and unjustified dismissals must end. Second, the public procurement process needs to become a showcase of clarity and transparency. Third, the eighteen political parties which recently signed the Integrity Pact for clean and transparent elections in 2009 must abide by it.

Mr. Ruslan Stefanov, Coordinator of the Economic Program at the Center for the Study of Democracy, presented the major conclusions and findings of the Corruption Assessment Report. In 2008 64.7% of Bulgarians perceived corruption as the most serious problem the country was facing, while in March 2004 their share had been only 31%. The number of corruption transactions made by the population marked an increase in 2008, reaching approximately 175, 000 per month or 2, 100, 000 transactions for the year.

As a state seriously affected by political corruption, Bulgaria suffers from a lack of political ethics and accountability. Characteristic of the pervasiveness of political corruption is the frequent use of legislation as an excuse for the lack of achievements on the part of the authorities. A striking example of political corruption are the land and forest swaps conducted over the past two years, which have become the main instrument for favoring politically connected businesses. Unfortunately, due to the global economic recession, the forecast is that corrupt practices will increase in number and intensity.

Mr. Konstantin Penchev, Chairman of the Supreme Administrative Court, highlighted the fact that for the first time the judiciary was in a position to be an active participant in anticorruption initiatives due to its enhanced administrative capacity with the establishment of the Inspectorate and the Supreme Judicial Council as a standing body.

Sofia Mayor Mr. Boyko Borisov commented on the corruption situation in Bulgaria. He pointed out three pressing issues in this regard: the need for political will to deal with the problem and the high ethical standards necessary for that; the urgent need for changes in the Code of Criminal Procedure and the formalization of court procedures.

Mr. Valery Parvanov, Deputy Prosecutor General, also confirmed that the Code of Criminal Procedure does not provide an appropriate legislative framework to the Prosecutor’s Office. He pointed out that over the last fifteen years no prosecutor, judge, or Member of Parliement has been sentenced on corruption or or bribery charges.

The Ambassador of the Federal Republic of Germany in Bulgaria Mr. Michael Geier commented on the moral and material aspects of corruption. He supported efforts for establishing anticorruption mechanisms and noted that corruption is not a phenomenon restricted solely to Bulgaria, but rather a global problem for all countries, including the most developed ones.

During the discussion, representatives of the judicial system and the state administration expressed their opinions on the problem. Ms. Anna Karaivanova, Head of the Inspectorate at the Supreme Judicial Council, described the legislative framework as good yet ineffective, due to the lack of criteria for personal assessment of the employees within the system, regarding their appointment and career development.

Mr. Nikolay Vasilev, Minister of the State Administration and Administrative Reform, underlined the importance of revising the changes in the Law on Public Procurement. He also stressed the problem with corrupt practices in regard to public sector properties. In conclusion, Mr. Vasilev highlighted the necessity of increasing the transparency of activities under the Operational Programme “Administrative Capacity”.

Mr. Dimitar Bachvarov, Member of the Supervisory Board of the Privatization Agency, focused in his comments on the absence at the event of key political figures responsible for the effectiveness of anticorruption policy. He also elaborated on Bulgaria’s status as an offshore zone. In this regard, he recommended the introduction of requirements for financial institutions’ greater accountability. 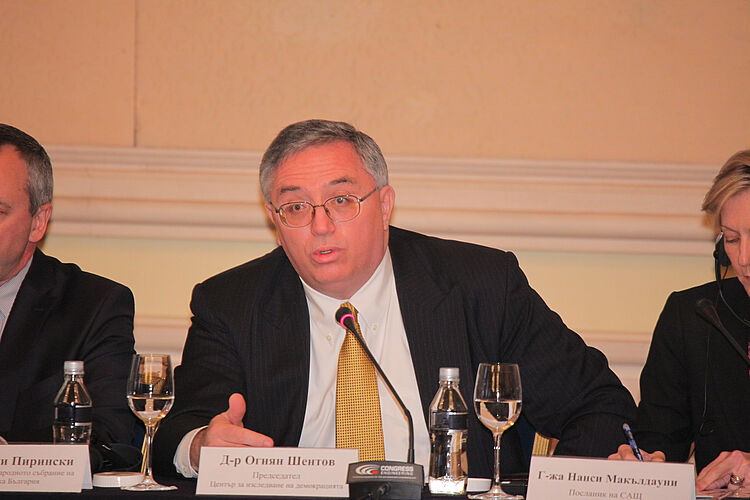 The participants in the forum

The Mayor of Sofia Mr. Boyko Borisov commented on the corruption processes in Bulgaria.

The Ambassador of the Federal Republic of Germany in Bulgaria Mr. Michael Geier

From left to right: The Mayor of Sofia Mr. Boyko Borisov; the Ambassador of the Federal Republic of Germany in Bulgaria Mr. Michael Geier; Mr. Georgi Pirinski, Chairman of the National Assembly; Dr. Ognian Shentov, Chairman of the Center for the Study of Democracy and the US ambassador in Bulgaria Ms. Nancy McEldowney

Mr. Dimitar Bachvarov, Member of the Supervisory Board at the Privatization Agency

The US ambassador in Bulgaria Ms. Nancy McEldowney called for more timely and adequate actions for countering corruption. 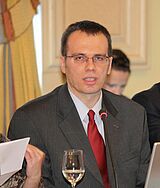 Mr. Ruslan Stefanov, Coordinator of the Economic Program at the Center for the Study of Democracy presented the major conclusions and findings of the Corruption Assessment Report

Ms. Anna Karaivanova, Head of the Inspectorate at the Supreme Judicial Council