Foreign authoritarian state actors such as Russia and China have increasingly aimed to subvert the democratic development and Euro-Atlantic integration in Southeast Europe. Their influence in the region has grown through the deployment of sharp power, particularly manifested in the phenomenon of media capture.

A roundtable held on March 30, 2021 and organized by CSD provided a deep dive into the Kremlin’s media capture tactics. The panel included the presentation of CSD’s latest report Tackling Kremlin’s Media Capture Tactics in Southeast Europe from Dr. Rumena Filipova. A comprehensive discussion, moderated by Martin Vladimirov, followed, where Ruslan Stefanov, CSD’s Program Director, Christopher Walker, Vice President for Studies and Analysis of the National Endowment for Democracy, Marius Dragomir, Director, Center for Media, Data and Society, of the Democracy Institute at the CEU, and Fredrik Löjdquist, Director of the Stockholm Centre for Eastern European Studies, provided their insights on the main challenges and possible solutions to media capture in Southeast Europe.

The discussion underscored the complexity of the Kremlin’s media capture challenge, which is advanced through political, economic and ideological connections to local oligarchic networks with strong media presence and is further reinforced by societal susceptibilities to pro-Russian messaging. Moscow’s malign media activities fit a larger pattern of the exercise of sharp power and hybrid warfare in Europe. The response to this challenge should be multifaceted, including robust action on the part of civil society complemented by support from the transatlantic community. A rethinking of existing media funding models – bifurcated into state or private financing, is critical. 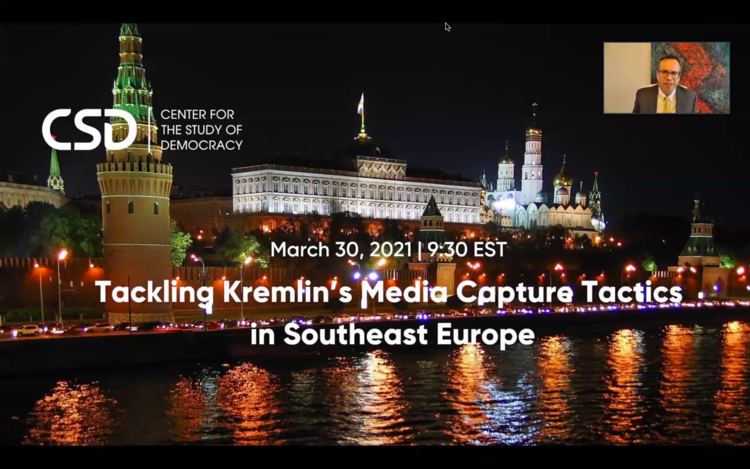