Although the EU-Turkey relations are going through difficult times, the two partners should rather focus on their common challenges and opportunities, such as the security of energy supply and the harmonization of energy legislation to enable efficient gas and power flows from East to West, supporting the establishment of the European Energy Union and the energy hub position of Turkey. These were some of the key conclusions of the participants in the international conference on Tackling Energy Security and Governance Risks in Turkey in the Framework of a European Energy Union, held on 26 April 2017, the closing event of a 15-month study of the main areas of EU-Turkey energy cooperation and the Turkish energy security profile.

Martin Vladimirov from the Center for the Study of Democracy (CSD) presented the key findings of the analytical report Towards a Stronger EU-Turkey Energy Dialogue Energy Security Perspectives & Risks. The report draws an overall picture of the state of the EU-Turkey energy dialogue, energy security risks and perspectives, and the role of the Energy Union in helping to overcome them. The study has incorporated the statements, opinions and recommendations provided by EU and Turkish policy-makers, energy experts, civil society organizations, and business representatives during a series of capacity-building workshops and study visits in Brussels and Ankara.

Commenting on the study, several speakers including Volkan Özdemir, the Chairman of the Turkish energy think tank, EPPEN Energy, said that the common denominator in the EU-Turkey relations is the diversification of supply sources. However, Turkey should not necessarily be seen as an oil and gas hub but as a transit corridor with only limited impact on EU markets.

The presentations of the following speakers focused on the different dimensions of the EU-Turkey energy dialogue. Most of them pointed out that the key impediment for the integration of the two energy markets has been the inability of the Turkish government to tackle key governance deficits related to the liberalization of the natural gas market and the unbundling of the monopoly gas importer and supplier, BOTAS. The delay in the opening up of the strategic Turkish gas sector has contributed to the stalling of more substantial regional market integration in Southeast Europe. One explanation, according to Dr. Bilge Yabancı, Visiting Fellow at the University of Graz, is that despite the fact that both sides acknowledge their mutual energy dependence, bigger political problems impede the development of a pragmatic dialogue focused on improving the efficiency of market transactions.

Dr. Nicolò Sartori, Senior Fellow, at the Energy Program in the Italian think tank, Istituto Affari Internazionali, stressed that for cooperation to work, the policy priorities should be shaped by pull and push mechanisms on both sides. The reality is that the EU and Turkey have remained aloof and not ready to facilitate even purely technical issues. Mustafa Güzel, Natural Gas Operations Unit Manager at the day-ahead power market, EPİAŞ, pointed out that on the Turkish side, governance deficits have threatened the financial stability of state-owned companies, where the Board is appointed not based on the professional capacity of its members but on political considerations. Speakers united behind the idea that Turkey has almost reached full completion of the power market but still faces a lot of implementation gaps in its legislation on natural gas, energy efficiency and renewable energy. 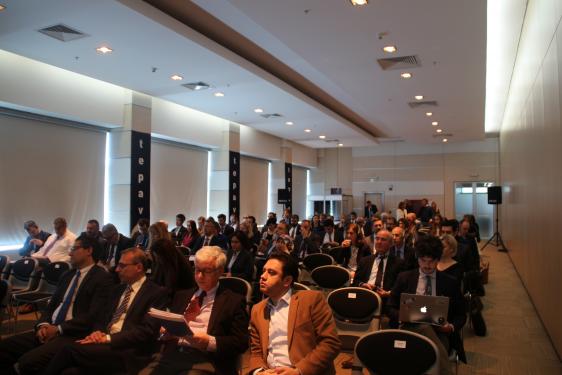 During the Conference “Tackling Energy Security and Governance Risks in Turkey in the Framework of a European Energy Union”, 26 April 2017, Ankara