The Russian invasion of Ukraine has put the European energy and climate security through its most difficult test so far. The growing geopolitical risks stemming from the excessive reliance on Russian gas have already materialized with the Kremlin unilaterally reducing the supply to most of Europe since mid-June, 2022. This is part of the Kremlin Playbook in Europe to undermine the European unity through weaponizing energy. The geopolitical crisis has shown that Europe needs to improve its energy sector governance to decouple from Kremlin’s malign economic and political influence.

These are some of the key takeaways from the policy roundtable Switching the Gears of Europe’s Energy and Climate Security Strategy: the view from Berlin, organized by the Center for the Study of Democracy (CSD) on 24 June in Berlin in partnership with the European Climate Initiative of the Federal Ministry of the Economy and Climate Action.

During the discussion, CSD presented its latest assessment on the Energy Security Risks and Russian Economic Influence in Germany: Towards Economic Decoupling based on the findings from the Energy and Climate Security Risk Index (ECSRI).

In the panel discussion, the energy and climate policy experts focused on the challenges Germany faces as one of the most vulnerable countries in terms of security of supply concerns and geopolitical exposure to Russia. The growing dependence on Russia came hand in hand with the Kremlin exploiting German strategic policy mistakes to cultivate opaque networks of patronage to influence Germany’s decision-making and undermine its the EU’s energy and climate security. Germany has continuously insisted that Nord Stream II does not have any strategic or military implications and is an entirely market-based project. The timing of the Russian invasion of Ukraine and the subsequent Russian energy blackmail revealed the fallacy of this thinking and decision-making. Hence, there is a need to remove Kremlin’s oligarchic networks by discontinuing joint strategic energy infrastructure projects with Russia and preventing illicit Russian capital from entering the German, and by extension, the European financial system.

Among the main points raised was the need to streamline the governance of the energy sector in order to ensure consistency of the energy policy with the long-term EU objectives.  Experts united behind the idea that Germany would not be able to overcome the geopolitical challenges to its energy security without an ambitious diversification strategy based on more LNG imports in the short run. However, they noted the potential risk for a natural gas lock-in if new long-term gas supply contracts are signed and new import infrastructure is built. German policy-makers need to push for more gas savings by enhancing demand response measures including the introduction of industrial sector gas savings tenders.

In addition, the unanimous opinion was that it would not make sense to restart the nuclear power plants as the security of supply risks are in industrial demand, not power generation. All speakers insisted on the need to preserve the 2030 coal phase-out timeline for Germany and warned of the potential negative signal that the relaunch of coal plants may have on global sustainability policies and, in particular, on the sustainability ambitions of Central and Eastern Europe. 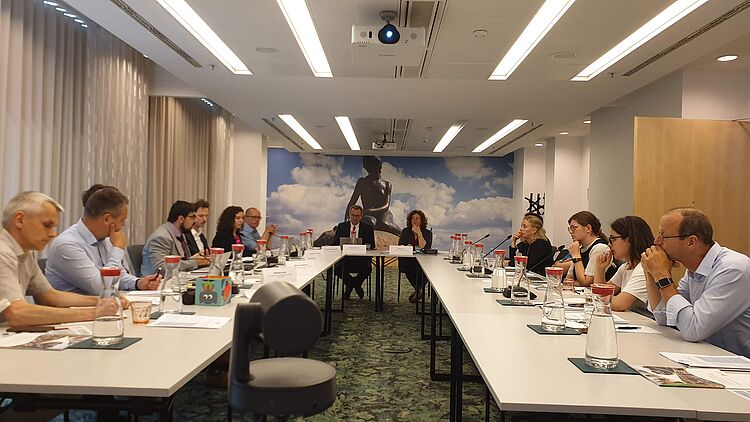 Switching the Gears of Europe’s Energy and Climate Security Strategy: The View from Berlin, June 24, 2022

The participants in the roundtable "Switching the Gears of Europe’s Energy and Climate Security Strategy: The View from Berlin", June 24, 2022