Bosnia and Herzegovina is currently the most unstable and vulnerable country in SEE with botched EU accession prospects, dysfunctional federal institutions, increasing secessionist threats, and paralyzing Russian influence. The latter is channeled entirely through the Bosnian Serb-majority entity Republika Srpska and its media and business links to the Kremlin. Most importantly, however, Bosnian-Serb leaders in the country see their political survival and development through strong ties with Moscow. Corruption and state capture remain high and governance reforms have stalled amid strong internal political divisions and confrontation. Yet, the Bosnian society is one of the wariest in SEE of corruption, which leads to very high protest potential and external migration. Corporate transparency can be improved significantly and still allows for sizable inflows of illicit finance, including very high Russian economic footprint in energy in the Bosnian-Serb parts of the country. The free distribution of Serbian channels in part of the country is a major conduit of Kremlin’s influence, as well as a reinforcing power of pro-Russian attitudes in the public, which creates favorable conditions for media capture. Strengthening Bosnia and Herzegovina’s democratic resilience further and resolving the country’s EU accession impasse, while seemingly very problematic, would be of utmost importance for the whole region and its further democratization and Euro-Atlantic integration.

On 1 September 2022 in Sarajevo the Center for the Study of Democracy (CSD) and ZashtoNe, a Bosnian think tank, organized the policy roundtable Tackling the Kremlin Playbook in Southeast Europe. The round table discussion highlighted the country’s vulnerabilities, kindled by its overtly complex governance system, institutional weakness and state capture. The event engaged a plethora of local and international experts in a vivid discussion on the causes of the current political turmoil and the possible ways out, including Ruslan Stefanov, Program Director at CSD, Dr. Sead Turčalo, Dean, Faculty of Political Science, University of Sarajevo, Deborah Mennuti, Deputy Chief of Mission, U.S. Embassy to Bosnia and Herzegovina, Dr. Vanya Petrova, Senior Analyst at CSD’s Economic Program, and Emir Zulejhić, Researcher from Zašto ne. 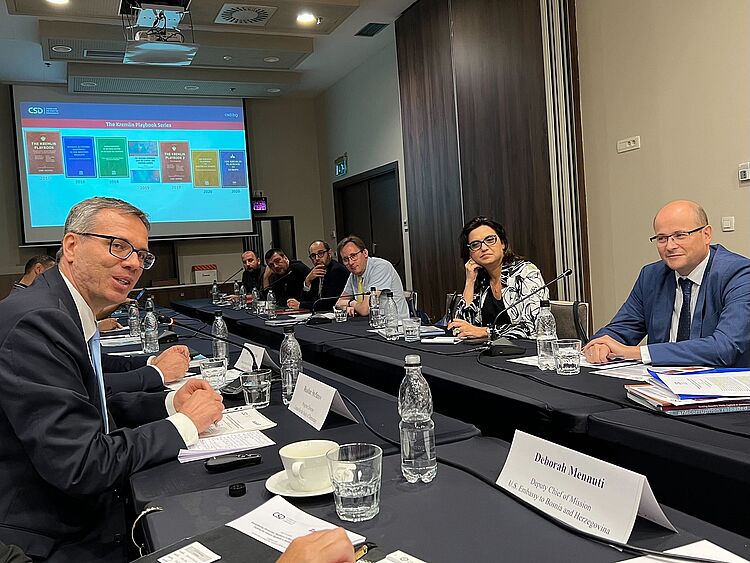