The lack of a sustainable anticorruption solution in Bulgaria is indicative of a far more significant problem - the numerous corrupt relations and dependencies involving high-level officials and politicians, known as state capture. This leads to the formation of systemic flaws such as abuse of public procurement mechanisms, hidden economy, VAT and other tax scams, blocking of law enforcement and control institutions, media capture. These are the conclusions of the Twelfth Anticorruption Policy Forum, held by the Center for the Study of Democracy on 4 July 2016. The forum presented the findings of the Corruption Assessment Report, which examines the level of corruption and the efficiency of the anticorruption strategies and policies in the period 2015 – 2016.

In his opening remarks Dr. Ognian Shentov, Chairman of the Center for the Study of Democracy, stressed that the levels of administrative corruption and state capture in recent years remain unacceptably high. CSD has been monitoring corruption in Bulgaria and supporting the development and implementation of anticorruption policies and measures for the past 18 years. Dr. Shentov elaborated that there are two imperative reforms, both urgent and profound, that need to be placed on the immediate anticorruption agenda of the country: a restart of the system of enforcement and control agencies and establishment of an independent anticorruption prosecution. This requires the active involvement of the three major stakeholders against state capture - reform-minded politicians, civil society organizations and international partners (governments and international organizations).

The Corruption Assessment Report indicates that administrative corruption reached critically high levels in 2014, at a time of strong political instability. There is considerable corruption pressure on most institutions of the control system. Mr. Ruslan Stefanov, Director of the Economic Program at the Center for the Study of Democracy, stated that corruption deals are common at all levels of many public institutions and are very often carried out with the knowledge or the acquiescence of senior executives. Corruption is a systemic problem of the public administration in Bulgaria, and no consistent efforts are applied to address it. CSD developed a specialized monitoring tool, which can measure the discrepancy between corruption risk and anticorruption policies and between the stated objectives and the level of practical implementation of these policies.

The Corruption Assessment Report also notes some good practices, such as the adopted CCTV system by the Traffic Police (assessed positively by 63% of citizens), or the 363,633 violations identified by supervisory institutions in 2014. Despite these measures, the number of people affected by corruption was about 1.3 million in 2015 - 2016. Annually, only about 120-150 court cases (0.01%) finish with convictions.

Mr. Rosen Plevneliev, President of the Republic of Bulgaria, emphasised the importance of public-private partnerships in anticorruption, highlighting CSD’s efforts in this respect. A radical reform in all institutions is needed in order to disentangle existing corruption dependencies. Mr. Plevneliev pointed out that the public has a right to know the truth about failed energy projects such as Belene NPP and Tsankov Kamak. A possible counter-measure he proposed could be the use of electronic records for all projects and contracts, as was the case with lot 2 of the Struma highway. Mr. Plevneliev emphasized that the future anticorruption law can instill intolerance to corruption if its implementation is supported by all institutions. In this sense the fight against corruption requires consensus, not compromise.

So far countering corruption has been based primarily on legislative changes, such as the division of the Supreme Judicial Council in two colleges - magisterial and prosecutorial. Mr Lozan Panov, Chairman of the Supreme Court of Cassation, stressed this is not enough. A greater balance between judicial governance and management is needed and political influence over the courts should not be allowed. Another serious problem is self-censorship applied by some judges because of a sense of loyalty or fear. Mr. Panov described as positive anticorruption news the conviction of two magistrates (a judge and a prosecutor), but at the same time reminded that there are still no high-level politicians convicted for graft and corruption.

While drafting anticorruption measures and laws, politicians must rely on civil society’s independent research and identify the bottlenecks in the practice. Ms Meglena Kuneva, Deputy Prime Minister and Minister of Education and Science, pointed out that such is the case with the Law on Prevention of Corruption and Forfeiture of Criminal Assets. She stressed that the law is demanded and endorsed by Bulgarian citizens. Ms. Kuneva expressed satisfaction with the support of all but one parliamentary represented political parties for the law, and the fact that the law stipulates that the Assets Forfeiture Commission will be part of the future independent body. Anticorruption measures should not stop with the implementation of this law, but should be complemented by the efforts of inspectorates and other institutions.

Ms Rumyana Bachvarova, Deputy Prime Minister and Minister of Interior, said that the findings of the Corruption Assessment Report are an accurate benchmark for the government's work. She thanked CSD for acknowledging the anticorruption efforts of the Ministry of Interior, including the curbing of cigarette smuggling, which brought in hundreds of millions of revenues to the treasury. Ms. Bachvarova stressed that the fight against corruption cannot be limited to only one institution and called for greater cooperation and exchange of information. Ms. Bachvarova noted that corruption sophistication grows faster than the institutions can catch up. Therefore, along with the anticorruption law that would solve some of the problems with corruption at the highest levels of power, there is also a need for developing e-governance, which can limit administrative corruption. The process of opening up public databases in Bulgaria is in its final phase. Currently there are 315-320 of them opened, with about 60-70 remaining, which has catapulted Bulgaria up in the international open government rankings.

Ms. Sonya Naydenova, member of the Supreme Judicial Council, stated that the sense of impunity promotes corruption at all levels, but it is the court that bears the brunt of regaining the confidence of the people. Ms. Naydenova pointed as basic prerequisites for achieving anticorruption success the existence of strong tools for investigations, good personnel policy, non-political interference and lack of concentration of power in one professional position or body. According to her there is ample room for increasing the efficiency of the public prosecution in filing more and better prepared cases for indictment to the Bulgarian courts. In this regard Ms. Naydenova recommended a cost-benefit analysis of the process and an optimization by shifting the focus from small fines and administrative penalties to tackling and solving the most significant cases.

Ms Ekaterina Zaharieva, Minister of Justice put forward the need to strengthen the independence and accountability of the judiciary as the main anticorruption argument. She elaborated that the pivotal role in the fight against corruption belongs to the judiciary, impartial prosecutors, and investigators. Ms. Zaharieva expressed hope that the new Judicial System Act, adopted at first reading, would soon grant the Inspectorate at the Supreme Judicial Council greater authority in the fight against corruption. In parallel with the legislative changes, judges and prosecutors must realize that they are servants of society and not of their institutions or let alone other interests. They must exercise self-control, overcome self-censorship, and cultivate resistance to any attempts at external influence. 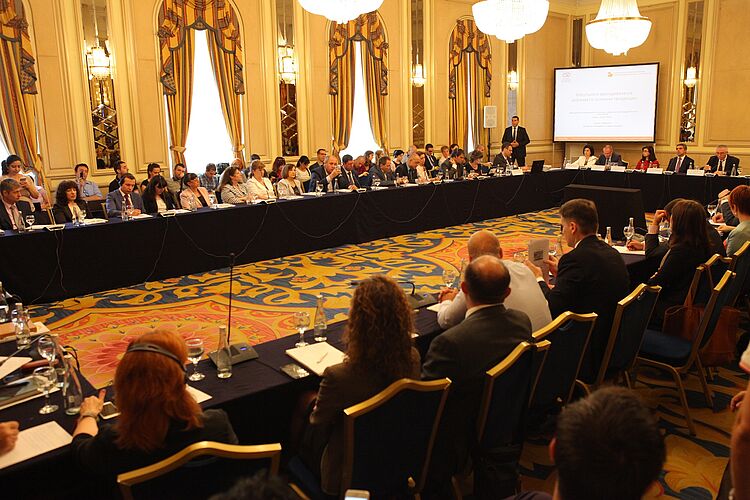 During the Twelfth Anticorruption Policy Forum, held by the Center for the Study of Democracy on 4 July 2016

Dr. Ognian Shentov, Chairman of the Center for the Study of Democracy and Ms Rumyana Bachvarova, Deputy Prime Minister and Minister of Interior

Mr. Ruslan Stefanov, Director of the Economic Program at the Center for the Study of Democracy

Mr. Rosen Plevneliev, President of the Republic of Bulgaria and Dr Ognian Shentov, Chairman of the Center for the Study of Democracy

Mr. Lozan Panov, Chairman of the Supreme Court of Cassation and Ms Meglena Kuneva, Deputy Prime Minister and Minister of Education and Science

Ms. Meglena Kuneva, Deputy Prime Minister and Minister of Education and Science and Mr Rosen Plevneliev, President of the Republic of Bulgaria