The recommendations of State Capture Assessment Diagnostics at the Sectoral Level, a new toolkit by the Center for the Study of Democracy pioneering a three-dimensional approach for the assessment and monitoring of state capture, were discussed at a dedicated policy conference on 29 April 2021. The discussion focused on the key analytical priorities and policy actions necessary for effective monitoring and evaluation of state capture. State capture is “a combination of different forms of corruption which have a single objective: to secure wholesale (by default) and long-term privileges to captors by exploiting the power of governments for private benefit”. For the EU, state capture represents a distinct security threat as the rule of law is crucial to the maintenance of the Union. SceMaps  is an innovative instrument that integrates the public policy traces of the hidden phenomenon by linking corporate, media and public procurement data in a multidimensional platform for monitoring state capture. The proposed toolkit enables EU and national authorities to build risk-responsive policy tools to tackle corruption and state capture in the most vulnerable sectors.

The policy conference included opening remarks from Dr. Anitta M. Hipper, Team Leader for Anti-Corruption, Directorate-General Migration and Home Affairs for European Commission and Ruslan Stefanov, Programme Director for the Center for the Study of Democracy. The keynote speech was on the potential policy options for improving the rule of law mechanism in Europe by Ramona Strugariu, Member of the European Parliament, Renew Europe Group, Committee on Civil Liberties, Justice and Home Affairs (LIBE) and Anti-Corruption Intergroup. The panel discussions moderated by Laura Stefan, Executive Director and Rule of Law and Anti-Corruption Coordinator for Expert Forum included: Dr. Todor Galev, Research Director at the Center for the Study of Democracy, speaking on an integrated approach to state-capture and corruption vulnerabilities in high-risk sectors; Sorin Ionita, President of the Romanian Expert Forum, gave crucial insights into anti-fraud measures in EU public procurement and; Martin Tsanov, the CEO of BizPortal discussed SceMaps online platform and the use of big-data analytics in tackling state capture.

Discussions concluded that we now live in a radically different world than we did when the SceMaps project began. In the recent context of a rising ideological battle between authoritarianism and democracy, anti-corruption is starting to gain greater attention among political leaders as a fundamental democratic value. In response to this, the EC has considerably stepped up its anti-corruption activities with a keen focus on data and corporate transparency. As noted by Dr. Hipper, the degree of ambition within the EU has picked up. Notably, last year's Rule of Law Report highlighted anti-corruption as a key pillar to maintaining democracy throughout the EU. The Union’s increased commitment to anti-corruption efforts can be seen through a slew of counter-corruption legislation to tackle money laundering, protect public procurement, improve whistleblower protection and asset recovery. Another development is the new EU prosecutors’ officer with a mandate to investigate and bring to justice the criminal mismanagement of EU funds. The panel agreed that while the current pandemic has exacerbated the corruption risk among Member States, as Sorin Ionita put it, “this crisis is [also] an opportunity” to invest in the prevention of state capture, increased anti-corruption measures and innovative monitoring instruments. At the policy level, to capitalise on the opportunities born from the pandemic, the EC has ensured that corruption in the business environment must be addressed in every National Recovery and Resilience Plan. Under the new Multiannual Financial Framework the EU has a conditionality mechanism establishing that money coming from the EU budget can be held back in the case of rule of law breaches and the mismanagement of EU budgets.

Ramona Strugariu remarked on the need of a democratic “revolution in society and in the Union” in terms of strong awareness of the need for Rule of Law and anti-corruption efforts. She noted a growing unity in demand from the public, politicians and experts in calls for greater measures to counter state capture. She demonstrated that people in the EU consider the rule of law the most fundamental element of democracy and European values: with 96% of EU citizens believing judicial independence to be crucial, another 94% of people agreeing that court rulings should be respected, and 91% recognising a need for judicial review of the activities of public authorities. Furthermore, Strugariu declared that “on the basis of trust of citizens we should not hesitate to use and improve the instruments that we have” to tackle state capture and uphold the rule of law. She expressed willingness to take up SceMaps recommendations in the work of the European Parliament in the future. 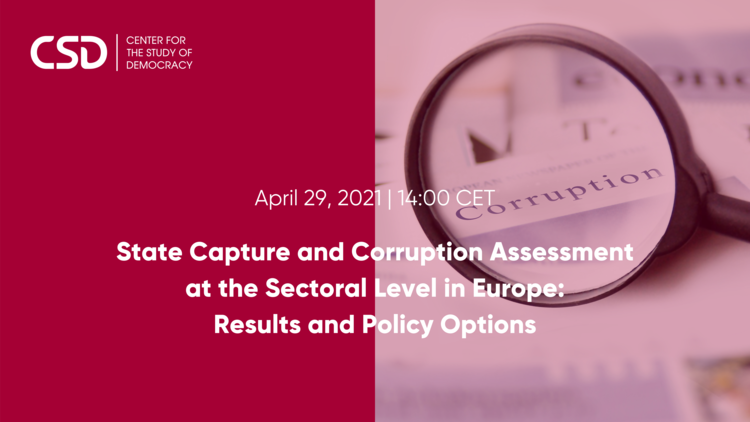