Russia has successfully leveraged its economic influence in strategic sectors to achieve an outsized political influence using sharp power instruments in the political, social and cultural arenas throughout South East Europe. This was the main focus of a roundtable on Sharp power grip: Dimensions of Russian Influence in Southeast Europe in Belgrade, co-organized by the Center for Study of Democracy (CSD) and the National Endowment for Democracy.

During the discussion, CSD experts presented the key preliminary findings of a regional study of the different channels of Russian influence in SEE. Although the Russian economic footprint as share of the region’s economy has gradually decreased since 2014, this is more a reflection of domestic growth and international factors, such as the declining oil prices, the sanctions on Moscow and the following countersanctions, rather than a decline in the scope of the Kremlin’s influence. Despite shrinking structural, bilateral deficits, Russia has been able to leverage its monopoly over energy markets in the region, to lock-in countries in long-term, politically-driven and costly infrastructure projects undermining the independence of the decision-making of key institutions and state-owned companies. Roughly EUR 10 billion in Russian capital has entered the region since 2006, most of it invested in purchasing strategic assets in the energy sector but also in a number of other areas including infrastructure, banking and finance, real estate and the media. In many instances, the Russian economic presence has been channeled through non-transparent capital inflows, often from offshore jurisdictions.

The participants in the discussion maintained that the Kremlin’s penetration into the regional economy is enabled by domestic institutional weaknesses as well as the lack of assertive political involvement from the EU and the U.S. The Russian economic interests are often supported by local oligarchic networks which have close ties with the government or with influential policy elites. In this network of state capture, Russia has been able to sustain its position through a series of sharp power amplifiers including the spread of disinformation, the sponsoring of sports and cultural entities, and the direct or indirect financing of fringe political parties.

The presentation of the key findings of the study set the tone for a policy-oriented debate that brainstormed a series of measures for national governments and international actors. Among the recommendations on a national level, the fight against grand political corruption emerged as the main theme. The experts advocated measures including competitive public procurement procedures, more independence for key regulators, and the development of robust anti-money laundering authorities including on EU level.  The speakers underlined the need for a free and transparent media environment and more active public diplomacy in the region. There is also a need for greater cooperation between civil society and independent liberal-minded political actors.

On a European and international level, the policy experts advocated greater involvement from the EU and the U.S. not only in terms of more investment in strategic economic sectors and the improvement of the macroeconomic environment, but in winning over the hearts and minds of local populations through stronger engagement in socially impactful religious and cultural initiatives. The discussion emphasized the need for building up the region’s resilience against foreign malign influence via a more assertive, multilateral political and diplomatic involvement from the West. 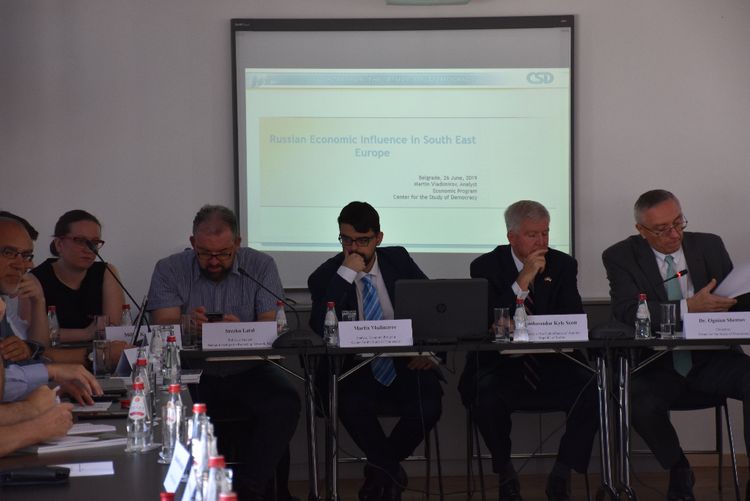 The participants during the round table "Sharp power grip: Dimensions of Russian influence in Southeast Europe", 27 June 2019, Belgrade

The participants during the round table "Sharp power grip: Dimensions of Russian influence in Southeast Europe", 27 June 2019, Belgrade

The participants during the round table "Sharp power grip: Dimensions of Russian influence in Southeast Europe", 27 June 2019, Belgrade
Related