On 22 February, 2005 at the Boyana Conference Center Coalition 2000 hosted the Seventh Anticorruption Policy Forum. The Forum, organized annually by Coalition 2000, is a high profile public event for anti-corruption initiatives, supporting the efforts of the civil society and public institutions in the fight against corruption.

“... The Seventh Anticorruption Policy Forum is another proof of the fact that admitting the existence of a given problem is the first step towards its solution. Discussing the problem of corruption in Bulgaria went through different stages: from private conversations in restricted circles, through journalistic materials and reports of nongovernmental organizations to formulating of governmental strategy for counteracting corruption and daily work towards its implementation.

At the end of the mandate of the current government, we already have concrete and clearly measurable results in the fight against corruption, which are being recognized by independent sources. One of those results, which we followed with great attention are the corruption indexes of Coalition 2000. According to those indexes since 1998 till the present days the absolute level of corruption deals in the country has decreased twice. The political and practical importance of this figure is undoubtedly enormous.”

"... During the past years Coalition 2000 created and applied in practice a number of effective and beneficial mechanisms and instruments directed towards increasing transparency of institutions and informing the society about the measures undertaken by these institutions in counteracting corruption.”

“... I would like to thank Coalition 2000 and the Center (for Study of Democracy) because they brought forth “on the table” the problem of corruption and started searching for appropriate explanations and solutions of that problem, which is really pertinent in each democratic society. This Forum has a specific significance due to the fact that it summarizes the efforts of the Bulgarian society directed towards managing and restricting of one of the most worrying phenomenon of the present day – corruption.

We have to point out the important fact that the anticorruption initiatives, and above all, the initiative of Coalition 2000, have turned into one of the most successful formula for including the civil society in the formulation and support of present reforms. Furthermore, the readiness of some successful politicians and their parties to benefit from the intellectual and moral resources of the civil society helped towards the denouncing of the vicious practices and bureaucratic barriers created by previous governments.”

“... In fact Coalition 2000 has done a lot of work. It has done a very good work especially in bringing out into light and putting under discussion the problem of corruption. Nowadays, when we summarize the results, one fact stands out: the total number of corruption occurrences decreases, whereas the size of wealth acquired through corruption increases. The most elementary reasoning shows that due to the increase in the risk for committing a corruption-related activity, the size of the bribe accepted by civil servants also increase. Why does this risk increase? First, because of the activities of Coalition 2000 and other organizations there is already in place a big intolerance in the society against corruption. The social intolerance is shown in the attitude of ordinary people, as well as expressed in a fear of being exposed through the media; it is also shown in the fear from penal provision.

When there are corruption practices, when the state allows the creation of such practices, the activities of an organization like Coalition 2000 to bring them into light and to expose them are beneficial.” 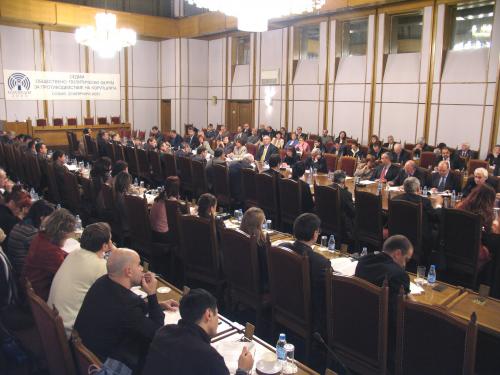 Participants at the Forum