On 28 April 2015 the SELDI initiative held in Belgrade a policy advocacy workshop dedicated to corruption and energy governance. The event was co-hosted by the "Transparent Energy Governance in CEE" project, funded by the Alumni Engagement Innovation Fund of the U.S. State Department. The workshop marked the beginning of SELDI’s work in delivering anti-corruption solutions in the energy sector in Southeast Europe. The sector has been identified in SELDI’s Regional Anti-Corruption Report as one of the highest corruption risk areas in the region. State capture threats have raised concerns about the region’s capacity to implement EU energy-sector regulations, but have also made the countries vulnerable to illegitimate and/or criminal inside and outside pressure.

Mr. Boško Mijatović, President of the Center for Liberal‐Democratic Studies, Serbia and Mr. Ruslan Stefanov, Director of the Economic Program at the Center for the Study of Democracy, Bulgaria and SELDI Coordinator opened the workshop by presenting the main objectives of the event.

Ms. Milica Bozanic, Assistant Director for International Cooperation, Serbian Anticorruption Agency highlighted the role of the agency in strengthening the institutional and professional integrity of the public bodies and personnel. She noted the economic importance of the energy sector for all countries in the region and pointed out that one of the main corruption risks lies in the process of issuing energy licenses. She stressed that Serbia needs to harmonize its procedures with the EU ones, and limit the discretionary power of the licensing officials.

Dr. Boris Begović, Senior Fellow at the Center for Liberal‐Democratic Studies made an overview of the changing patterns of corruption in Serbia. According to him, in the last ten years the contact of the population with the public administration has decreased, resulting in reduction of the previously dispersed and small scale corruption. At the same time however the corruption schemes became more centralized, and began to involve officials at the highest political level. Dr. Begović stressed that the existence of anti-corruption legislation and strategies will remain insufficient until the public institutions become respected and recognized by the population.

Ms. Valentina-Andreea Dimulescu, Project Coordinator, ANTICORRP and Researcher, European Policies and EU Funds, Romanian Academic Society (SAR) underlined that despite the increased corruption control and numerous arrests, Romania is still considered to be one of the most corrupt states in the EU. This is due to the retained political influence of certain individuals even after each change of the government. There are accusations of politically motivated arrests. Among the remaining challenges are the recouping the financial damages, willingness of MPs to vote in favor of lifting their colleagues’ immunity, extended confiscation of illegally obtained assets, maintaining the institutional stability of the anti-corruption bodies, etc. An analysis performed under the ANTICORRP project reveals that the corruption risks in the construction sector and procurement are substantial. In the period 2007-2013, about 21% of the single bidding contracts went to “favored” firms such as political party donors. Another SAR research shows that public officials with decision making power tend to receive a suspended sentence for corruption crimes in comparison lower ranking public officials, and EU funds frauds are among the most common grounds for conviction.

According to Mr. Munir Podumljak, Executive Director of Partnership for Social Development (PSD) there are some success stories in Croatia, such as the work of the Bureau for Combating Corruption and Organized Crime (USKOK). The USKOK judges, prosecutors and police apply short procedures and pass quick sentences, similar to the procedures of the Italian anti-mafia system. At the same time however this system remains is highly politicized and lacking the trust of the people. Mr. Podumljak discussed the application of the Croatian Public Procurement Law, which is among the most advanced pieces of legislation in the area. Despite this fact, an in-depth analysis of public procurements data has uncovered that private companies rarely win government contracts through competitive procedures; the public procurement contracts are controlled by the public sector. For example, about 90% of the value of construction sector public procurement contracts is awarded to public or privatized companies.

Mr. Martin Vladimirov, Analyst at the Economic Program of the Center for the Study of Democracy, Bulgaria discussed the energy governance deficits and methods for tackling corruption and state capture risks. He underlined that the integrity of oversight institutions in the Bulgarian energy sector if often breached and that there are problems with the management of the state-owned energy enterprises.

According to Mr. Andrej Nosko, Senior Program Officer, Open Society Foundations (OSF) and SELDI International Advisory Board Member corruption is an individual moral failure. He recommended that CSOs analyse the distribution of money and power, the people designing legislation, the lobbing procedures, how legislation is implemented, and impunity granted. He proposed as analytical and communication tool the use of an Index of State Capture, which could convey this complex phenomenon, and allow comparison across countries. He also explained that the energy sector is a good case for showing and analyzing corruption on all levels.

Dr. Todor Galev, Senior Analyst, Economic Program, Center for the Study of Democracy, Bulgaria introduced to the audience the energy security as a concept - reducing import dependence, increasing the number of suppliers, utilisation of indigenous resources, introduction of the energy-efficient technologies. He noted that the main energy security challenges and risks in Bulgaria include the high energy expenditure intensity, the energy poverty (40% of the Bulgarian population is energy poor), the fossil fuels imports, the oil and gas import dependence, the energy governance deficits. He recommended that CSOs from the region analyze the governance and financial development of state-owned-enterprises in the energy sector, public procurement contracts, and large infrastructure projects. Dr. Galev underlined that large energy infrastructure projects have been launched based only on political decision, without any unbiased needs assessment. The major ones resulted in the accumulation of half of the debt of the Bulgarian National Electric Company (NEC). He concluded by stressing on the importance of a comprehensive and in-depth monitoring of the energy policy development.

Ms. Eugenia Gusilov, Managing Director, Romania Energy Center (ROEC) presented the implementation of the Government Emergency Ordinance 109/2011, concerning the corporate governance of public enterprises. The Ordinance sets the framework for recruiting the private management of SOEs based on professional qualifications, and requires the use of management and administration plans. An Order from 2014 obliges all SOEs to publish their sponsorship contracts. Romania achieved increased awareness of the issue, and strengthened the communication and cooperation between the companies and the authorities. The implementation of these regulations however is lacking, as there are no efficient sanctions and not all SOEs comply. She concluded that a lot of work still needs to be done in order to regain the trust of the foreign investors.

Mr. Bojan Kovacic, freelance expert, IVLP alumna and former Deputy Director of the Serbian Energy Efficiency Agency warned that many laws are adopted without public debate. He expressed his concern that there is too much political influence in the energy policy-making. He shared his ideas for improvement of the management of public enterprises, such as setting realistic goals, decreasing the corruption risks in public procurement, regional and international cooperation, and strong political will.

Ms. Leila Bičakčić, Executive Director, Center for Investigative Reporting (CIN), Bosnia and Herzegovina presented several cases of corruption and other malpractices in the construction of thermal power plants. She noted that the Serbian government has changed the legal framework to accommodate these investments. According to her, there are cases of national resources being used as guarantee for a private investor loan. Ms. Bičakčić stressed that the citizens should be better informed about their rights, and CSOs can play important role in that respect. Additional information is available on the Energy Prospects in BiH website www.cin.ba/energopotencijal prepared by CIN reporters based on public data.

During the discussion Mr. Andrej Nosko, Senior Program Officer, Open Society Foundations (OSF) and SELDI International Advisory Board Member underlined that corruption results in energy poverty of the population. He recommended that CSOs work with investigative journalists and activists in order to achieve better impact and awareness. At the moment decisions in the energy sector are taken based solely on the technical evaluations, thus evading political responsibility and consequences. There should be wider public debate on all energy related issues.

Dr. Todor Galev, Senior Analyst at the Economic Program of the Center for the Study of Democracy presented the analysis and advocacy tools that CSOs can use for improving energy sector governance. He recommended several research methods, sources of information and approaches for obtaining additional data on financial and management indicators of energy state owned enterprises, large infrastructure projects and public procurement contracts. 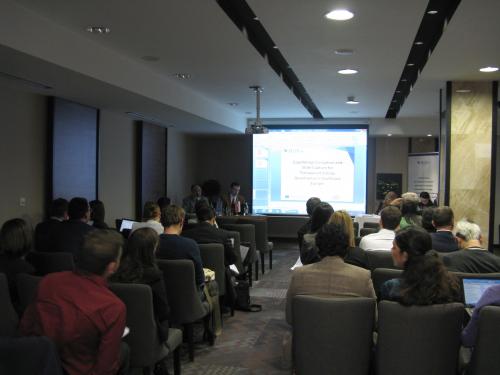 Mr. Boško Mijatović, President of the Center for Liberal‐Democratic Studies, Serbia and Mr. Ruslan Stefanov, Director of the Economic Program at the Center for the Study of Democracy, Bulgaria and SELDI Coordinator

Mr. Boško Mijatović, President of the Center for Liberal‐Democratic Studies, Serbia (left) and Mr. Ruslan Stefanov, Director of the Economic Program at the Center for the Study of Democracy, Bulgaria and SELDI Coordinator