Developing and implementing effective responses to Russian influence in Europe and on the Balkans was the key topic of discussion of a round table organised on 14 November 2019 by the Center for the Study of Democracy and the Konrad Adenauer Foundation in Sofia, Bulgaria. Dr. Ognian Shentov, Chairman of the Center for the Study of Democracy, opened the conference emphasising that the focus of the actions should be on the governance deficits in Europe and not so much on Russia’s strategy. Mr. Thorsten Geisler, Director of the Konrad Adenauer Foundation in Sofia, welcomed CSD’s initiative in organising the event and acknowledged that it is now very clear that the EU cannot engage with Russia on the same terms as it does with other democratic countries because Russia is an authoritarian power. As such, the Kremlin does not follow the same rules of engagement and Europe needs to act accordingly.

Mr. Ruslan Stefanov, Director of the Economic Program at the Center for the Study of Democracy, presented CSD’s latest analyses on Russia’s economic footprint in Europe. Paradoxically, some European countries’ exposure to the Kremlin’s economic leverage in Europe has increased after the imposition of EU and US sanctions. On the Balkans, Russian companies control between 5 and 10% of the total company turnover, a decline since 2014. Yet, the Kremlin’s sharp power based on state capture mechanisms has remained potent across the region in both EU and non-EU countries. Energy remains the single most vulnerable sector for Russian influence in Europe.

In ascertaining the efficacy of Western sanctions on Russia, Dr. Michael Carpenter, Senior Director of the Penn Biden Center for Diplomacy and Global Engagement, made the case that, thus far, these have not been effective, on account of misunderstanding what type of sanctions would yield results. In order for sanctions to be of effect, they must target specific issues, particularly Ukraine and interference in elections. They must also be reversible and cease when the Kremlin has altered its behaviour, and, most importantly, they should in all cases yield consequences. Additionally, the targeting of the financial sector, noted as having the highest potential for yielding results, could mirror those currently undertaken against Iran, along with being incremental and increasing in intensity, for example, targeting an increasing number of banks over time.

Mr. Rosen Plevneliev, President of the Republic of Bulgaria (2012–2017), insisted that Russian influence needs to be recognised for what it actually is – hybrid warfare. He brought up a number of specific examples from Bulgaria, which demonstrated Russia’s relentless hybrid warfare against the country, including cyber-attacks on a Bulgarian referendum, plotting to remove from office a democratically elected government of the country, funding of political parties, and attempts at taking over important economic assets. President Plevneliev noted, though, that Bulgaria alone cannot fend off its much bigger neighbour. He argued that financial sanctions would only become effective when the Western banks refuse to refinance the debts of Russian oligarchs’ banks, which control by the Kremlin’s bidding 90% of Russia’s economy.

Mr. Traicho Traikov, Minister of the Economy, Energy and Tourism of Bulgaria (2009–2012), provided a glimpse into Russia’s influence in the energy sector in Bulgaria, in particular the grand geopolitical project South Stream and Belene. He pointed out that the European Commission and fellow Member States’ ministers had repeatedly refused to confront Russia when asked to protect European interests in the gas sphere. He concluded by saying that Europe can only succeed in countering Russian influence by standing together and not allowing to be played against each other as in the case of South Stream. 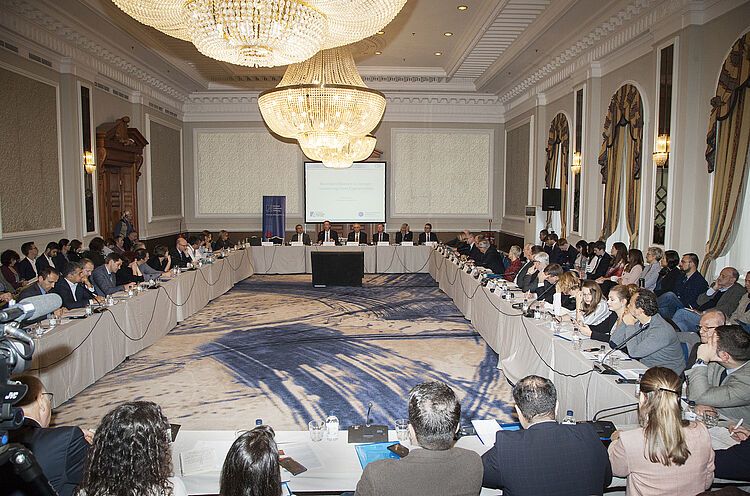 Dr. Ognian Shentov, Chairman, Center for the Study of Democracy

Rosen Plevneliev, President of the Republic of Bulgaria (2012–2017)

Traicho Traikov, Minister of the Economy, Energy and Tourism of Bulgaria (2009–2012)

The participants in the Round Table 'Russian Influence in Europe: Countering State Capture Risks', Sofia, 14 November 2019