Round Table: The German Transition to Renewable Energy Sources - Impact on the European Energy Policy

Round Table: The German Transition to Renewable Energy Sources - Impact on the European Energy Policy

On 6 June 2012, the Center for the Study of Democracy hosted a round table discussion on Germany’s transition to renewable energy sources and the potential impacts of this transformation on European energy policy.

Dr. Ognian Shentov, Chairman of the Center for the Study of Democracy, initiated the discussion of Germany’s experience of radically changing its nuclear policy towards a predominantly renewable economy, and the opportunity that this provides for different green energy technologies and innovation.

Mr. Dieter Janecek, Chairman of the Green Party of Bavaria, opened by stating that Germany has made many crucial decisions in the last 20 years that have impacted its industry and economy. He highlighted a number of motives for Germany’s transition to renewable energy sources, including еmployment - the energy transition process has opened up opportunities for new players and markets. In particular, green technologies such as solar PV, geothermal, wind, and hydro have led to a number of jobs being created. Lack of fossil fuel sources – there are no sources of fossil fuels within Germany. Creating energy from renewable sources within the country, rather than importing it from other countries, will have significant benefits for Germany. Lack of support for nuclear power – an initial decision was made to stop using nuclear power in 2000, and following the nuclear disaster at Fukushima in 2011, there is a general consensus in Germany that the risks of nuclear power are too high. Bottom-up pressure – there is currently around 80 – 90 % support for a transition to greener and cleaner energy from German people.

Mr. Janecek acknowledged that there are challenges to be faced, such as the fluctuating nature of energy produced from renewable technologies. However, he believes that there are significant opportunities for Germany in becoming a key player in the green energy market.

Ms. Denitza Mantcheva, Policy Analyst at the Center for the Study of Democracy, acknowledged Germany’s achievements in its transition to a low carbon economy, most notably, the recent record of energy produced from solar power in the country. She highlighted two key challenges that Bulgaria faces in implementing similar energy policies: lack of ownership and understanding of green energy policies from either policymakers or the general population; and affordability – Bulgarians are not generally willing or able to support renewables, if this would involve notable increases to their own electricity bills.

Mr. Ilin Stanev, Editor of Capital Weekly and Economedia, agreed with concerns over the lack of ownership of green policies in Bulgaria noting that this lack is causing a governance chaos. He highlighted the use of inaccurate data both in terms of costs and outputs of renewable energy, which make it difficult to estimate how much renewable energy is required to meet targets, how many planned schemes are viable, or to bolster consumer confidence. He also noted that faulty predictions of energy use in Bulgaria have been used to build the case for extra nuclear and fossil fuel power stations.

Mr. Ruslan Stefanov, Director of the Economic Program at the Center for the Study of Democracy, moderated the round table debate, in which Mr. Janecek addressed attendees’ concerns by highlighting the importance of a step by step transition and long term planning processes to ensure security of energy supply and appropriate grid capacity; outlining the advantages of renewable energy in terms of more stable fuel prices; and speaking about the challenges of encouraging the use of greener cars and other modes of transport. The discussion focused on creating a bottom up approach to renewable energy in Bulgaria, which necessarily involves the existence of a stable democracy. 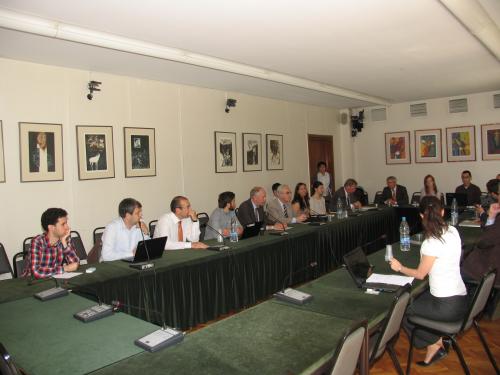 The participants at the dicussion.

Mr. Dieter Janecek, Chairman of the Green Party of Bavaria

Ms. Denitza Mantcheva, Policy Analyst at the Center for the Study of Democracy

Mr. Ruslan Stefanov, Director of the Economic Program at the Center for the Study of Democracy
Related