On 18 October 2012 the Center for the Study of Democracy organized a round table on the topic “Strategy for Registration Reform: 10 Years Later”. Participants in the event,organised with the support of the Open Society Foundation - Budapest and the Think Tank Fund, included representatives from the Ministry of Justice and other government agencies, prominent legal professionals, experts in the area of information technology, representatives of non-governmental organizations and the media.

In her opening remarks, Dr. Maria Yordanova, Director of the Law Program of the Center for the Study of Democracy, welcomed the participants and stressed the importance of continuing the discussions on the Bulgarian registration reform. Dr. Yordanova highlighted the contribution of the Center for the Study of Democracy throughout the years of legislative and practical effort on the subject, including the establishment in 1997 of the Central Pledges Registry– the first centralized registry in Bulgaria; the legislative framework of electronic document and electronic signature (in 2000); the preparation of the first detailed concept of comprehensive registration reform in Bulgaria (2001-2004), reflected in the government`s Plan for Implementation of the 2004 Strategy for Electronic Government; and the first government Strategy for Registration Reform in 2005. Dr. Yordanova noted that the achievements made so far, especially with regard to the Commercial Registry, undoubtedly highlight the advantages of electronic registration. She emphasized the transparency and predictability of civil turnover, though the establishment of Central Registry of Legal Persons and integration of information on persons and property into a consolidated Electronic Registries Center, as the fundamental goal of the updated strategy for registration reform, proposed by the Center for the Study of Democracy.

Ms. Denitsa Valkova-Petkova, Deputy Minister of Justice of the Republic of Bulgaria, spoke about the recent measures, undertaken at the beginning of the year, to improve the performance of the Commercial Registry: overcoming delays in the process of applying for registration and introducing a deadline of three working days for completion of the registration procedure; effective approach to using short text messages for informing all interested persons in the event that an inquiry is made into any entity within the Commercial Registry, in order to eliminate the practice of "stealing companies"; improving the capacity of the Registry’s computer system as an answer to the notorious delays during the period of announcement of the Annual Financial Statements, by purchasing new computer servers. Other measures, aimed at reducing the administrative burden on citizens, foresee amendments of the Law on Accountancy, with regard to the introduction of a Single Entry Point, as well as the possibility for certificates of criminal record to be issued electronically. The Deputy Minister also highlighted several problem areas, mainly with regard to the lack of progress in establishing a single electronic Registry of Legal Persons and Central Property Registry.

Ms. Valkova-Petkova presented the main pillars of the concept for e-justice, developed by a working group at the Ministry of Justice, with the participation of the Center for the Study of Democracy. The concept is divided in two stages. The transitional phase, planned for realization within three years after the adoption and entry into force of the laws on amending and supplementing the procedural codes, the Law on the Judiciary and the Law on Electronic Government, includes a single portal and operational standards for electronic justice, developed by the Supreme Judicial Council. It is envisaged that at the beginning of second stage, all judicial authorities work by means of unified information systems and are able to provide for electronic procedural steps and certifications. The ultimate goal is for every single case file to be available electronically, thus excluding the possibility of losing information, manipulation and non-transparency.

Mr. Dimitar Markov, Senior Analyst at the Law Program of the Center for the Study of Democracy, presented the milestones of the Center`s proposed updated strategy for establishment of Central Registry of Legal Persons and Electronic Registries Center in Bulgaria. Mr. Markov directed the audience’s attention towards the state of the country`s registration system in the context of the implementation of the Strategy, adopted by the Council of Ministers in 2005. He noted the partial implementation of establishing a Central Registry of Legal Persons, while pointing to various types of legal persons, excluded from the currently available central electronic registries. The updated Strategy provides for integration and increased transparency through two implementation phases. The analytical stage aims at providing in-depth, including financial, analysis of the current situation, allowing for the formulation of specific measures, adequately responding to the identified needs. The legal and technical phase includes the drafting and adoption of a Law on the Central Registry of Legal Persons and the related secondary legislation, amendments in the legal framework of legal persons and the Registry Agency, as well as the actual development of the Registry, which should be compatible with the Commercial Register and should be entrusted with the Agency. A consequent phase also foresees re-registration of all legal persons into the newly established central registry.

Mr. Todor Yalamov, Senior Analyst at the Economic Program of the Center for the Study of Democracy, addressed the problems associated with the registration of non-governmental organizations (NGOs). The lack of transparency, as well as the numerous individual registries of libraries, school boards, sports clubs, participation of municipalities in NGOs, etc., which often lack adequate data on finance and participating persons, were identified as major problems. Administrating these registries, on the other hand, consumes considerable financial resource, which proves groundless in the absence of functionality and completeness of data. Overcoming these issues requires amendments in legislation and improvement of coordination among various governmental departments.

Mr. Alexander Kashumov, attorney-at-law and Head of the legal team at the Access to Information Programme Foundation (AIP), expressed his support to the updated Strategy, while also stressing the international commitments undertaken by Bulgaria. These commitments are not only in the context of the EU, within the framework of Directive 2003/98/EC of the European Parliament and the Council on the re-use of public sector information, but also in terms of international initiatives, as Bulgaria has become party to the Open Government Partnership (OGP). According to Mr. Kashumov, problems exist with regard to the update of available information and the search-engine capacity of the NGO Registry at the Ministry of Justice. He shared AIP`s experience in assessing websites and submitting electronic applications to the administrative structures within the Bulgarian executive, and noted some of the identified weaknesses, mainly with regard to the absence of unified standard of file formatting for presenting the information.

During the ensuing discussion, Associate Professor Georgi Dimitrov, Chair of the "Law and Internet" Foundation, highlighted the complexity of registration reform, which includes serious considerations of technological neutrality and financial backup. Mr. Krasimir Dobrev, lawyer and journalist at Sega Daily stressed that it was inacceptable for the practice of the court registration of associations and foundations to continue. He justified the need to move towards an administrative registration system, by stating that this would significantly reduce the court`s workload, thus allowing it to concentrate on its core judicial activities, while also facilitating and shortening the registration process and increasing its transparency. Mr. Julian Mitev, Executive Director of the Registry Agency, noted that despite the lack of cadastral maps, an initiative to start the work on establishing a Single Property Registry exists, while the cadastral maps would be added later on. Ms. Natasha Boseva, Director of the Central Pledges Registry (CPR) with the Ministry of Justice, stressed the importance of the positive experience of CPR in the process of establishing a centralized electronic registration system in Bulgaria, but noted that the SPR is yet to be made available electronically. Ms. Boseva reminded the audience that the Strategy of 2005 had already foreseen the Registry’s connection to the Commercial Registry and administration by the Registry Agency, as the activities and beneficiaries of the two registries are inextricably linked. Deputy Minister Valkova-Petkova, informed the participants about the initiatives of the Ministry of Justice to improve the performance and accessibility of the NGO Registry, and highlighted the Ministry`s interest in undertaking legislative work in the area of the registration reform. 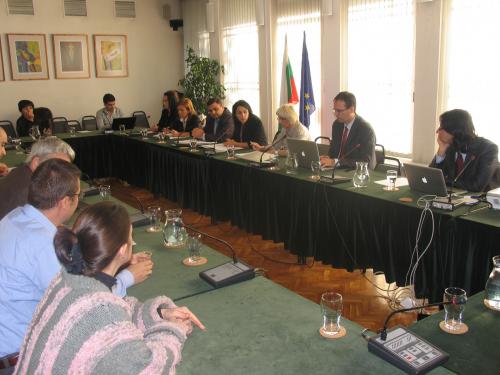 Ms. Natasha Boseva, Director of the Central Pledges Registry (CPR) with the Ministry of Justice

Mr. Alexander Kashumov, attorney-at-law and Head of the legal team at the Access to Information Programme Foundation (AIP)

Mr. Todor Yalamov, Senior Analyst at the Economic Program of the Center for the Study of Democracy

Mr. Dimitar Markov, Senior Analyst at the Law Pogram of the Center for the Study of Democracy