Round table: Public policy challenges for the development of civil society

Round table: Public policy challenges for the development of civil society

On 30 May 2013, the Center for the Study of Democracy held a roundtable on the "Challenges to public policy for the development of civil society". In her opening remarks, Dr. Maria Yordanova, Director of the Law Program of the Center for the Study of Democracy, welcomed the participants and highlighted the importance of the debate and the strategy for registry reform in Bulgaria. She called for joint efforts within civil society, aimed at creating a national electronic register of non-profit legal entities, which would contribute to the fight against illegal practices and ensure more transparency within the sector.

Mr. Ruslan Stefanov, Director of the Economic Program of the Center for the Study of Democracy, presented the Western Balkan countries' experience regarding the relationship between civil society and public authorities focusing on the anti-corruption initiative, recently launched by the Center and its partner organizations. He presented examples of good practices from the region with regards to the interaction between civil society and national governments, which would have a positive effect in Bulgaria as well. Among these practices is the National Foundation for Civil Society Development in Croatia, which aims to provide national co-financing to boost the development of local NGOs. Another example of a good practice from Serbia is the establishment of a specific entity in the Parliament dedicated to working with civil society. Mr. Stefanov concluded his remarks by suggesting that the current situation in Bulgaria allows for civil society and the government to cooperate and establish a similar entity.

Mrs. Pavlina Philipova, a freelance consultant, shared her experience as a former associate in the field of good governance of NGOs in the donor program of the Balkan Trust for Democracy, focusing on the experience of the "Bulgaria Fund". She stressed that the NGO sector should focus its efforts around a few priority areas - competitiveness, information technology, relationship between education and business - areas in which it can have a real impact. It should not be forgotten, however, that NGOs are not only service providers. Therefore, their potential to act as agents in the spheres of advocacy and foreign policy should be taken into serious consideration.

Some emergency measures, which should be undertaken in order to strengthen the NGO sector, include repairing the connection between civil society organizations and citizens themselves, as well as the representativeness and legitimacy of the sector; promoting the process of internal consolidation of the sector, so that it becomes coherent and meets public expectations; establishing a good normative environment and a well-functioning regulatory mechanism in order to ensure transparency and renew citizens’ trust in the sector; establishing financial stability in the sector, resulting in part from the participation in the Structural and Cohesion Funds over the next programming period with facilitated access to resources and reduced bureaucratic barriers; participating in international activities and decision-making at the European level.

Mr. Pavel Antonov, Executive Coordinator of BlueLink.net and social researcher at the Open Space Research Centre, Open University, UK, spoke about self-management in the civilian sector and best practices of civil participation in the implementation of laws with the help of information technologies. He gave examples of the work of the Information Network BlueLink.net and its interaction with the Ministry of Environment and Water. He also talked about successful initiatives implemented online, such as the platforms for reporting illegal logging in forests, urban environment problems and violations of the smoking ban in public places. The lessons learnt as a result of these platforms for public participation reaffirm the need for and benefit of cooperation between NGOs and public authorities. Mr. Antonov concluded that seeing the civil sector as a service provider is a sign that society is forced to think in economic terms. He stressed that until government support is introduced in this field, this idea will only grow stronger. These problems are complex and are the result of the overall decline of the state of democracy. Introducing formal parameters such as an information registry of NGOs will not be enough to address these problems. Such a registry cannot compensate for the need to build on the real potential of civil society to power civil structures. Using the internet facilitates the process, but the state of civil society will only really improve once the functions of its accompanying institutions are stabilized: free media and effective civil authorities.

Mr. Todor Yalamov, Senior Analyst at the Economic Program of the Center for the Study of Democracy, summarized the results of the quantitative analysis of the characteristics of the Bulgarian nonprofit sector for the period 2007 - 2012, which is currently being prepared by the Center. The number of registered NGOs is growing steadily, according to the National Statistics Institute, there are currently around 41,000 organizations of which 40,000 are active (in comparison to 2001 when there were just 1000). Of these, only about 10,000 provide regular annual accounts of their activities. 2700 organizations reported that part of their income derives from commercial activities, which accounts for the majority of the incomes for 1,200 of these NGO’s. Given the weak oversight and transparency of the sector, this trend poses a risk of abuse. The lowest level of transparency is observed in the management of large organizations with an annual turnover of more than 0.5 million leva, currently numbering about 180. Half of them are not registered for public benefit.

Mr. Yalamov reiterated the need for stronger representativeness and legitimacy in the sector. However, this should be not be achieved through internal consolidation, but through the separation of the organizations, specialized in different fields, which will help maintain a healthy variety in the sector and will ensure internal regulation. 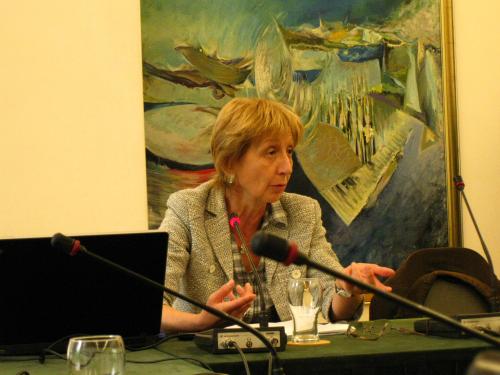 Dr. Maria Yordanova, Director of the Law Program of the Center for the Study of Democracy.

Mr. Todor Yalamov, Senior Analyst at the Economic Program of the Center for the Study of Democracy.
Related