On 12 May 2015, the Center for the Study of Democracy (CSD) organised a round table discussion entitled Institutional Measures to Counter the Financing of Organised Crime to debate the current state of the criminal markets in Bulgaria, particularly the smuggling of illegal cigarettes, the drug market and VAT fraud, as well as the practices used to curb these markets applied rather inconsistently in recent years.
The round table was opened by Mr. Atanas Atanasov, Chairman of the Internal Security and Public Order Parliamentary Committee, and by Dr. Ognian Shentov, Chairman of the Board of the Center for the Study of Democracy. In his opening speech, Mr. Atanasov stated that one of the most effective ways to combat organised crime is to stop the financial flows which support it. He emphasized the importance of the conclusions and recommendations advanced by CSD and expressed hope that they can serve as a foundation for legislative initiatives aimed at establishing reliable mechanisms for addressing the financing of organised crime. Mr. Atanasov noted that the conclusions and recommendations are a result of the continuing cooperation between the non-governmental sector and law-enforcement institutions in Bulgaria, an approach which is productive and should therefore be encouraged and developed further.

Dr. Ognian Shentov pointed that regardless of the decisions of the Council for Justice and Home Affairs to criminalize the financing of organised crime, unfortunately due to a variety of reasons this has happened neither in the European Union, nor in Bulgaria. Dr. Shentov expressed faith that the conclusions and recommendations of the CSD report can bring a positive effect in this regard. Dr. Shentov highlighted an interesting parallel between legal and illegal markets identified by the study – illegal markets work with the same financial instruments that legal markets also use. Therefore, the same instruments should be used to counter the financing of organised crime, which raises the question whether the relevant law-enforcement institutions have sufficient capacity for this. In addition, public-private partnership in the formulation and implementation of institutional measures to counter organised crime financing should be used to its full potential.

Dr. Atanas Rusev, Senior Analyst at CSD, stated that the efforts for countering organised crime are mostly focused on the perpetrators, illegal goods and criminal actions with the aim to capture, convict and imprison the offenders. In the last 20–30 years, though, an additional focus of law-enforcement efforts is money laundering with the aim to confiscate assets obtained through criminal activity. At the same time, another crucial aspect of criminal activity – its funding – remains outside the scope of attention. This aspect is critical, as no criminal scheme could be launched without first being financed. In-depth research has been done of the process of launching a criminal activity and securing the necessary initial capital, as well as of its various sources. The funds can be of both legal and illegal origin, undeclared income being a key source for financing criminal enterprises. Despite the existence of some similar schemes, the amount of initial capital and the money laundering arrangements are essentially different in Bulgaria and the other European countries. Dr. Rusev closed his presentation by outlining some of the possible measures for addressing organised crime financing.

Mr. Tihomir Bezlov, Senior Analyst at CSD, discussed several specific cases, notably the cigarette market in the country. He distinguished between five types of markets and commented on the financial parameters of three of them. On the first type of market illicit white cigarettes (legally manufactured and legally sold) are imported from Greece, and moved around from vehicle to vehicle until their tracks are lost and they “disappear” from Bulgaria and appear elsewhere in an EU country. On the second type of market a legal manufacturer sells legally produced cigarettes without an excise stamp. In 2014, these sales accounted for 70% of the overall illegal cigarettes market. On the third type of market people from border regions bootleg cigarettes bought at duty free-shops and sell them for a profit. Mr. Bezlov also commented on cases of VAT fraud, giving as an example the sugar industry.

Mr. Stoyan Temelakiev, Deputy Director of the General Directorate Combating Organised Crime, declared that the management and staff of the recently restored General Directorate were strongly motivated to tackle organised crime issues, particularly people and drug trafficking, commercial goods smuggling and cybercrime. He examined the effects of the economic crisis on the different illegal markets, including a significant increase in online financial scams, shrinking of the sex services market in Bulgaria as opposed to a rise in people trafficking, and a decrease in heroin trafficking as opposed to an increase of the number of “mules”, motivated mainly by financial reasons. Mr. Temelakiev expressed strong support for public-private partnership in tackling organised crime and in developing the capacity of law-enforcement bodies.

Dr. Phillip Gounev, Deputy Minister of Interior, acknowledged the conclusions and recommendations advanced by CSD. He pointed out that the government is sensitive to the dynamics of criminal markets. One of its recent responses has been the establishment of an Interagency Coordination Center for Combatting Contraband and Controlling of High-Risk Goods and Cargo Transfer which has three main goals: to counter contraband, to produce an anti-corruption effect (through constant video connection with border checkpoints), and to provide risk analysis in which all relevant institutions are involved. In addition, two relevant national strategies are under development – a strategy to counter money laundering and a strategy to curb the shadow economy. Dr. Gounev also underscored the necessity of creating an integrated registry of bank accounts – a tool that would aid significantly investigating authorities.

General Vanyo Tanov, Director of the Customs Agency, commented on the cigarettes market dynamics after 2009. From mid-2013 until late 2014, Bulgarian cigarettes in illegal markets accounted for around 70% of the overall quantity. Since the beginning of 2015, however, as a result of the measures undertaken by institutions, they had not appeared on the illegal market. At the same time, General Tanov was positive that the cigarettes seized at the “incident” at Kaptian Andreevo border checkpoint were captured before transiting Bulgaria, rather than being intended for sale within the country. He expressed hope that institutions would improve their effectiveness in fighting organised crime.

Ms. Galia Dimitrova, Deputy Director for Operational Activities at the National Revenue Agency, presented some of the main achievements of NRA for the past year. Following the introduction of fiscal control measures for high-risk goods precluding fictitious export, during the second half of 2014 revenues collected by NRA exceeded BGN 350 million. A new approach in combating tax fraud is the constant monitoring of mid and high-income tax payers. In 2014, a reversed VAT charging system was introduced, which resulted in additional BGN 200 million of revenue from grain. Cooperation with all law-enforcement agencies has also improved, leading to BGN 750 million more tax and social security payments for the first four months of 2015 compared to the same period of 2014.

Mr. Vasil Panov, Director for Control at NRA dwelt on the complexity of tax fraud where typically there are masterminds and perpetrators (stooges), which greatly hinders effective control on the part of NRA. Therefore, institutions must work together to counteract this type of crime. An example of such cooperation is the recent commissioning of four tax experts to the Supreme Prosecutor's Office of Cassation where they are involved in working on specific cases as part of prosecutor’s office teams. Mr. Panov suggested that online trade in excise goods should be analysed for potential risks. NRA itself has undertaken measures to improve the capacity of its relevant staff.

Mr. Atanas Atanasov closed the round table by commending its work and summarizing the main conclusions. Organised crime can be countered more effectively if coordination between institutions during the investigation phase is improved. Moreover, the role of internal security units and inspectorates at the various institutions in monitoring and disclosing criminal dependencies needs to be strengthened. The latter is particularly important, since part of the resources used to finance organised crime are given out as bribes to state officials in order to cover up instead of uncovering the crimes. 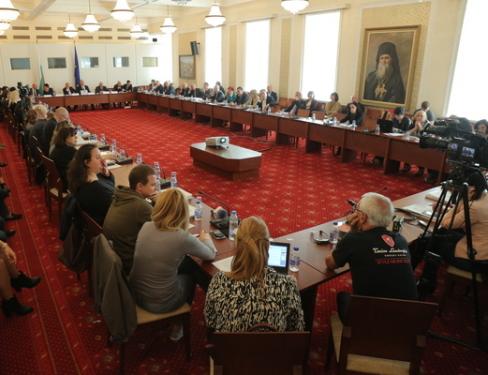 Participants in the Round Table Discussion: Institutional Measures to Counter the Financing of Organised Crime

From left to right: Ms. Roza Georgieva, Head of the Office of the Ombudsman, Mr. Konstantin Penchev, Ombudsman of the Republic of Bulgaria, Ms. Galia Dimitrova, Deputy Director for Operational Activities at the National Revenue Agency and Mr. Vasil Panov, Director for Control at NRA

Participants in the Round Table Discussion: Institutional Measures to Counter the Financing of Organised Crime 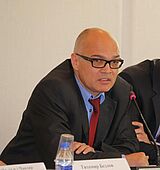 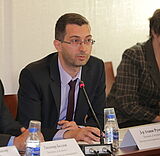 Dr. Ognian Shentov, Chairman of the Board of the Center for the Study of Democracy 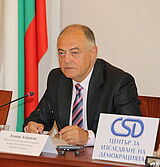