On 11 April 2011 the Center for the Study of Democracy organized a round table to discuss together with a Chinese delegation the potential for environmental and energy cooperation between EU and China.

Mr. Ruslan Stefanov, Director of the Economic Program, Center for the Study of Democracy, opened the round table introducing briefly the topic of environment and energy foresight. He underlined the importance of energy and environmental issues for both regions and noted that cooperation between them is a significant factor. He explained the need of foresight techniques stating that Bulgaria is at the threshold of renewing energy sources and faces important choices concerning the decrease of pollution, building nuclear plants, reducing harmful emissions and etc. Mr. Stefanov introduced a short film representing a future vision on technologies and environmental preservation.

Professor Soon-Thiam Khu, University of Surrey, UK started his presentation with a short introduction into the Spring Project, coordinated by the University of Surrey. The main aim of the project is scoping China’s environmental research excellence and major infrastructure by exploring foresight potentials and designing road maps. This three-year project is cooperation between the European Union and China and is also aimed at helping the European Commission shape the research directions in the field of environmental issues by supporting coordination and developing instruments for research.

Ms. Zoya Damianova, Program Director, Applied Research and Communication Fund, expanded further into the Spring Project focusing on the task of designing the methodology of foresight. She shared some activities performed by the Applied Research and Communication Fund in relation to the project such as organizing debates and foresight workshops. In addition to that, Ms. Damianova put the focus on a key technology survey targeting a great number of researchers and scientists. The expected outcome that she mentioned is a road map for the next 10 years and an expansion of international-level activities.

Professor Wei Meng, Chinese Research Academy of Environmental Sciences, briefly discussed the past environmental research work in China and noted the fast growth of technology development and research in the past thirty years. Wei Meng outlined the strengths of the Chinese environmental protection system which comprises administrative, technological and legal developments aimed at achieving clear targets. He elaborated on the equal effort the Chinese government puts on both economic development and the environment. With respect to the cooperation with the EU, Wei Meng explained that a scientific outlook on economic development is an essential tool for dealing with environment and energy concerns.

The next speaker, Professor Plamen Tzvetanov, Head of Energy Systems Analysis Laboratory, Bulgarian Academy of Science, discussed three main issues in relation to the topic. First of all, he presented models representing the relationship between economic development, energy supply and demand and environmental impact, outlining the complexity of developing an environmental and energy foresight. Secondly, he discussed two research projects – the European ExternE Project and the Cost Assessment of Sustainable Energy Project, aimed at explaining the external cost of energy and environmental impact. Thirdly, he presented the main issues of the book The Electric Energy of Bulgaria. Plamen Tzvetanov noted that the large amount of planned energy projects in Bulgaria is due to an exaggerated energy demand as estimated by the National Electric Company of Bulgaria. He also singled out the fact that Bulgaria is 6.3 times more energy intensive than the average EU-27 which is a problem that needs to be addressed in future discussions. He recommended that future policies put a focus on decreasing the energy intensity rather than increasing the generating capacities.

Professor Hao Wang, China Institute of Water Resources and Hydropower Research, presented the main initiatives in China with respect to hydropower research. He pointed out that China is subject to irregular water supply both in different times of the year and in various regions of the country and therefore, hydropower research aims ensuring balanced water supply throughout the year taking into consideration the impact on the environment. Prof. Hao Wang welcomed the strengthened cooperation between China and the EU and further developments in environmental research. 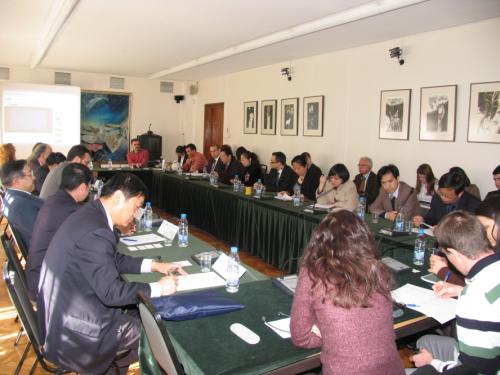 The participants in the round table

Unlocking the Potential for Long-Term Decarbonisation through Green Recovery

Unlocking the Potential for Long-Term Decarbonisation through Green Recovery