Round Table: Energy Security in the Black Sea Region in the Wake of the Ukrainian Crisis

Round Table: Energy Security in the Black Sea Region in the Wake of the Ukrainian Crisis

On 10 June 2014, the Center for the Study of Democracy (CSD) co-hosted at the U.S. Chamber of Commerce in Washington D.C. the roundtable Energy Security in the Black Sea Region in the Wake of the Ukrainian Crisis. The former Prime Minister of Bulgaria Mr. Boyko Borisov was a keynote speaker at the roundtable. Other participants included U.S. businesses, representatives of embassies of Black Sea and Central and East European countries, Washington based policy institutes and academics.

Mr. Philip Finiello, Senior Manager for European Affairs at the U.S. Chamber of Commerce, opened the round table discussions with remarks on the unexplored potential of the transatlantic commercial partnership. He underlined that the Chamber has been a staunch supporter of an ambitious and comprehensive Transatlantic Trade and Investment Partnership (TTIP), especially as recent events in East Europe have shown more than ever it is time to see this agreement operational. Mr. Finiello underlined that cooperation is particularly needed in the energy area.

Mr. Ruslan Stefanov, Director of the Economic Program at CSD, welcomed the cooperation between CSD and the Institute for 21st Century Energy at the U.S. Chamber of Commerce. He underlined the importance of the International Index of Energy Security Risks (IIESR) developed by the Institute for 21st Century Energy for quantifying and exposing the main vulnerabilities of the energy sector in Bulgaria and the Black Sea region countries. Energy security vulnerabilities are particularly exacerbated in certain Central and East European countries including Bulgaria where growth and economic development have been impeded by high levels of energy poverty.

Mr. Martin Tsanov, Analyst, Economic Program at CSD, presented the latest IIESR results for the Black Sea countries included in the ranking. Mr. Tsanov pointed out that Bulgaria, Serbia and Ukraine are among the countries with the highest energy security risk according to IIESR. He added that the main energy security vulnerabilities common for the Black Sea region countries are energy expenditure intensity and import dependence leading to high levels of energy poverty and security of supply challenges. Mr. Ruslan Stefanov emphasized the relationship between high levels of corruption and bad governance and the low levels of energy security in some Black Sea countries. He also discussed the role of EU energy policies and the Russian influence as important external factors in delineating the energy security situation in the region.

Mr. Boyko Borisov, emphasized different opportunities for tackling effectively the challenges of high energy poverty and energy import dependence in Bulgaria. He welcomed future cooperation between the U.S. and Bulgarian businesses in exploring untapped conventional and non-conventional gas reserves in Bulgaria. The former PM emphasized that during the period of his cabinet, a consortium of three European energy companies has been contracted to explore gas reserves in the “Khan Asparuh” block on the basis of competitive tender procedures. Mr. Borisov pointed out that the gas reserves availability promise creates unique spillover investment opportunities for construction of thermal power stations and electricity production that could be exported within the whole Southeast Europe through the well-developed electricity grid of Bulgaria. He expressed his full support for the creation of the European Energy Union, noting that after the Ukrainian crisis, EU leaders had realized the significance of the unified position on major energy sector issues such as common gas price. It would be also easier for the EU and the US to negotiate for LNG supply to Europe through a European Energy Union platform. Mr. Borisov emphasized that investment opportunities in Bulgaria are not limited only to the energy sector and the untapped gas reserves but also include among others tourism, infrastructure, and agriculture.

In the subsequent discussion, Mr. Borisov answered a number of questions related to the development potential of unexplored Bulgarian gas reserves, not only for Bulgaria but also for the whole region. He underlined the expected investment spillover effect that gas exploration and production could bring to other industries and also in terms of job creation and local businesses development. Mr. Borisov discussed opportunities for different gas pipelines passing through the Balkans and once again emphasized the significance the establishment of European Energy Union might have on improving energy security in vulnerable countries in East Europe. He pointed out that infrastructure development in Bulgaria also presents interesting investment opportunities for US and European businesses, however stressing the importance of competitive tender procedures in contracting such projects. 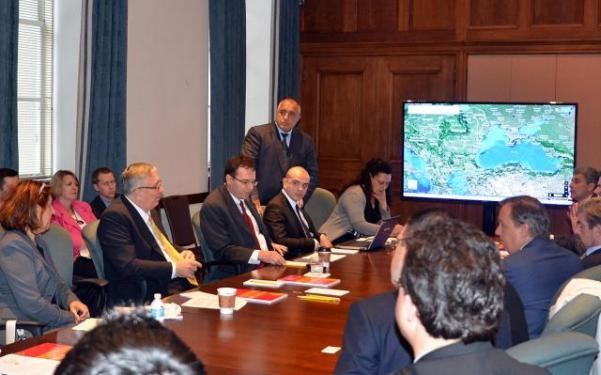 The participants in the round table: Energy Security in the Black Sea Region in the Wake of the Ukrainian Crisis

The participants in the round table: Energy Security in the Black Sea Region in the Wake of the Ukrainian Crisis

The participants in the round table: Energy Security in the Black Sea Region in the Wake of the Ukrainian Crisis
Related