Round Table: Countering Radicalisation and Terrorism Threats in Europe

Round Table: Countering Radicalisation and Terrorism Threats in Europe

On 8 January 2015 the Center for the Study of Democracy held a round table discussion on countering radicalisation and terrorism threats in Europe. The keynote presenter at the event was Mr. Gilles de Kerchove, EU Counter-Terrorism Coordinator.

Dr. Ognian Shentov, Chairman of the Center for the Study of Democracy, opened the discussion and stressed that the latest attacks in France have confirmed that the terrorist threats in Europe, including the phenomenon of radicalisation, can only be addressed through common efforts by government, international and civil society institutions.

Mr. De Kerchove laid emphasis on the alarming nature of the terrorist attack in France. He described recent international and regional developments shaping the terrorist landscape and expressed his concern about the growing threat posed by ISIS as the most resourceful terrorist organisation at the moment, not least due to the increasing number of foreign terrorist fighters (FTF) joining its ranks. Mr. De Kerchove provided a comprehensive overview of the policy response at the EU level, and highlighted the importance the FTF issue has received in a recent legally-binding Resolution 2178 adopted by the UN Security Council. Mr. De Kerchove described the four main pillars of policy measures at the EU level towards countering radicalisation: prevention, detection of suspicious travel, pursuing FTF through criminal law, and external engagement with third countries. He pointed out that prevention is one of the most important pillars, yet there has been a delayed implementation of such measures in the EU due to the difficult and sensitive nature of potential approaches to understanding and responding to factors for radicalisation. There is a pressing need to develop local capabilities at the front-line to recognise early signs of radicalisation processes, in which engaging civil society and local communities plays a key role. In this context, the relationship between the intelligence communities and the local social services is of paramount importance to countering radicalisation and dealing with foreign fighters. He added that the fact that these two have been brought closer is a major success. Mr. De Kerchove touched upon important questions, such as what the motivational factors leading more people to go to Syria are, or how authorities can use the internet pro-actively to deliver a counter-narrative to vulnerable groups. Describing the other three pillars of measures, Mr. De Kerchove laid particular emphasis on a number of challenges, including the need to maximise intelligence sharing through existing tools in order to detect suspicious travel; to pursue foreign fighters through criminal law, but also through alternative measures especially when it comes to returnees.

Dr. Philip Gounev, Deputy Minister of Interior, expressed the view that more debates of this kind should be organised in Bulgaria to foster high-level expert discussion on prevention and countering terrorism. He pointed at the establishment of a Counterterrorism Centre at the State Agency for National Security in 2014 as a step ahead in building the country’s capacity in countering and preventing terrorism. He also underlined that the efforts of the country’s law enforcement to detect, prevent and counter terrorism should be reinforced by cooperation with domestic analytical institutes, as well as with the civil society sector in engaging with local communities. The Deputy Minister posed the question about the possibilities of information sharing with FRONTEX and as regards forecasts on refugee inflows.

Mr. Anyu Angelov, Defence Adviser to the Prime Minister of the Republic of Bulgaria, emphasised the importance of information sharing among Member States as a critical tool in countering terrorist threats. He also stressed the need of further technical and financial support from FRONTEX for the reinforcement of the Bulgarian border with Turkey which is of geopolitical and strategic importance in detecting and countering infiltration of terrorists.

Dr. Emil Tsenkov, Senior Fellow, Security Program, Center for the Study of Democracy, underlined that the civil sector in Bulgaria could play an important role in counter-terrorist efforts by monitoring of radicalisation processes, providing analysis of counter-terrorism response, and fostering bridges of cooperation between law enforcement and local communities.

In the following discussion Mr. De Kerchove answered and commented on a number of questions raised by participants. He emphasised the importance of EU information sharing tools such as Europol, SIS and the enforcement of comprehensive approach to counter terrorism by coherent measures of prevention, detection and pursuit of offenders. He also emphasised that despite the intensified efforts of the EU to confront the foreign fighters’ issue, it needs to continue engaging with vulnerable countries from the Middle East and Africa, including countries of origin, transit or sponsor countries. 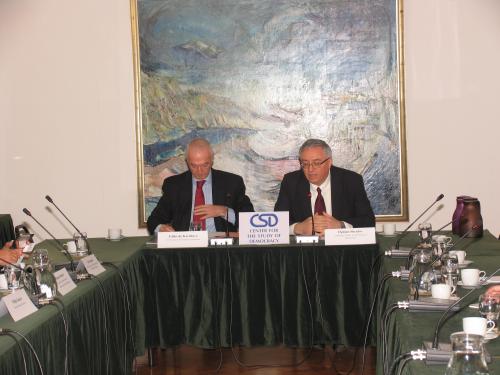 Participants in the Round Table: Countering Radicalisation and Terrorism Threats in Europe

Participants in the Round table: Countering Radicalisation and Terrorism Threats in Europe

Mr. Anyu Angelov, Defence Adviser to the Prime Minister of the Republic of Bulgaria

Mr. Ruslan Stefanov, Director, Economic Program, Center for the Study of Democracy and Mr. Anyu Angelov, Defence Adviser to the Prime Minister of the Republic of Bulgaria
Related