On 29 April 2009 the Center for the Study of Democracy and Applied Research and Communications Fund organized a round table on China’s Innovation System: state and perspectives. Dr. Ognian Shentov, Chairman of the Center for the Study of Democracy and Mr. Zhang Wanxue, Ambassador of People's republic of China in Bulgaria made the opening remarks at the event. Mr. Zhang Wanxue stressed on the importance of the high-technology industry zones and the commercial application of the scientific inventions and expertise in China at the present time, as well as in the past.

Mr. Marin Tinchev, Cofounder and Director of Sinova Advisors and PhD candidate at the Tsinghua University in China presented a bird’s eye view of China’s innovation system. Mr. Tinchev highlighted the fast rate at which China develops its R&D. He described the history and evolution of Chinese innovation system. He also pointed out that currently the Chinese technology focused universities and innovative entrepreneurs are the leaders in the development of the innovation environment. 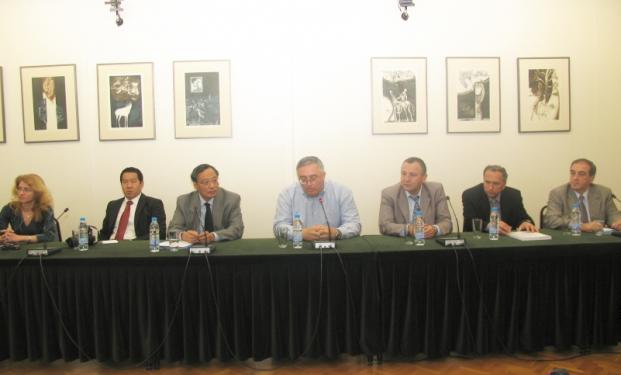 Dr. Ognian Shentov, Chairman of the Center for the Study of Democracy (in the middle) and Mr. Zhang Wanxue, Ambassador of People's Republic of China in Bulgaria (third from the left) made the opening remarks at the event.

Could HRs in the public administration be a force to reckon with domestic violence?