Round table: Benchmarking Corruption in the European Union

Round table: Benchmarking Corruption in the European Union

On 14 February 2007, the Center for the Study of Democracy, together with the Bulgarian Permanent Representation to the European Union hosted a round table on Benchmarking Corruption in the European Union. Keynote speaker at the discussion was Bulgaria’s Minister of Interior Roumen Petkov.

Matters of justice and home affairs, and in particular corruption, have been among the key challenges during the last wave of EU enlargement. Significant efforts have been invested by member states, the European Commission and Bulgaria in meeting these challenges. The European Commission’s policy itself has been changing. While earlier priority had been given to input indicators (regulations, procedures, etc) focus now has shifted to output indicators (actual impact). Member states have also contributed to understanding corruption and recommending action through the mechanism of peer reviews. Still, identifying anti-corruption progress remains largely arbitrary. Corruption – and this is true not just within the EU but worldwide - remains a fluid concept, signifying different things to different people. More importantly, it is an evolving concept. Understanding corruption and obtaining reliable information about its dynamics are crucial to the implementation of successful prevention and control policies.

Against this background, the round table debated a common methodology for benchmarking corruption by taking stock of the experience of Bulgaria’s accession. The discussion was intended as a contribution to a better understanding of the role of corruption monitoring thus further informing the evolving EU anti-corruption policies.

A side event to the Justice and Home Affairs Council meeting, the round table particularly focused on the lessons learned from Bulgaria’s efforts to monitor anti-corruption progress during its pre-accession preparations. Following the welcoming remarks of Ambassador Stanislav Daskalov, Permanent Representative of Bulgaria to he EU, CSD Chairman Dr. Ognian Shentov highlighted the need for a commonly agreed system of measuring corruption and presented the context in which the Center has been developing its expertise in this field over the last nine years.

In his keynote address, Minister Petkov confirmed the commitment of the Bulgarian government to good governance and to specific anti-corruption targets and presented detailed results of the work of the Commission for the Prevention and Counteraction of Corruption which he chairs. Later in the discussion the Minister suggested that a commonly agreed standard of corruption benchmarking should be adopted by the EU.

Mr. Ruslan Stefanov, Economic Program Coordinator presented the latest round of diagnostics carried out by CSD of corruption in the business sector. The overall trend is positive with a reduction in the incidence of bribing in obtaining various utility services and in court proceedings. Businesses are also less likely to be involved in corruption when obtaining public procurement contracts. In general, both “rent seeking” by government officials (pressure on businesses to pay up) and entrepreneurs resorting to bribery as means of obtaining services or contracts are on the decline.

Ms. Lucinda Mac Mahon of the Freedom, Security and Justice Directorate of the European Commission presented the latest work of the Commission in the field of corruption monitoring, the preparations for the 2008 Communication on an comprehensive EU anti-corruption policy and the expert group on crime statistics.

In the following Q&A, journalists from European and Bulgarian media inquired about anti-corruption progress in specific areas. 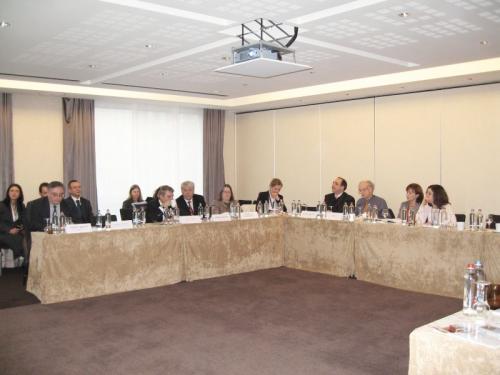