Round table: Austerity and Transatlantic Solidarity

Round table: Austerity and Transatlantic Solidarity

The Center for the Study of Democracy (CSD) held a roundtable on Austerity and Transatlantic Solidarity. The guest of honour was Mr. Frederick Kempe, President and CEO of the Atlantic Council of the United States.

In his brief opening expose Mr. Kempe noted that the current economic crisis, affecting both sides of the Atlantic, should be seen as a crucial turning point in Western history, as were the end of the two World Wars and the collapse of Communism. In particular, it seems that this could turn out to be an existential crisis for Europe. Though the outcomes are difficult to predict yet, the crisis could lead to great institutional changes in the global governance. The US recognizes the EU as a strategic ally, and in fact as its most strategic asset in upholding Western values, but Europe needs to resolve its internal issues and develop a coherent external profile. Europe’s coherence is jeopardized by the widening North-South divide in general, and by the falling out of the Franco-German alliance in particular, as France finds out it is regarded as belonging to the South. Stronger EU-US trade relations are a chance of bringing Europe back on growth track, and are a priority for the Atlantic Council. The current US administration hopes to establish the Transatlantic Trade and Investment Partnership (TTIP) before the end of its term. Mr. Kempe also suggested that the TTIP would be an important factor in keeping the UK in Europe and would be especially effective if Turkey was included in the partnership too.

Mr. Lubomir Christoff, Member of the Bank Stakeholder Group at the European Banking Authority, commented on Mr. Kempe’s introduction by underscoring the importance of successfully overcoming the current euro crisis in order to protect the core values shared by the Atlantic axis. Mr. Christoff implied that austerity measures should not be applied uniformly to all member states as this would lead to unsustainable public debt levels. With regards to the high levels of unemployment and diverging prices and levels of competitiveness between the North and South of Europe, he suggested that the usual rules-based approach of the EU must be replaced by critical analysis and targeted actions.

During the ensuing discussion, the former Minister of Defence Mr. Anyu Angelov addressed the link between economic and security cooperation and implied that the EU crisis is making it increasingly difficult to reach a consensus within NATO. Ambassador Boyko Noev, Senior Fellow of the Security program at CSD, suggested that in this respect NATO allies should review and learn from their experience in the war in Afghanistan, before new conflicts arise. Mr. Todor Tagarev, Minister of Defence closed the discussion and underscored the threat that the crisis might further reduce the level of commitment to defence capabilities of the EU partners in NATO. 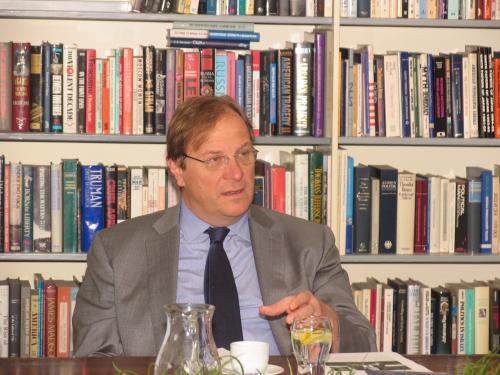 Mr. Frederick Kempe, President and CEO of the Atlantic Council of the United States

Mr. Anyu Angelov, former Minister of Defence of the Republic of Bulgaria

Dr. Ognian Shentov, Chairman, Center for the Study of Democracy

Mr. Todor Tagarev, Minister of Defence of the Republic of Bulgaria

Participants at the round table
Related