In 2015 the Center for the Study of Democracy conducted a survey of 179 regional media with internet platforms across all districts in Bulgaria (with the exception of Sofia city and Sofia district). The survey revealed some alarming trends with potentially damaging consequences for regional media outlets: there is a total lack of independence and, transparency, copyright is not respected even in media based in large regional cities. It is of crucial importance that these issues draw public attention and recommendations to the relevant authorities are made to deal with them.

To this end, on 6 October 2015, CSD with the support of Open Society Foundations Budapest and the Media Program South East Europe of the Konrad-Adenauer-Stiftung, held a seminar on "Regional Media in Bulgaria: the limits of survival". Dr. Lyubomir Kutin, producer and researcher of local culture, introduced the methodology of the survey itself. The current state of regional media was evaluated using the following indicators: density of media content, transparency, pluralism and debate, respect for copyright law, political and economic independence.

Regional media outlets have strong political and advertising dependencies. In terms of content, regional news and topics dominate, but often they are presented in a banal and uncritical way. Purely descriptive texts prevail over analytical content. It turns out that internet media outlets are the most frequent violators of copyright law, as they rarely mention the names of external authors. All this seriously damages the quality of media content.

Mr. Tihomir Bezlov, Senior Fellow at CSD, attempted to explain the reasons for the apparent crisis in regional media with the contraction of advertising budgets outside the capital. He also pointed to the technological crisis of printed media and the chaotic infrastructure as factors influencing its decline. According to Mr. Bezlov, it is vital that along with the identification of problematic areas, a discussion about possible solutions begins right away, such as the creation of networks of investigative and analytical journalists.

Mr. Spas Spasov, journalist at Morski Dnevnik painted the overall picture of regional media, focusing in particular on the problem of funding and the need for a stronger journalist community. In cases where funding is poor, media outlets are forced to seek alternative funding. Moreover, the low wages of journalists make them vulnerable to service contracts offered by the municipality or other economic benefactors. In small towns, media service contracts impose pressure on media. While this is a regulatory issue, the lack of journalistic solidarity between colleagues working in distant areas only deepens the problem.

Mr. Mehti Melikov, CEO of the National Council for Journalistic Ethics, pointed out the problem of disproportionate allocation of finances for communication strategies. He stressed the negative effect from unaccountable radio license issuing by the state in the period 1999 – 2001. Centralized management of the media business was then destabilized through mass distribution of frequencies that led to the secondary market among existing operators. In this connection, Mr. Bezlov explained the economics behind the illicit market for licenses, in result of which smaller radio stations were consumed by larger radio chains.

Assoc. Prof. Georgi Kalaglarski, representative of the Bulgarian Journalists’ Council, suggested such seminars to be held in regional cities rather than in the capital. According to him, a strategy for the development and strengthening of public media across regions is needed. One solution is through the establishment of community councils, which would allocate financial resources fairly and transparently.

Mr. Dimitar Gabrov, SEM expert and journalist, added that until there is a high degree of solidarity among journalists in Bulgaria, any improved funding system could prove inefficient. For example, by introducing a law on the protection of journalistic work this could be avoided -- rightfully earned money would come to their rightful authors, not to editors or consultants.

Ms. Maria Chereshova, chair of the Association of European Journalists, expressed the need to support funding for independent journalism. She suggested the development of “NGO journalism”, i.e. journalists who set up NGOs and apply for the financing of their own projects. There are similar models operating in other Balkan countries; however she expressed concern that decentralization in Bulgaria usually goes hand in hand with corruption. 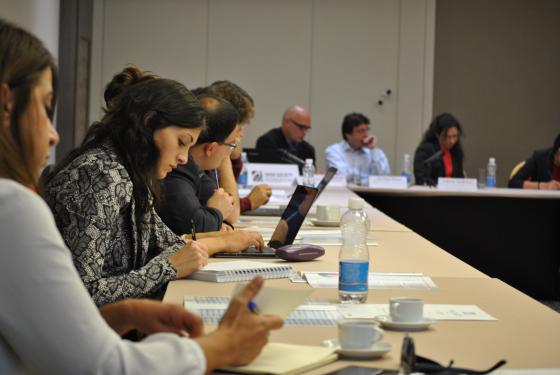