Punishment versus treatment: the situation of drug users in prison

Punishment versus treatment: the situation of drug users in prison

Bulgaria has no clear and consistent state policy on drug-using offenders. This is the main conclusion of the round table on the situation of drug users in prison organised on 7 April 2016 by the Center for the Study of Democracy. The event, which aimed to present the Norwegian experience of working with drug users in prison, was attended by officials from the Directorate General "Execution of Penalties", prosecutors, judges, lawyers, academics and NGOs.

According to Dr Maria Yordanova, Director of the Law Program of the Center for the Study of Democracy, a big part of the persons serving a custodial sentence are drug users or used drugs before entering prison. This requires the application of a set of measures for working with these individuals both during their stay in prison and after their release.

The Norwegian experience, as demonstrated by the presentation of Professor Hedda Giertsen of the Department of Criminology and Sociology of Law at the University of Oslo (Norway), differs substantially from the practice in Bulgaria. Drug-related crimes are among the most common in Norway. Only in 2014 the country registered more than 16 000 cases of such crimes. As in Bulgaria, the possession of drugs is a crime in Norway, but unlike trafficking and trade, it is not regulated in the Criminal Code and the penalties for it are much fewer and usually do not include imprisonment. According to Prof. Giertsen, there are five basic principles which underpin the Norwegian criminal policy. These are reduced penalties (75% of those convicted in Norway leave prison after less than three months); motivation and preparation instead of treatment; equality between inmates and the rest of the population with regard to all rights not limited by the sentence; equal quality of services (health, education, etc.) provided inside and outside the prisons; and uninterrupted relationship of the convicted with society. Norwegian prisons apply various rehabilitation measures with regard to drug users in prison. They are all based on the principle of voluntariness, and in exchange for their participation, prisoners receive certain incentives such as longer holidays, more visits and even the possibility to serve the last part of their sentence in a specialised institution outside prison. As for measures aiming to limit the damage of drug use, Prof. Giertsen noted that the only such measure in Norwegian prisons is replacement therapy. In conclusion, she stressed that in order to be adequate, public policy should primarily answer the question of what drug use constitutes - crime, disease or a social problem.

In Bulgaria the number of convicted persons with drug dependency is on the increase, explained Marieta Tzolova, chief expert at Unit "Social Activities" of Directorate General "Execution of Penalties" at the Ministry of Justice. The most commonly used methods for smuggling drugs into prisons are through hiding them in various items (food, clothing, equipment) when visiting or returning to prison (after leave or work on external sites), through correspondence, and sometimes - through prison staff. Ms Tzolova pointed out that in 2015 Bulgarian prisons registered 150 cases of seized drugs. The prison administration makes efforts to prevent the spread of drugs and to work with targeted groups of inmates. A few of the preventive measures Ms Tzolova mentioned are carrying out searches and inspections, use of scanners and sniffer dogs, training of employees and testing of inmates. Regarding the targeted work with convicts, some of the latter are hospitalised for treatment in the prison hospital in Lovech, voluntarily or against their will, while the rest are placed under the supervision of a psychiatrist, a psychologist and a social worker. The work with drug users is individual and in groups, and the most commonly applied programme is a short-term harm reduction programme. Moreover, Marieta Tzolova added that Directorate General "Execution of Penalties" is open to cooperation with NGOs and places of imprisonment currently implement several NGO projects targeting drug users.

Prosecutor Plamen Pachev of the Supreme Prosecutor's Office of Cassation mentioned that particular measures are needed to encourage drug users in prison to be actively involved in drug addiction countering programmes. He added that preventing the smuggling of drugs in prison is just as important as motivating prisoners to undergo treatment voluntarily. The experience of the Prosecutor’s Office shows that drug users most commonly perpetrate property crimes in order to obtain money for drugs, and crimes against the person when they are under the influence of drugs. Furthermore, Mr Pachev noted that there has been an increase in road transport offences committed after drug use in recent years. He drew attention to the shortage of qualified staff able to work with drug-dependent persons in prison.

Anna Lyubenova of the "Initiative for Health" Foundation held that there are few examples of good practice with regard to cooperation between places of detention and NGOs in relation to drug users. The Foundation works with drug users in Sofia Prison since 2005. Over the past two years it has developed and implemented a model for psychosocial rehabilitation in the closed-type prison hostel in Kremikovtsi where more than 90 drug-dependent prisoners have received long-term professional psychological help. Ms Lyubenova added that the results are positive for most of those who have undergone the programme. 58 prisoners have gone before the Committee for the Implementation of Penalties for regime change, 31 have been moved to an open-type hostel, and 3 have been released on parole. NGOs have the capacity to offer services that are not available in prisons and to significantly improve the situation of drug users. However, studies of the "Initiative for Health" Foundation show that there is still mutual unfamiliarity and mistrust between the prison administrations and the third sector. In addition, the sustainability of NGO activities remains a major problem.

Dimitar Markov, Senior Analyst at the Law Program of the Center for the Study of Democracy, argued that a set of reforms are required to improve the penal policy in relation to drug users. The necessary measures include changes in the type and severity of the penalties provided under the Criminal Code, the unification of jurisprudence on drugs, as well as practical measures aimed at improving the situation of drug users in prisons based on the principle that prisoners should have equal access to treatment and programmes with drug users who are not imprisoned.

The placement in psychiatric institutions is not effective, explained Violeta Bogdanova, Director of the "Guidance and Coordination of Drug Demand Reduction Activities" Directorate at the National Addiction Centre. In her view, hospitalisation should be avoided and therapy should instead be conducted in psychosocial centres. The shortage of qualified staff, including psychiatrists, is a problem throughout the country, not just in places of deprivation of liberty, added Ms Bogdanova.

According to Assoc. Prof. Georgi Mitov, Deputy Dean of the Law Faculty of Sofia University "St. Kliment Ohridski ", most of the discussed measures are indeed necessary, but they are unlikely to be met with political and public support, as public attitudes in Bulgaria are predominantly repressive. He added that financial sanctions are ineffective in most cases since most drug users cannot afford to pay them, and noted that very often drug users become distributors precisely because they do not have sufficient money to purchase drugs.

The main unresolved problems that were identified in the discussion were the lack of accurate statistics on drug users in prison, the inability to serve part of the sentence in an institution for drug users outside prison, and the lack of mechanisms to encourage inmates undergoing therapy to continue the treatment after their release. 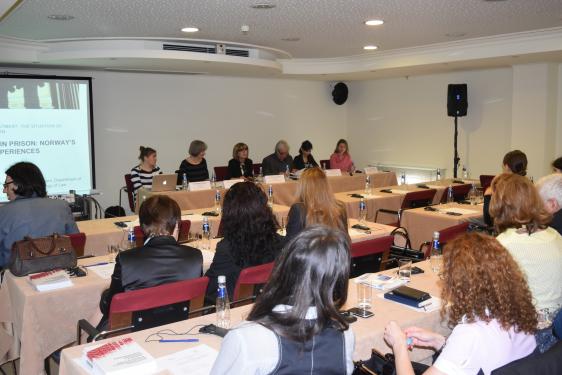 Professor Hedda Giertsen of the Department of Criminology and Sociology of Law at the University of Oslo (Norway), Dr Maria Yordanova, Director of the Law Program of the Center for the Study of Democracy and Prosecutor Plamen Pachev of the Supreme Prosecutor's Office of Cassation

Professor Hedda Giertsen of the Department of Criminology and Sociology of Law at the University of Oslo (Norway) and Dr Maria Yordanova, Director of the Law Program of the Center for the Study of Democracy

Ms Marieta Tzolova, chief expert at Unit "Social Activities" of Directorate General "Execution of Penalties" at the Ministry of Justice

From left to right: Dr Maria Yordanova, Director of the Law Program of the Center for the Study of Democracy, Prosecutor Plamen Pachev of the Supreme Prosecutor's Office of Cassation and Ms Marieta Tzolova, chief expert at Unit "Social Activities" of Directorate General "Execution of Penalties" at the Ministry of Justice

Ms Anna Lyubenova of the "Initiative for Health" Foundation

Mr Dimitar Markov, Senior Analyst at the Law Program of the Center for the Study of Democracy

Ms Violeta Bogdanova, Director of the "Guidance and Coordination of Drug Demand Reduction Activities" Directorate at the National Addiction Centre