On 3 April 2012 the Internal Security and Public Order Committee hosted a public presentation of the Serious and Organised Crime Threat Assessment (SOCTA) report. The discussion was attended by representatives of Europol and the Serious and Organised Crime Agency, who shared the use of SOCTA reports to shape EU and UK policies to counter organized crime. The Minister of Interior and the Secretary General of the Ministry of Interior presented the main priorities and results of law-enforcement institutions in countering organized crime.The roundtable was opened by Dr. Ognian Shentov, Chairman of the Center for the Study of Democracy and Mr. Anastas Anastasov, Deputy Chairman of the National Assembly and Chairman of the Internal Security and Public Order Committee.

In his opening address Dr. Shentov stressed that most countries of the European Union and Europol now produce a national threat assessment of organized crime. In essence, this evaluation is a standard tool for managing the security sector. He explained that the Bulgarian SOCTA discusses and analyzes eight criminal activities that represent the highest risk and cause the greatest harms to our society. The purpose of the evaluation is to provide a tool in the hands of the executive power for more efficient planning of the fight against organized crime.

The Deputy Chairman of the National Assembly and Chairman of the Internal Security and Public Order Committee Mr. Anastas Anastasov said that the SOCTA report which evaluates the threat of organized crime in Bulgaria, although the first of its kind, represents a significant step for combating crime. He noted that the analysis of the nature and main characteristics of this phenomenon shows that it is not enough to express readiness to combat crime and to take certain actions with short-term effect. The experience of leading EU partners and the analysis of our own experience show that the strategy for combating crime should be based on thorough knowledge of the opponent and his strengths and weaknesses. "Even more important during the current economic crisis", he noted, "is to focus the resources on countering organised crimes that cause the greatest harms to the state budget and society". No less important is to establish the conditions that would help Bulgaria fulfil its partner responsibilities in contributing to the implementation of the EU model of proactive crime prevention.

Mr. Tihomir Bezlov, Senior Analyst at the Center for the Study of Democracy (CSD) presented the main conclusions of the assessment of the threat of serious and organized crime in Bulgaria. The report aims to show the status of major illicit markets and activities without evaluating the counteraction taken by the law-enforcement authorities. The report is drawn on diverse sources of information – law-enforcement institutions analyses based on intelligence information, statistics and marketing data from surveys, interviews with offenders and police officers. Mr. Bezlov provided a map with the estimated size of markets and criminal activities. He also illustrated the relations between legal, informal and criminal economies. He stated that the revenues of organized crime in Bulgaria amount to about EUR 1.7 billion, which represents 4.7% of GDP. These figures show that the organized crime activities pose a serious threat. The most significant threats outlined in the report were prostitution and trafficking in persons for sexual exploitation, followed by VAT fraud, smuggling of excisable goods (fuel and cigarettes), and narcotics.

Mr. Bezlov outlined two major trends – the fragmentation of big criminal structures and hierarchies that were the defining features of the heroin market, and the reduction in OC related violence. He explained that main harms associated with prostitution are the social harms. On the issue of corruption trends he explained that corruption related to the illegal distribution of drugs has decreased. Finally, Mr. Bezlov stressed that relation between "white collar" and organized crime as the major threat for Bulgaria. Particularly, he highlighted the risks from the corruptive influence of the so called "oligarchs".

The Secretary General of the Interior Mr. Kalin Georgiev focused his presentation on the institutional mechanism for the evaluation of threats, as well as actions taken to tackle organized crime in Bulgaria. He presented in detail the measures taken to counter the main threats identified in the SOCTA report. Mr. Georgiev argued that the security environment today is mainly determined by the inherently asymmetric risks and threats such as terrorism, transnational organized crime, the proliferation of weapons of mass destruction, cyber crime and illegal migration. He noted that since 2009 the Ministry has adopted a new, proactive approach to combating organized crime. He stated that a tipping point in countering organised crime in Bulgaria has been passed. He noted that the large structures in the field of illicit sex services market, which have exercised political influence, have now disappeared, while organized criminal structures are fragmented. In terms of future threats, Mr. Georgiev noted that the MoI is taking measures to increase border security. He highlighted the updated strategy of the border police and the new operational plan to counter migration related crisis situations.

Mr. Alastair Woolley, Regional Manager, Serious and Organized Crime Agency (SOCA), talked about UK’s 10-year experience in applying the threat assessment tool in combating serious and organised crime. He emphasised that the assessment is always the end result of information gathering by national law enforcement bodies, European partners and other sources, and its purpose is to identify the areas that require action, as well as the ‘grey areas’ in the information on organised crime. This enables both SOCA and Home Office to define their priorities. The methodology serves as the basis for more efficient distribution of resources in times of economic crisis, and outlines the trend of threats. Using the threat assessment, law enforcement bodies can react in a timely manner to newly emerging threats.

Mr. Michel Quillé, Deputy Director, Europol, presented the eight priority areas of the European policy for combating organised crime in the period 2011-2013, based on the European Organised Threat Assessment (OCTA) of 2011. In 2013, the first EU Serious and Organised Threat Assessment (SOCTA) will be produced, along with a series of specific operational plans. These steps will mark the beginning of the next period, 2013-2017 in the fight against international serious and organised crime. Mr. Quillé underscored that the only way to tackle this problem is through identification of the threat, and that the contribution of analysts working outside professional organisations is particularly important.

Interior Minister Tsvetan Tsvetanov thanked the Center for the Study of Democracy (CSD) for the preparation of the threat assessment, and noted that this is the first document aiming at the development of a strategy to combat organised crime based on analysis and partnership. As these threats are common for the whole EU, joined efforts are required within the Euro-Atlantic partnership. The minister discussed further the efforts of the government to create an adequate legal framework that would allow the setting of specialised courts, prosecutors and investigation units in the General Directorate for Combating Organised Crime, and the reform in the MoI designed to enhance the effectiveness of investigations. He emphasised the importance of setting up specialised units dealing with serious and organised crime, and the introduction of faster jurisdiction. As a result of political and expert discussions on cybercrime, the number of people in the cybercrime unit has been doubled. Institutional cooperation with the prosecution and the courts concerning the traffic of people has also been improved. The number of effective sentences has increased. These practical measures, and the results they achieved, have restored the confidence of our Euro-Atlantic partners. International cooperation is further strengthened through collaboration of Bulgarian officers with officers from partner states, and in established contacts with Eurojust and Frontex. Regional cooperation is also getting better, with the inclusion of Turkey and the west Balkan countries. Minister Tsvetanov pointed out that the report is yet another evidence of the partnership between the law-enforcement agencies and the non-governmental sector.

Dr. Shentov added that the report is based upon the new European format of threat assessment taking into account also the serious organised crime and with the extensive involvement of expertise outside the MoI. In his concluding remarks Dr. Shentov emphasized on the fact that the restored trust between Bulgaria and its international partners is crucial for the future cooperation and the effective countering of organised crime. 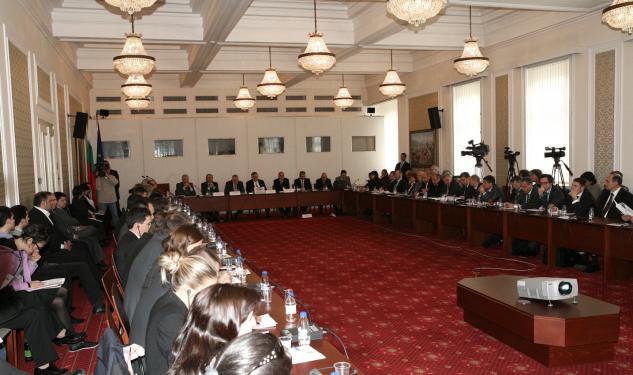 Opening of the discussion