On 28 July 2011 the Center for the Study of Democracy in cooperation with the Southeast Europe Development Initiative and the Bulgarian Ministry of Defense hosted in the Sofia Military Club, a public discussion on national and international security in the 21st century. The keynote speaker was General James Jones, former National Security Advisor to President Obama and Supreme Allied Commander Europe, joined by the Bulgarian Minister of Defense Anu Anguelov. Present at the discussion were high-ranking Bulgarian officials, former and current members of the Bulgarian armed forces, diplomats, members of non-governmental organizations and the media.

Minister Anguelov started the discussion with a short speech about the questions concerning national and international security in the 21st century. He noted that the cooperation between NATO and the EU is an important and necessary factor for the mitigation of the impact of reduced defense budgets. According to minister Anguelov, fast information sharing between the intelligence services in the NATO alliance and the EU, the creation of European funding mechanisms for defense policy, as well as the increasing of the share of mutual financing in NATO, are essential for stronger defense policy.

General Jones began his presentation by complimenting Bulgaria’s role in NATO and emphasizing the importance of US Bulgarian relations. After these opening remarks, General Jones presented his views on national and international security in the 21st century. He noted that in the 21st century threats from non-traditional sources need to be recognized, including; cyber terrorism, links between organized crime and international terrorism, and energy security. These are threats that, according to General Jones, need to be addressed proactively, as opposed to the largely reactive security policies of the 20th century. To this point, he emphasized the need for greater engagement between developed and developing countries based on three components: security, economic opportunity, and increased rule of law and democratic governance. Regarding traditional allies, including the NATO alliance, increased trust and exchanging of information is necessary to become proactive. General Jones noted that to an extent this has happened already, as exhibited by the recent successes in the fight against international terrorism.

Following his more general remarks on security, General Jones presented a review of the first two years of the Obama administration in an international context. He began by noting the issues that president Obama was elected on, including: a restoration of the US image abroad; increasing dialogue and cooperation between nations including Russia, China, India and previously non-engaged nations such as Iran; closing out the US presence in Iraq and closing the Guantanamo Bay detention facility; participation in a new NATO strategy; outreach to the Muslim world including a stimulation of the Middle East peace process; addressing nuclear proliferation; and responding to the previously mentioned new security threats. General Jones continued by highlighting the four key components of the Obama administration’s foreign policy: mutual respect, dialogue, a whole of government approach to national security, and multilateralism. Strategic thinking will become more difficult in foreign policy, according to General Jones, due to the increased pace of international events, and will become more prevalent in the private sector. He continued by addressing the status of the aforementioned goals, noting that the results after two years are better than the media gives the administration credit for. The Middle East peace process was seen as the most disappointing result, while goals such as the withdrawal from Iraq are on target.

Following the presentation, Minister Anguelov and General Jones took questions from the audience. In response to a question on whether the costs of the Iraq and Afghanistan wars were worth it, General Jones noted that it was still too early to tell. When asked about the increase in racism and xenophobia worldwide, and whether it was a threat to national security, General Jones commented on the multicultural character of the US and the continued American commitment to counter bigotry. During the question and answer session he reiterated his earlier point on the need for a government as a whole approach to security issues in response to a question on the continued necessity of military force. Cyber crime was also addressed, specifically the need for a more robust international cyber crime security policy in the face of this emerging threat.

General (ret.) James L. Jones served as Commander, United States European Command and Supreme Allied Commander Europe (SACEUR) from 2003 to 2006. Previously, he was the 32nd Commandant of the Marine Corps from July 1999 to January 2003. Jones retired from active duty in February 2007, after more than 40 years of service. At the request of Congress, Jones chaired the Independent Commission on the Security Forces of Iraq. In November of 2007, General Jones was named Special Envoy for Middle East Security by the Department of State. In January 2009, he assumed the post of National Security Advisor to President Obama and served in that position until November 2010. 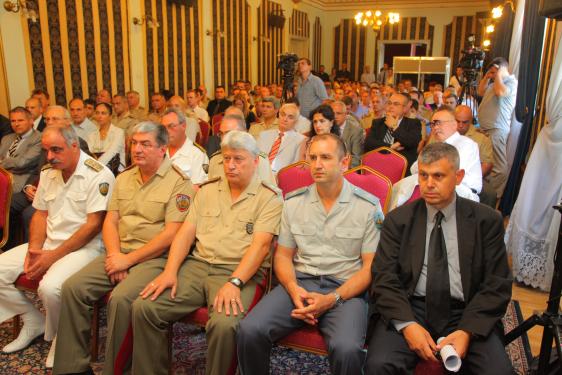 Participants in the public discussion 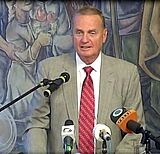 Participants in the public discussion
Related