Public discussion: Judicial Reform and the Execution of Penalties in the Republic of Bulgaria

Public discussion: Judicial Reform and the Execution of Penalties in the Republic of Bulgaria

Ms. Margarita Popova, Minister of Justice of the Republic of Bulgaria, welcomed the participants in the discussion and underlined that the penitentiary system is still not reformed and the reforms in this field so far consist primarily of legislative changes which are not integrated with corresponding reforms in health care, social and educational spheres. She adverted to the need of avoiding the recidivism, of re-socialization and reintegration of the prisoners. Ms. Popova emphasized that the main conclusions and references from the report would become part of the future work of the Ministry on concrete programs (especially for people at risk – drug-addicted persons, who go to prison), for which she would rely also on the support of the Friedrich Ebert Foundation. The reforms in the judicial system, despite of the resistance, coming from retrograde mentality and incomprehension, and regardless the economic crisis, will continue with consistency and while taking into account the experience of the established democracies.

Dr. Maria Yordanova presented the first part of the report, dedicated to the legislation on imprisonment in Bulgaria, the degree of implementation of the European standards and the need for their practical implementation, the conditions and problems of the penitentiary institutions in Bulgaria. She commented on some of the main conclusions, supported by the collected statistical data and empirical research. First, imprisonment is still the most often applied penalty in Bulgaria along with probation, the proportion of which is encouragingly rising during the last three years. Second, there is a high percentage of recidivism – about one half of all imprisoned persons. The other conclusions include: the bad material conditions, overpopulation, the low employment rate, difficulties in ensuring the health care, etc. Among the recommendations in the report are the development of consistent criminal policy for reforming the penitentiary system and the system of penalties, including legislative changes concerning the periods of deprivation of liberty, expanding the implementation of penalties without deprivation of liberty, etc. The report points out a few urgent concrete measures for complying with the European standards. First, it is necessary to finalize the development of the Unified Information System against Crime and to integrate the prisons and detention facilities in it. Second, the possibilities for independent civic control and monitoring of the execution of imprisonment have to be broadened (with corresponding obligations for all relevant state institutions). Last, but not least, the internal control against abuses and violations needs to be strengthened.

Mr. Dimitar Markov, CSD Law Program Senior Analyst, presented the condition and problems of the investigation and punishment of the criminal offenses, related to drugs. He showed statistical data, which prove that in the majority of the cases of drug crimes the courts decree suspended sentences. Moreover, the penalties are rarely more than three years of imprisonment. This proves that the persons going to prison are usually people, who have committed a crime with low level of public danger, who are often drug-addicted and for whom the execution of the penalty places a lot of problems. These problems are related to the lack of adequate treatment, the distribution of drugs among prisoners, etc. The report offers several recommendations for overcoming these problems. First, it is necessary to add probation as an alternative to imprisonment. Second, more programs for substitution therapy in prisons and incentives for voluntary participation in treatment need to be introduced. Third, separate sections for the drug-addicted prisoners have to be created.

Mr. Konstantin Penchev, Ombudsman of the Republic of Bulgaria, emphasized that despite the absence of resources, observance of human rights is a value, which should prevail over everything else. He pointed out the necessity of public control over the Bulgarian institutions and of raising the trust in them. After the upcoming signing by Bulgaria of the Optional Protocol to the Convention against Torture and other Cruel, Inhuman or Degrading Treatment or Punishment, a national preventive mechanism has to be created for the oversight of the places for detention (which include prisons, detention facilities, psychiatric clinics, alcohol rehab centers, etc). The cooperation between the Ombudsman and the non-governmental organizations could contribute to the development of this national preventive mechanism and the exercise of effective public control.

Dr. Maria Karagiozova, Chair of the Regional Court in Gotse Delchev, congratulated the authors of the report for the in depth research of the problem. She outlined the major problems of the prisons – bad material conditions and need for measures for re-socialization of the prisoners, which would protect the society from criminality. She stated that the Law on the Execution of Penalties and Detention, in force since 2009, created a good basis for cooperation between the responsible institutions and non-governmental organizations. Dr. Karagiozova shared the opinion that the judicial control should be expanded to include not only the disciplinary penalties, but also the employment, the additional creative and intellectual activity. She underlined that in the new Criminal Code draft there are changes in the system of penalties consistent with the European standards and the jurisprudence of the ECHR. Among these changes is the abolishment of the life imprisonment without parole.

Prof. Lazar Gruev, Chair of the Supreme Court of Cassation, expressed his support to the publicity the report and the discussion give to the problems of the execution of penalties. He outlined three deceptions related to the criminal law in Bulgaria: criminal law is panacea for everything, increasing the penalties would help for lowering criminality and detention during the investigation is the only effective measure for countering crime. According to him, the problems, related to the conditions in the prisons, would not be solved while both the law and the courts are continuously putting imprisonment in the center of penalties. Prof. Gruev gave examples from Germany, where the proportion between imprisonment and fine (the two major penalties in the German sanctioning system), was in favor of the second. He also argued that probation was a measure for supervision, rather than a punishment.

Mr. Hristo Angelov, Deputy Minister of Justice, explained that the problems of the places for imprisonment were due to the insufficient financing, which hinders the application of European norms for treatment of the prisoners. However he underlined the efforts of the Ministry in this direction. Low employment, according to him, is a reflection of the current situation of the whole labor market and is relared to the overall economic situation and the decreasing demand for low-skilled labor. Mr. Angelov welcomed the proposal for tax relieves for firms, which are hiring prisoners, and promised to discuss the question with the Minister of Finance.

Mr. Plamen Pachev, Prosecutor from the Supreme Prosecutor’s Office of Cassation, quoted the last report of the prosecution service and emphasized the importance of the uniform jurisprudence and the role of the interpretative decisions for the establishment of coherent case law.

Ms. Ivanka Ivanova, Director of the Law Program of the Open Society Institute objected against the two traditional explanations of the problems in the penitentiary system – the lack of money and the national mentality. She underlined that the three former governments have been operating in the condition of budgetary surpluses, but they still have not allocated any funds for the prisons. According to Ms. Ivanova, despite the fact that this government is working in condition of budgetary deficit, its priorities should be reoriented in the direction of attracting investments for the execution of penalties. Moreover, priority should be given to the investigation and effective punishment of the so called “white collar crime” instead of the most often investigated and punished petty crimes, committed by poor, illiterate and marginalized people. Ms. Margarita Popova, Minister of Justice of the Republic of Bulgaria and Dr. Mark Meinardus, Office Bulgaria Director of the Friedrich Ebert Foundation

Mr. Konstantin Penchev, Ombudsman of the Republic of Bulgaria and Ms. Roza Georgieva, Head of the Office of the Ombudsman

Prof. Lazar Gruev, Chair of the Supreme Court of Cassation

Ms. Ivanka Ivanova, Director of the Law Program of the Open Society Institute 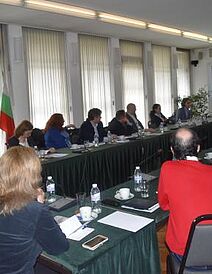 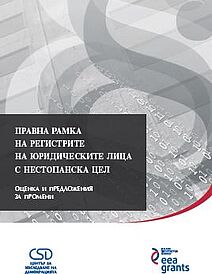 Legal Framework of Registration of Non-Profit Organisations: Assessment and Recommendations for Reform 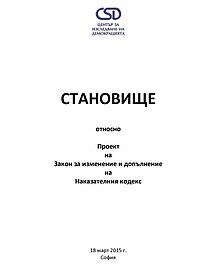 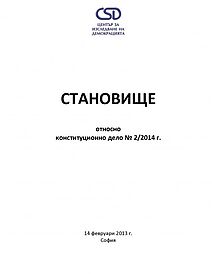 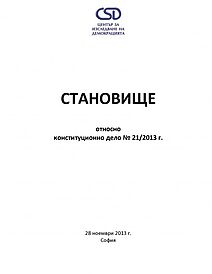 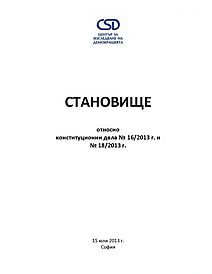 Amendment Proposals linked to the Law for Non-profit Legal Entities