On July 15, 2004Coalition 2000 and the Center for Study of Democracy presented their latest book The Hidden Economy in Bulgaria. It includes contributions from experts of the National Social Security Institute, the Bulgarian National Bank, the National Statistical Institute, the Agency for Economic Analysis and Forecasting and the Center for the Study of Democracy.

According to international estimates the share of the hidden economy worldwide accounts for 10-12% of global GDP. In the transition economies however hidden economy reaches one fourth of GDP. Economic analyses show that if the share of the hidden sector exceeds a critical level (around 50% of GDP) it changes the ‘rules of the game’ in the whole economy.

Mr. Ruslan Stefanov, Project Coordinator, Center for the Study of Democracy, pointed out that the book is valuable for at least three reasons: (1) it estimates the hidden economy using several different methods, (2) it gives a broader view of this phenomenon in Bulgaria for the past four years and assesses specific socio-economic characteristics (labor market, domestic production, tax and social security system, black economy) and (3) it assesses systematically the Government’s efforts to reduce the hidden economy and givers recommendations for further actions in this area.

Mr. Lubomir Dimitrov, Director of Economic Analyses Department, Agency for Economic Analyses and Forecasting, presented the methodology for assessing the hidden economy share in employees’ remuneration. He noted that the phenomenon has two manifestations – hiring employees without contract or reporting lower than the real salary. In the period 2002 – 2004 the share of hidden employment (work without contract) shrank. One of the main reasons for this decrease had been the administrative measures launched by the Ministry of Labor and Social Policy for mandatory registration of all labor contracts and the introduction of minimal social-security thresholds in the beginning of 2003. However, at the same time the share of hidden remuneration (contracts with “hidden clauses”) increased and the majority of the newly registered contracts were primarily at the minimum wage level.

The most common ways to avoid social security payments were described by Ms. Antoaneta Gantcheva from the National Social Security Institute. According to her, there is a large leeway for additional improvement in social security payments’ collection. The main challenge the social security system faces is in changing the people’s attitude towards the present and future benefits from these payments (they should be persuaded that higher contributions now will actually lead to higher pension payments in the future.

Mr. Todor Todorov, Director of National Economic Accounts and Balances Department, National Statistical Institute, highlighted the necessity for better cooperation among the institutions regarding data exchange in order to assess fully the hidden economy and to reveal its true political significance. He welcomed warmly the current publication as it adds significant value to the efforts of the statistical institute to assess the informal economy - due to statistical and economic reasons the National Statistical Institute can not gather relevant information for all economic activities in the country. For example according to its estimates the hidden economy in Bulgaria, which NSI captures is around 16-16.5%. In effect there remain hidden additional 10%-15% of GDP or between 3.4 and 5.2 bln. levs (1.7 – 2.6 bln euro).

Mr. Petkan Iliev, editor of the book and Senior Fellow at the Center for the Study of Democracy pointed out that besides negative influence the hidden economy can also have positive effects. Though these should not be overstated, they are related to the survival of the firms and the population with low income, the generation of additional resources which increase the investment and consumer demand and the decrease of the social price of the transition. The hidden economy also applies pressure for rationalization of administrative services. 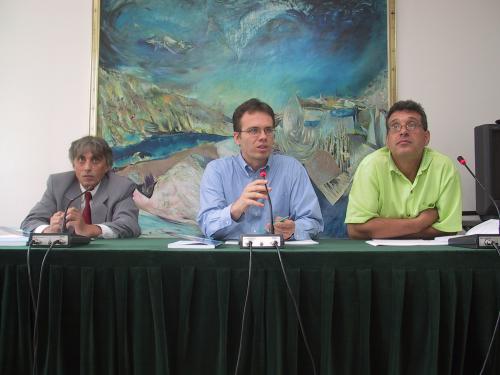 Mr. Petkan Iliev, editor of the book and Senior Fellow at the Center for the Study of Democracy

The Hidden Economy in Bulgaria
Related