On 15 October 2013 the Center for the Study of Democracy held a public discussion to present the results and conclusions of the annual National Crime Survey (NCS 2013).

The discussion was opened by Mr. Chavdar Chervenkov, Director of CSD’s Security Program. He stressed the importance of the victimization survey as an alternative and objective source of information for the state of crime in Bulgaria. It was emphasized that an internationally accepted research method was used, allowing for comparison of data across countries, unlike the statistical information collected by Eurostat.

Mr. Tihomir Bezlov, Senior Analyst at the CSD, presented the results and conclusions of NCS 2013. It was noted that for the first time there has been a discrepancy in the trends, outlined in the survey, and the police statistics. NCS 2013 marks a trend in increasing crime, while the official statistics shows a downward trend. One of the possible reasons is that the victimization survey was held in January – February 2013 in a period of considerable political instability and enhanced public sensitivity towards crime. The difference in the quantity indicators can once again be explained with the considerable level of non-reported crime and the existence of police filters.
This year the survey has been conducted through two parallel methods: face-to-face interviews and for the first time, telephone interviews (CATI). With the use of telephone interviews the survey has become more representative and has shown even higher levels of crime.

Mr. Philip Gounev, Senior Analyst at the Center for the Study of Democracy, focused on one of the topical issues - the connection between immigration and crime. By comparing the experience of several Western European states, he underlined that the immigration flows do not coincide with the ones of organized crime. It is a fact that in the areas with massive presence of newly-arrived immigrants/asylum-seekers an increase of the level of crime is noted, but in these cases it is mainly crime, related to subsistence – petty stealing, theft of food and other subsistence means. Subsequently, however, in the absence of effective social integration policy and actions, there is a risk of an emergence of organized criminal groups and infiltration in the informal economy.

During the discussion Ms. Antoaneta Apostolova, Mayor of the municipality of Slatina, posed two questions: (1) whether the NCS takes into account the effect of released prisoners on the rise of crime levels and (2) what are the methods for analysis and control of the quality of police officials’ work. In this regard, Philip Gounev noted that the issue of people, released from prison, has been analyzed in a previous report of the Center and that the introduction of new control instruments would contribute to the improvement of the performance of the Ministry of Interior employees, including the use of “mystery clients”. Equally important is the appointment of sufficient number of officers in the control bodies of the Ministry of Interior, as well as the introduction of electronic systems for reporting crime.

Mr. Ivo Nikodimov, Bulgarian National Television, mentioned that successful investigations by the Ministry of Interior is often not followed by effective work of the prosecution. He expressed concern that the massive termination of investigations to a great extent demotivates police officers and that the prosecution turns into a second-level filter in crime registration.

In his closing remarks, Mr. Chervenkov once again stressed the need for an increase of the public confidence in police and expressed his hope that the new Law on the Ministry of Interior would contribute to that. 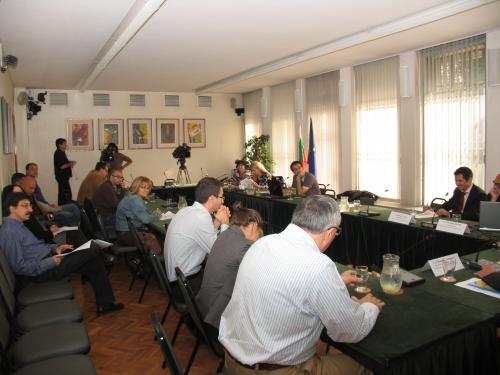 Ms. Antoaneta Apostolova, mayor of the municipality of Slatina
Related