Public Discussion: Countering Organized Crime in Bulgaria: a Study on the Legal Framework

Public Discussion: Countering Organized Crime in Bulgaria: a Study on the Legal Framework

On 30 March 2012 the Center for the Study of Democracy organized a public discussion on the report Countering Organized Crime in Bulgaria: a Study on the Legal Framework. Representatives of the judiciary, the Ministry of Justice, experts, academics and attorneys took part in the discussion.

In her opening remarks Dr. Maria Yordanova, Director of the Law Program of the Center for the Study of Democracy, emphasized the broad framework of the organized crime topic and the different approaches towards it and acknowledged the contribution of all representatives of state institutions (court, Prosecutor’s Office, Ministry of Interior) and the bar, who took part in the research.

Mr. Dimitar Markov, Senior Analyst at the Law Program of the Center for the Study of Democracy, reviewed the substantive legal framework of criminalizing the acts of organized criminal groups (OCGs) in Bulgarian Criminal Code. He outlined the problems, posed by the legal definition of OCG, as well as the consequences they may have, as regards its scope and the jurisdiction of OCG-related cases. OCGs were differentiated from the classic forms of complicity, from the conspiracy and criminal association, as well as from other types of criminal groups, the tendencies being for those concepts to be confused or applied simultaneously with certain problems. The acts of creating, leading and participating in OCGs, as well as the related aggravating circumstances, were described, together with the criminal sanctions, imposed for those.

Dr. Maria Yordanova analyzed the procedural framework for gathering evidence, concerning OCGs. She reviewed the key criminal procedure norms, other relevant legislative instruments, as well as the problems in their implementation, which had an impact on the effectiveness of pre-trial and trial proceedings in OCG-related cases. Special attention was given to the issues of protecting witnesses, interviewing anonymous witnesses, as well as the evidentiary value of data, acquired through special intelligence means (SIM). A number of recommendations were given, as regards the operative means, used as SIM, as well as the supervision over their use. Among the other procedural tools, applicable in investigating and prosecuting OCGs, remand measures, summary trial investigation and plea bargaining were pointed to. Special emphasis was put on the challenges before the newly created specialized criminal courts and prosecutor’s offices.

In the ensuing discussion Ms. Pavlina Panova from the Supreme Cassation Court recommended that the report of the Center for the Study of Democracy reaches the widest possible professional audience. Regarding the financial sanctions of OCG members, Ms. Panova noted that those are rarely imposed and hardly enforced, because competent authorities do not make timely motions for their securing and do not identify what property the accused and defendants possess. In relation to testimony by protected witnesses, it is the role of the court to assess whether to keep their protected status, since in many cases they are related to the criminal activity and their identity is well known to the parties. As for the prohibition for charges or convictions to be based solely on testimony of witnesses of secret identity or SIMs, Justice Panova outlined the risks, which the recent Constitutional Court judgement created, leaving the issue to the internal conviction of each magistrate. As regards the number and reporting of SIMs, she dwelled upon the threat of infringing upon the presumption of innocence, as well as raising unjustified expectations, created by the public statements of members of the executive. Plea bargaining and summary trial investigation were said to indeed save time and resources. However, they were also blamed for generating Prosecutor’s Office’s wrongful practice to seize the Supreme Cassation Court with requests for reopening criminal cases due to apparently unfair sanctions, although prosecutors had taken part in the plea bargaining at lower instances. Justice Panova also presented briefly the Supreme Cassation Court’s recent analysis on OCG-related cases, published on its website.

Ms. Ivanka Ivanova, Program Director of the Legal Program of the Open Society Institute - Sofia, expressed her opinion that the most effective tool for countering organized crime is not the prosecution of OCG members, creating tensions between police and the courts, but the improvement of the sanctioning of money laundering, the related criminalization of trade in votes and the transparency of political party financing. Ms. Ivanova was positive that law making should be placed on professional bases, including preliminary impact assessment and public discussions.

Judge Plamen Datzov from the Sofia Appellate Court criticized the quality of criminal law making in Bulgaria, the fragmentariness of the Bulgarian Criminal Code and the problematic definition of OCGs, as well as the law makers’ unwillingness to consult practitioners when preparing drafts of laws. Judge Datsov also described the current tendency for all norms, related to countering organized crime, to be separated from countries’ Criminal Codes and included in special laws, enabling states to adapt them to the dynamics of criminality without touching upon the complicated systems of Codes.

Mr. Dinko Kanchev, attorney-at-law, emphasized the role of prevention in countering all types of crime and the importance of designing a general state policy in the criminal justice sphere. He reminded the audience that the adoption of the Bulgarian Criminal Procedure Code of 1974 was preceded by twenty years of research and consultations among academics and practitioners. Mr. Kanchev also pointed out that many of the inconsistencies in legislation were rooted into amendments, made out of political considerations.

Mr. Roumen Kirov, investigating magistrate from the National Investigation Service, agreed that legislation was often made under public pressure and criticized the phrasing of Criminal Code norms, regarding OCGs.

Mr. Tihomir Bezlov, Senior Analyst at the European Program of the Center for the Study of Democracy, Ms. Rada Yossifova, attorney-at-law, member of the Sofia Bar Association, Mr. Dragomir Yordanov, Director of the National Institute of Justice, also took part in the discussion. 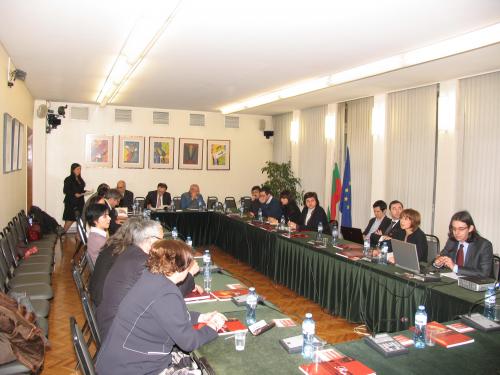 Mr. Dimitar Markov, Senior Analyst at the Law Program, Center for the Study of Democracy