On 16 October 2018 the Center for the Study of Democracy held a roundtable, dedicated to European standards and new Bulgarian experiences in the effective referral, support and protection of the rights of victims of trafficking. The event gathered representatives of the executive and the judiciary, such as the National Commission for Combatting Trafficking in Human Beings, the National Legal Aid Bureau, the State Agency for Refugees, the Migration Directorate with the Ministry of the Interior, the State Agency for Child Protection, the Employment Agency, the Sofia Regional Court; UNICEF as well as NGOs from the Alliance for Protection against Gender-Based Violence.

In his opening remarks, Mr Dimitar Markov, Project Director at the Law Program of the Center, cited findings from a recent CSD publication according to which the human trafficking phenomenon is growing, while new technologies provide traffickers with easier control over victims.

In his presentation, Mr Stefan Ralchev, Chief Expert at the Administration of the National Commission for Combatting Trafficking in Human Beings, presented the co-ordination mechanisms, which the Commission applies in its work, and especially the National Referral Mechanism, oriented towards the rights of victims. Among the achievements of the Commission in the last two years, Mr Ralchev emphasized on the opening of two new services for victims – a shelter and a crisis center for children. As a concrete example for successful co-operation between Bulgarian and EU authorities, the Commission representative described a case from Toulouse, France where an organised criminal group exploited Bulgarians for begging. As a result of the swift actions by authorities, 23 Bulgarians returned to the country. Ms Miriana Ilcheva, Senior Analyst at the Law Program of the Center, gave details on the international initiative which the roundtable was closing, emphasizing on the support of the National Commission for Combatting Trafficking in Human Beings, a number of NGOs and magistrates. As part of the initiative, experts had visited several countries with substantial achievements in the prevention and countering of trafficking, such as Sweden, Spain and Belgium. A handbook for professionals working with victims was drafted and presented at a training, main topics including EU and national legal frameworks, secondary victimisation, support by psychologists and social workers, as well as interinstitutional co-operation in cases of trafficking. Several issues were put out for discussion – how victim support should reach all the country’s regions, how to integrate all support services into a one-stop-shop, how to take care of the families of trafficking victims, how to implement counter-trafficking and migration management together.

Ms Petya Dobreva, Director of Legal Aid Directorate of the National Legal Aid Bureau, outlined the main directions in the work of the institution – facilitating the access of persons and improving the effectiveness and quality of legal aid. Besides the creation of the national legal aid telephone line and regional consulting centres, the vital importance of the co-ordination between the Bureau and social support directorates and the support and information by NGOs was emphasized. Ms Miriana Ilcheva from the Law Program of the Center presented a strategic paper for referral to legal aid of victims of trafficking, developed within the framework of the initiative. She outlined the key role of the independence and loyalty of lawyers in defending victims’ interests. The need for constant improvement of lawyers’ expertise and the accompanying disciplinary liability in cases of violations were also outlined.

In the panel dedicated to the experiences of the NGO sector, Ms Daniela Gorbounova, attorney-at-law, Bulgarian Gender Research Foundation, presented cases from her practice, commenting on the specifics of the legal protection of victims of violence and the need for profound knowledge on the psychological impact of the crime. Ms Gorbounova pointed to the role and contribution of NGOs in the sphere and noted that trials usually take a long time during which the support of relatives and experts is vital for the victim.

Ms Tania Tisheva from the Alliance for Protection against Gender-Based Violence presented the activities of the Alliance and member organisations throughout the country. The Alliance’s main aim is to support and co-operate with national and local authorities in cases of violence and lobby for legislative amendments in relevant areas. Ms Tisheva gave examples of successful projects in the fields of protection against violence and human trafficking.

In the ensuing discussion Ms Diana Videva from the Demetra Association recommended the creation of one stop shops – integrated centres where victims of trafficking may benefit from an array of services. There is also necessity for effective co-operation among lawyers, social workers and psychologists which would be a pre-requisite for successful victim support. Ms Antonia Seizova from UNICEF posed questions on the Swedish experience with children victims of migrant origin as well as on the avenues for seeking sustainability of the initiative’s activities. Mr Dimitar Markov commented that there was lack of capacity among institutions dealing with migration which prevented them from identifying incoming trafficking victims. Other important factors cited were the language barrier and the non-differentiated approach of institutions. Answering to those findings, Mr Nikolai Cholakov and Ms Katina Andreeva from the State Agency for Refugees pointed out the substantial progress in overcoming language barriers and the improvement of the Agency’s institutional capacity to counter trafficking. Ms Gorbounova joined the discussion by giving examples from the European Court of Human Rights case-law on ineffective investigations of sexual violence cases in Bulgaria. 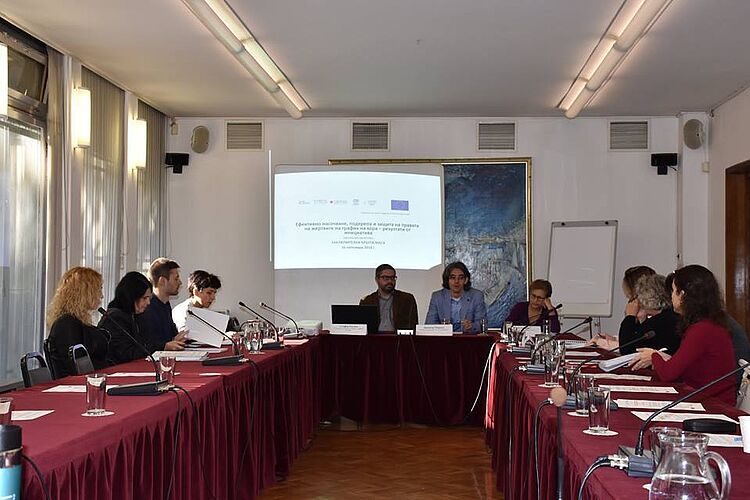 During the roundtable 'Protection of the Rights of Victims of Trafficking – European Standards and New Bulgarian experiences', 16 October 2018, Sofia

(L-R): Mr Stefan Ralchev, Chief Expert at the Administration of the National Commission for Combatting Trafficking in Human Beings, Mr Dimitar Markov, Project Director at the Law Program of the Center for the Study of Democracy

During the round table 'Protection of the Rights of Victims of Trafficking – European Standards and New Bulgarian experiences', 16 October 2018, Sofia