Although Russia's economic presence in Europe has been declining in last two years, Bulgaria alongside with Serbia are the countries most inclined to safeguard and showcase pro-Russian disinformation and propaganda narratives and sentiments in Southeastern Europe. They serve as key hubs of economic, political and informational influence for the Kremlin and a base of operations for its geopolitical ambitions in the region. The Kremlin economic and political influence in Bulgaria correlates with the growing anti-Western and anti-democratic propaganda in the social and mainstream media, pointed out Dr. Todor Galev, Director of Research at the Center for the Study of Democracy at the press conference "Pro-Russian disinformation and the Kremlin's anti-democratic messages in Bulgaria in the context of information war", co-organized with the Association of European Journalists - Bulgaria and Factcheck.bg.

A significant part of the pro-Kremlin disinformation is produced, disseminated and supported by local media or political and economic entities that serve as intermediaries or amplifiers of the Kremlin's information influence, Mr Galev added. To achieve its foreign policy objectives, the Kremlin applies the tools of state capture, including media capture, in Bulgaria, exploiting and reinforcing existing governance deficits. Gaining influence through the dissemination of anti-Western and anti-democratic disinformation by utilizing its economic and political ties in the media sector is a much-preferred tactic used by the Kremlin to increase its foreign influence. Among the reasons facilitating the penetration of disinformation in Bulgaria, which the Russian government reinforces with its actions, are ineffective regulatory and control institutions, hidden or illicit funding of media and "agents of influence", declining levels of media freedom, disinterest of technological platforms and European institutions, low media literacy, low journalistic standards, widespread support for conspiracy theories among the population, and last but not least, the use of social media as а main source of news.

Due to its high susceptibility to anti-democratic disinformation narratives, Bulgaria should prioritize developing a long-term strategy, supported by legal and financial instruments to increase media literacy among the population. Furthermore, depoliticizing and enhancing the capacity of state institutions in the field of national security to identify and analyze illegitimate foreign economic, political and informational influence in a timely manner is a much-needed step in order to tackle pro-Kremlin, anti-EU and anti-NATO propaganda.

Asoc. Prof. Ralitsa Kovacheva, editor-in-chief of Factcheck.bg, added that this is a deep and structural problem we have in the Bulgarian media environment, which makes the work of detecting misinformation even more difficult. It concerns the deliberate and purposeful dissemination of false or misleading information, as well as the amplification of the Kremlin narratives. In addition, there is “a low-quality environment”, made up of a huge number of copy-paste websites, in which it is impossible to catch the trail of where something is coming from and where it is being spread.

"Russian disinformation relies on multiple narratives, sometimes contradictory, in order to create an ecosystem that is a suitable breeding ground for disinformation", said Ivan Radev from the Association of European Journalists - Bulgaria. This goal is also achieved through an attack on the media, he added.

"In practice, misinformation throws down the gauntlet very seriously to the work of journalism and to the understanding of journalism today. We have to be aware of what is happening inside the media itself. A lot of people are trying to tell us that it is all propaganda, that it is just a struggle between different interpretations. This, in effect, makes the work of journalists meaningless. This is how political leaders or foreign countries can destroy the democratic basis of society, because if we give up the role of journalists and admit that everything is just a matter of opinions, then this will be the end of journalism", added Irina Nedeva from the Association of European Journalists - Bulgaria.

Video available on the BTA web-site 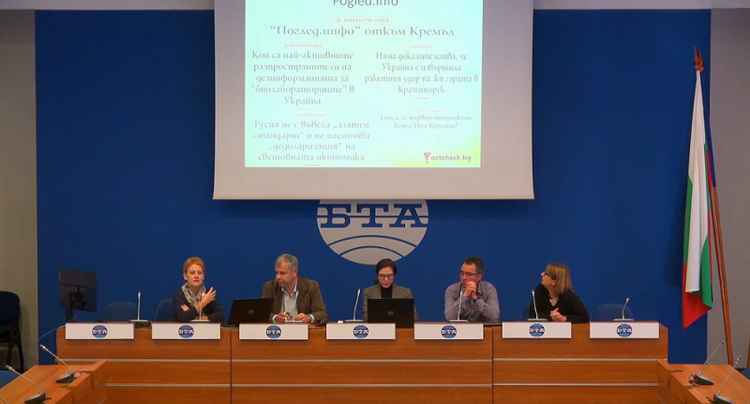