Privatization of Security in Transforming Societies

Privatization of Security in Transforming Societies

The flourishing private security sector in Southeast Europe has received little attention in international and domestic policy debates on security governance despite the growing challenges and opportunities it presents to ensuring security as a public good in new democracies. The private security industry in the region has arisen relatively rapidly over a short period of time, filling the gap created by the downsizing and decentralisation of state security structures and privatisation of state owned enterprises. Although the private security workforce across the region approaches quickly or even outnumbers the police forces by several times as in the case of Bulgaria, market developments have not always been accompanied by a functioning democratic governance and oversight system, creating a plethora of risk for human rights and the democratic order.

The challenges and opportunities associated with privatization of security in transforming societies was the topic of a panel discussion at the 5th Belgrade Security Forum held between 30 September and 2 October 2015.

On 1 October 2015, Ms. Rositsa Dzhekova, Coordinator of the Security Program of the Center for the Study of Democracy in cooperation with Geneva Centre for the Democratic Control and Armed Forces (DCAF) took part in the panel discussion and presented key findings of the book A Force for Good: Mapping the private security landscape in Southeast Europe. The study is the first of several forthcoming outputs from the joint initiative Private Security Research Collaboration Southeast Europe (PSRC), a DCAF-led partnership between CSD, the Belgrade Centre for Security Policies (BCSP), the Institute for Democracy and Mediation (IDM) in Albania, and the Kosovo Center for Security Studies (KCSS).

The discussion was attended by high-ranking current and former international and local security experts from the public and private sector, academics and journalists. The panellists discussed the following key issues:

The panel moderator, Mr. Alan Bryden, Assistant Director and Head of the Public-Private Partnerships Division, Geneva Centre for the Democratic Control and Armed Forces (DCAF), opened the discussion by putting forward some of the most pertinent issues and challenges in the field of private security governance. He emphasised that the number of private security companies (PSCs) is growing steadily in many states in SEE and some PSCs have taken over tasks previously performed by state security forces. While most countries do have laws that regulate the activities of PSCs, Mr. Bryden stated, there is a need for a more comprehensive discussion on the role PSCs ought to have in national security structures and what their involvement in ensuring national and human security should be like. He introduced the book A Force for Good: Mapping the private security landscape in Southeast Europe as a valuable collaborative effort that sheds light onto how PSCs operate, how governments and legislators can ensure that PSCs help increase security and how it can be guaranteed that safety needs do not become secondary to commercial considerations.

In presenting the key findings from the report Ms. Rositsa Dzhekova highlighted some key cross-cutting issues that were found to play a significant role in shaping the private security environment in all researched markets. The states share a common post-transition legacy and some have had to deal with the consequences of war. This meant that the private security sector developed rapidly against the backdrop of legal vacuum, weakened state security services and growing security concerns, while regulation has been slow to catch up. Therefore, a major regulatory challenge for the private security market has been the delicate balance of providing conditions for competitive and liberal market environment while addressing pressing issues of public security and safety. Despite some positive developments – e.g. the passing of sector-specific legislation in all researched contexts – many areas for improvement have been identified, including deficiencies in the practical implementation of regulations and licensing regimes, a large grey sector and exploitative labor practices, as well as the lack of security-related standards in public procurement. Ms. Dzhekova highlighted the ambiguous arrangement of public-private partnerships between the state and private security actors in matters of complex and strategic security issues as a persistent challenge in the sector. The system of protecting strategic infrastructure Bulgaria is a case in point. Ms. Dzhekova also stressed the importance of control and oversight of the private security market, particularly in jurisdictions where state resources for monitoring are allocated incommensurately to the size of the market and where an oversight framework has not been envisioned by the legislator.

Ms. Natasa Ignjatovic spoke on behalf of the Serbian Ministry of the Interior as a Superintendent of the Department for monitoring and oversight of private security and detectives in Police Department and Head Police Advisor. She introduced the new national regulatory framework to be implemented in Serbia by 2017. Ms. Ignjatovic illuminated some of the more specific developments within the newly passed legislation, such as extensive training requirements for guards, and highlighted the importance of having a comprehensive law regulating the private security sector, which is unprecedented for Serbia.

Mr. Branimir Bekic, Security Director/CSO, Vojvodjanska banka member of NBG group emphasized the importance of state regulations in the private security sector as a facilitator and guarantor of the efficient functioning of the business both in terms of free market and effective and orderly provision of security and guarding services to businesses, facilities and individuals. He also stated that the effective communication and cooperation between state and private actors is essential in security matters of national importance and priority, such as organized crime and financial crime. 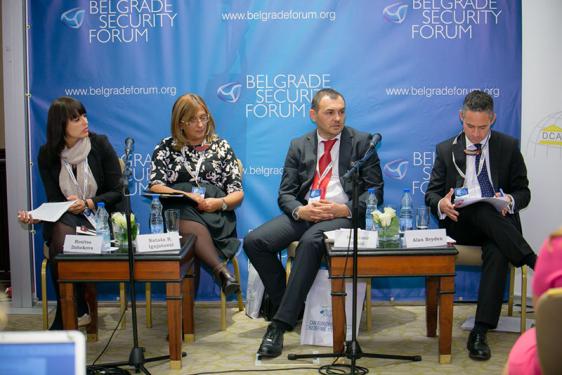 Participants in the panel discussion

Ms. Rositsa Dzhekova, Coordinator of the Security Program of the Center for the Study of Democracy

Natasa Ignjatovic, Superintendent of the Department for monitoring and oversight of private security and detectives in Police Department and Head Police Advisor at the Serbian Ministry of the Interior

Rositsa Dzhekova, Coordinator of the Security Program of the Center for the Study of Democracy