Bulgaria and Europe have reached an energy crossroads. To meet the European Energy Union’s ambitious goal of reducing greenhouse gas emission in the electricity sector by over 90% until 2050, they should transform their energy systems, taking into account the inevitable socio-economic implications. Within this strategic framework, Bulgaria should clearly state its objectives and outline its key policies and the topics for public debate needed to achieve them. These were some of the conclusions of the policy round table Priorities for the Bulgarian Energy Sector until 2050: European Perspectives and Strategic Vulnerabilities organised by the Center of the Study of Democracy on 31 October 2017.

The CSD Chairman Dr. Ognian Shentov and the Director of Konrad Adenauer Foundation’s Bulgaria Office Mr. Thorsten Geissler opened the round table. They outlined the main energy security risks for Bulgaria within the European Energy Union’s framework. Dr. Shentov pointed out that Bulgarian public bodies continue taking long-term energy decisions (such as the construction of a new large nuclear power facility) without any effective energy policy planning mechanism based on a cost-benefit analysis. Mr. Geissler spoke of the energy priorities of Europe and Germany: secure energy, energy efficiency, decarbonisation of the electricity sector based on renewable energy resources (RES), and the phasing out of nuclear power.

Martin Vladimirov, Analyst at CSD’s Economic Program, presented three scenarios for complete decarbonisation of the electricity sector by 2050 based on data and modelling used by the European Commission. The results of the modelling work on Bulgaria show that under the scenario with an ambitious decarbonisation target and corresponding support schemes for renewable energy sources, the country would have an electricity mix with 53-54% renewable generation, mostly solar and wind, and some hydro-power by 2050. By then, due to the rising electricity prices resulting from more expensive carbon emissions and natural gas prices, more than two thirds of the needed investments in new RES capacity will be private market-based, rather than state subsidised investment. State support for RES technologies will be funded through the sale of carbon emission quotas, rather than power price based subsidising mechanisms. As per the scenarios, coal based generation capacities are expected to be priced out of the market by 2040, while a new nuclear capacity would not be financially viable and justified.

The main findings of the scenarios were discussed by a panel of speakers including Dr. Ivan Ivanov, Chairman of the Bulgarian Energy and Water Regulatory Commission, Delyan Dobrev, Chair of the Parliamentary Energy Committee. Dr. Ivanov underscored that Bulgaria would not need new large-scale generation capacities at least until 2035. He added that in the long term, the country would have to meet the EU goals, among which is the closing down of the large coal burning plants in the Maritsa basin. He noted that the promotion of new RES capacities will be completely funded through greenhouse gas quota sales, while preferential feed-in tarrifs will remain only for roof solar panels and passive solar buildings. Ivanov’s forecast was more optimistic than the scenarios presented, including a more gradual electricity price increase due to dropping consumption, rising energy efficiency and the demographic crisis leading to lower electricity demand across the country.

Delyan Dobrev focused on the need of greater investment in energy efficiency. He quoted data from the ongoing national scheme for multi-story building renovation showing power savings of close to 1 TWh to date, which is equal to the power produced by a generating capacity of 140 MWh. Dobrev emphasised the role of natural gas in Bulgaria’s energy system, noting that the possible discovery of sizable gas deposits in the Black Sea shelf would alter significantly the decarbonisation scenarios. In this case, he stressed natural gas would have a much larger share in the country’s electricity mix, its lower price making gas power plants more competitive in a liberalised power market.

In the discussions that followed, Mr. Martin Dimitrov, Chair of the Parliamentary Committee on Economic Policy, Energy and Tourism (2009–2013), and Mr. Traicho Traikov, Minister of Energy and Tourism (2009–2012), supported the view that Bulgaria should first of all adopt a transparent, data-based decision-making framework based on detailed scenarios before embracing expensive large-scale projects such as the Belene nuclear power plant, the latter project being, according to Traikov, a severe problem, rather than a solution for the country’s energy security. Mr. Ivan Hinovski of the Bulgarian Energy Forum and Mr. Petko Kovachev of the Green Policy Institute were also more positive on the use of natural gas and RES respectively, as factors that could change the presented scenarios to an earlier pricing out of the market of coal-fired power plants. 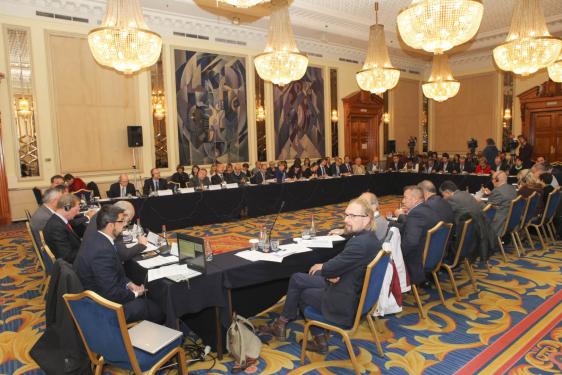 The Participants during the Policy Round Table 'Priorities for the Bulgarian Energy Sector until 2050: European Perspectives and Strategic Vulnerabilities', Sofia, 31 October 2017

The Media during the Policy Round Table 'Priorities for the Bulgarian Energy Sector until 2050: European Perspectives and Strategic Vulnerabilities', Sofia, 31 October 2017

Policy Brief No. 70: A Roadmap for the Development of the Bulgarian Electricity Sector within the EU Until 2050
Related