On 27 October 2011 the Center for the Study of Democracy presented its latest publication "The Hidden Economy in Bulgaria and the Global Economic Crisis", published with the support of the Friedrich Ebert Foundation, Sofia.

Mr. Ruslan Stefanov, Director of the Economic Program at the Center for the Study of Democracy, presented the main findings of the report. According to the authors of the publication, the core causes of hidden economy in Bulgaria are the tax and social security burden, regulations, restrictions of and requirements for market access, as well as the quality of the public institutions in the country. The ineffectiveness and inefficiency of the latter, reinforced by the lack of constructive dialogue between the public and private sectors, are identified as the primary prerequisites for the growth of the hidden economy. Its levels are currently estimated to be in the range between 20% and 30% of GDP. Construction, retail and tourism are among the industries with highest level of hidden economic activities in Bulgaria. A sector as vital as healthcare, appears to have high level of unreported economic activity, which only comes to consolidate the notion of a troubled Bulgarian healthcare.

The analysis of the Center for the Study of Democracy of over 300 measures, adopted by the public authorities for countering the hidden economy, revealed that the majority of them are punitive in nature. In the meantime, the proposed economic and administrative measures are not coherent. Ignoring the existence of a considerable share of hidden economy, while developing public policies, leads to chronic under-financing for all public areas - security, healthcare, education, etc.

Mr. Andrey Nonchev, Director of the Sociological Program at the Center for the Study of Democracy, highlighted the limited role and influence of adopted public policies on the hidden economy. They cease to be discussed publicly after their implementation. No assessment is done on their results and level of consistency with the declared objectives. The public debate on the development, implementation and most importantly, on the assessment of public policies remains very limited. So much so that it can be argued that Bulgaria has lost the public character of its policies. 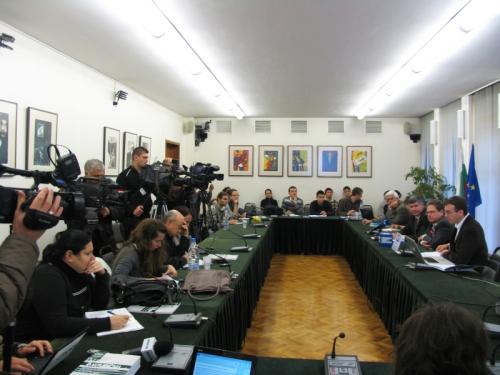 The participants at the pressconference