Press-Conference: Corruption and Anti-Corruption in Bulgaria (2011-2012)

Press-Conference: Corruption and Anti-Corruption in Bulgaria (2011-2012)

On 24 September 2012 the Center for the Study of Democracy and Friedrich Ebert Foundation organized a press-conference to present the latest data from the Corruption Monitoring System (CMS).

Ms. Regine Schubert, Director of Friedrich Ebert Foundation for Bulgaria, thanked the Center for the Study of Democracy and the team that prepared and collected the latest CMS data and policy brief . She underlined the importance of the corruption issue and noted that in its latest report the European Commission clearly states that there is a necessity for demonstrating better results in countering corruption in Bulgaria. Dr. Pentcho Houbcthev, Project Coordinator at the Friedrich Ebert Foundation for Bulgaria, indicated that along with the problems with the rule of law in the country, corruption is the other of the two significant deficiencies of Bulgarian democracy. In addition, he noted that despite the existence of various anti-corruption measures and special state control commissions, the Bulgarian government is still failing to achieve any sustainable anti-corruption results.

Mr. Alexander Stoyanov, Director of Research at CSD, presented the data from the Corruption Monitoring System. He noted that the publication includes retrospective analysis on the monitoring of corruption for the period 1998 - 2012. According to Mr. Stoyanov, the main conclusion is that although there is a downward trend observed during the analyzed period, the corruption level in Bulgaria remains considerably high, with a monthly average of 150,000 corruption deals in 2012. Data also shows that throughout the years, different Bulgarian governments did not manage to build a systematic corruption counteraction, as anti-corruption measures have been usually politicized and strongly affected from the respective political environment. According to Mr. Stoyanov, State administration remains the main source of corruption while the resistance from the population diminishes. Moreover, political hires in state administration hinder the effective investigation of corruption.

Mr. Ruslan Stefanov, Director of the Economic Program at CSD, noted that in 2012, the CMS registered the lowest levels of business corruption in its entire history. In practice, however, the most significant reduction in corruption pressure on the business and respectively – in corrupt practices, occurred in 2007 when Bulgaria entered the European Union. According to Mr. Stefanov, this comes to show that successful results can be achieved only when radical changes and reforms are implemented, as was the case with the customs reforms from 2007. Mr. Stefanov noted that the European Union is strengthening the focus on monitoring and combating corruption. As of 2013, the European Commission will start publishing a regular corruption monitoring report at EU-27 level.

Mr. Philip Gounev, Senior Analyst at CSD’s European Program, made a review of the possible anti-corruption measures. He identified two main priority areas in countering corruption. Firstly, there is need of undertaking an administrative reform, which would serve as a basis for the creation of professional State administration, better guarded against political pressure and with management that does no change every four years. Secondly, there is need of solidifying the investigation function of the Bulgarian State authorities – an area in which Bulgaria has very low capacity. There is also lack of effective mechanisms foreseen for the development of such investigative authorities. 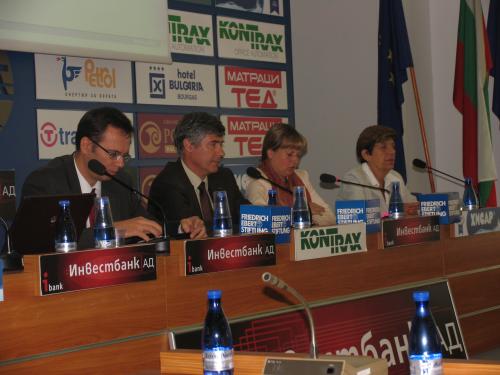