Since 2014 the countries of the European Union face intensified inflows of asylum seekers with the number of asylum claims coming up to nearly 1,4 million in 2015, over 1,2 million in 2016 and above 500 000 between January and October 2017. The considerable inflow of forced migrants coming predominantly from Syria, Afghanistan and Iraq called for reconsideration of the structures and functionalities of the Common European Asylum System (CEAS) and for expansion and improvement of the reception and integration systems across all member states.

The provision of relevant information and orientation becomes key component in the process of reception and integration of beneficiaries of international protection. This was the topic put at the centre of the training seminar “Facilitating the Integration of Beneficiaries of International Protection by Provision of Orientation and Information”, organized by the Centre for the Study of Democracy in Sofia between 29 November and 1 December 2017.

The seminar gathered professionals in the refugee reception and support field from Bulgaria, Greece, Italy, Malta and Spain who discussed possibilities to transfer, adapt or invent approaches and tools in the provision of orientation and information support to beneficiaries of international protection. The training was provided by professionals from Italy and Spain working at refugee support organisations with a mandate to implement government run reception and integration programs in the two countries.

Valentina Fabbri and Sebastiana Masuri from the Italian Cooperative Programma INTEGRA conducted two training sessions the one dealing with practical overview of the methods and mechanisms for integration of refugees in Italy and the other with the design and implementation of practical tools for job orientation. The sessions were built along the discussion of case studies and the roles and functions of the assistance teams working with them.

Karina Zubiaga and Susanna Nicolas from the Catalan Commission for Assistance of Refugees (CCAR) conducted two more training sessions. The first one provided practical information on the three-stage Spanish program for reception and integration of refugees which involves tools for support of up to 18 months per beneficiary. The second session presented concrete action tools conceptualized around group work to support refugees in the process of language acquisition, job orientation and overall adjustment and adaptation to the Spanish society.

In the last day, December 1st, participants from Bulgaria, Greece and Malta presented concepts for the development of training modules to facilitate the orientation and integration of beneficiaries of international protection in each of the three countries. The concepts were presented respectively by Rosa Vasilaki from ELIAMEP and Dilara Demir from MELISSA Network in Greece, Mila Mancheva from CSD in Bulgaria and Marcella Pisotti from People for Change Foundation in Malta. In the discussion that followed participants agreed that the modules should be directed at social workers so as to aid their work with beneficiaries of international protection and thus support the enhancement of the assistance and integration systems in the three member states. Some of the main topics to be included in the mdules stressed by the presenter included: cultural orientation, civic education, job orientation, women’s rights, health and the role of women in European societies, access to justice and basic services including inter-cultural competences. 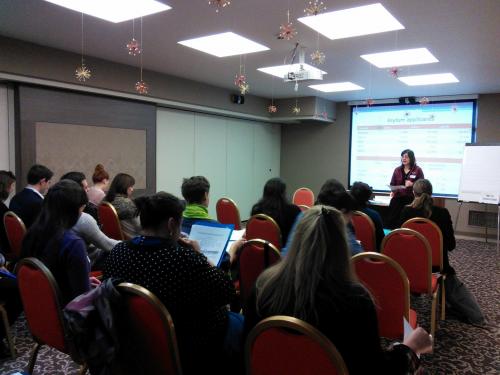 During the presentation by Dr. Mila Mancheva

During the presentation by Sebastiana Masuri

During the presentation by Valentina Fabbri