On 24 February 2015, CSD organized in Brussels a policy forum addressing the main obstacles before the creation of the EU Energy Union, focusing in particular on governance implications for Southeastern Europe in the context of the sizable shifts in the national energy policy of individual member States and amid rising tensions with Russia. The event served as a platform for discussion of the future options for energy market integration in Southeast Europe, the challenges of local bad governance, and the obstacles before a regional energy strategy.

Mr. Vladimir Urutchev, MEP, Committee on Industry, Research and Energy, opened the discussion by saying that the EU has significantly advanced its common energy policy since 2007. According to Mr. Urutchev, the key ingredient in the renewed attempt for energy policy coordination, has been the increasing energy security risks in Europe. The two natural gas crises in 2006 and 2009 were a wake-up call for the EU to elaborate mechanisms for gas supply disruption mitigation. One option, Mr. Urutchev has suggested, is the expansion of investment in regional energy market integration infrastructure. However, an obstacle to a common regional approach is that EU member states are often reluctant to give up their sovereignty in defining their national energy priorities. According to Mr. Urutchev, the successful implementation of the Energy Union will be most beneficial to the countries in Southeast Europe where energy security risks could undermine their political cohesion and economic development.

Dr. Edward Chow, Senior Fellow, Energy and National Security Program, Center for Strategic and International Studies, gave an overview of the global energy developments by discussing the prospects for the unconventional revolution in the US at the backdrop of lower oil prices. Dr. Chow dismissed the notion that lower oil prices will drive shale producers out of the market. As an evidence, he reminded that the US shale gas producers did not reduce their production despite falling gas prices across the US due to innovation gains in efficiency. Dr. Chow said the EU could benefit from the US experience of taking advantage of the economies of scale in the energy sector. He added that the EU should promote more competition on the energy market because competition drives efficiency and innovation. According to him, in order to expand the market competition, the EU should promote regional integration especially in areas such as Southeast Europe, where energy security risks have led to high energy import prices. Dr. Chow expressed his skepticism about the successful completion of the Turkish Stream, and stressed that only one line, solely dedicated to supplying the Turkish market, could be an economically viable option.

Mr. Martin Vladimirov, Analyst at the Center for the Study of Democracy, presented the main findings of the 2014 Energy Sector Governance and Energy (In)Security in Bulgaria report analyzing the key energy security risks and governance challenges for Bulgaria’s energy policy. His presentation went over the main energy security risks as addressed by the International Index for Energy Security Risks (IIESR) published by the US Institute for 21st Century Energy. The Index considers eight main factors influencing the energy security of the 75 largest energy consumers in the world. Bulgaria has been ranked 73rd with a score close to Serbia, Uzbekistan and Ukraine. Mr. Vladimirov explained that among the main challenges Bulgaria faces are energy expenditure volatility, energy intensity, as well as the country’s very low incomes and high, energy poverty rates. He specifically focused on the impact of bad governance on the country’s energy options, noting it increased the country’s energy security risks. The capture of Bulgaria’s energy policy and its implications for the energy security of the country and the region is most visible in the management of the Bulgarian section of the South Stream gas pipeline project. Lack of transparency and allegations for state capture risks became visible in the actions of the Hungarian and Bulgarian governments in amending their energy laws as to circumvent the EU’s legal objections against the South Stream project.

Dr. Jean-Arnold Vinois, Adviser on European Energy Policy, Notre Europe – Jacques Delors Institute, presented his views on the strong and weak sides of the Commission’s plan to launch an Energy Union. He maintained that the Energy Union’s most important benefit will be in facilitating close cooperation between the member-states. Even before the current project, the Baltic region has been seen as a successful example of market integration. In order to emulate the Baltic example, he added that the Energy Union should introduce a monitoring and evaluation mechanism of bilateral energy agreements, making sure that European energy law is being observed. Dr. Vinois pointed to the intergovernmental agreements (IGAs) struck between Gazprom and the member-states participating in the South Stream projects for containing provisions that directly violate the Third Energy Liberalization Package. He maintained that by ensuring transparency of the member-states’ deals with third parties, the Commission would enforce compliance with the internal energy market easier. Dr. Vinois also expressed hope that the Energy Union roadmap will create a European framework for the security of gas and electricity supply. The latter requires stronger leadership and authority from the European Commission. The driver behind the change in energy markets will be, on the one hand, the revolution in information technology, and, on the other, the active participation of the civil society in the policy debate. The latter would be crucial for building up cooperation mechanisms in the energy sector of the SEE region.

Mr. Reinis Āboltiņš, Senior Policy Researcher, Centre for Public Policy PROVIDUS, expressed his conviction that in the long term, the shale gas revolution in the US would also lead to a reduction of regional gas prices in Europe. Mr. Āboltiņš contended that energy price reductions could happen only if there is enough competition. He pointed to the Baltic region as a case study. The opening of the Latvian electricity market has led to a fall in power tariffs below the regulated prices maintained by political pressure. Similar degree of liberalization, according to Mr. Āboltiņš, has not been achieved in the natural gas market despite the structural prerequisites for more competition and diversification of sources. The commissioning of the Klaipeda floating LNG terminal (FLNG) has become a game changer for the whole region giving access to the three Baltic countries to alternative gas supply from Norway. However, Latvia has been reluctant to cooperate more closely on the regional gas market, which Mr. Āboltiņš implied, could be the product of external influence and the capture of policy-making circles.

Mr. Ruslan Stefanov, Coordinator, Southeast European Leadership for Development and Integrity , CSD who moderated the forum, noted that SEE countries face the double challenge of achieving bold transition in their energy sectors, while at the same time improving governance to be better able to uphold their national interests. Currently, all too often SEE countries are not in a position to define their national priorities, and their national policies fall prey to private interests. 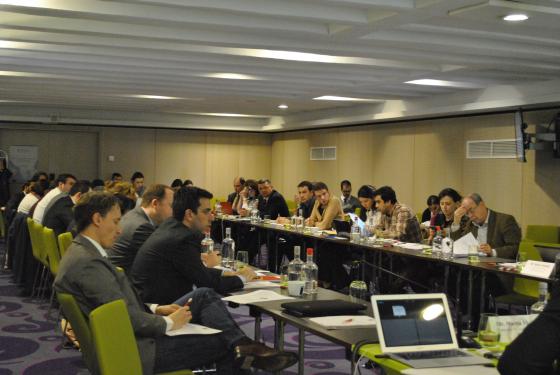 Dr. Todor Galev, Senior Researcher at the Center for the Study of Democracy

Mr. Martin Vladimirov, Analyst at the Center for the Study of Democracy