Mr. Martin Tsanov, Analyst at the Economic Program of the Center for the Study of Democracy, started the presentation of CSD’s latest report Energy Sector Governance and Energy (in) Security in Bulgaria by summarizing Bulgaria’s results in the International Index of Energy Security Risk (IIESR) developed by the Institute for 21st Century Energy at the U.S. Chamber of Commerce. According to the data, Bulgaria is facing the highest level of energy insecurity among all the 75 countries under review. Only Ukraine, Serbia and Uzbekistan face similar, but still lower, energy security risks. Romania, Bulgaria’s neighbor and fellow EU-member demonstrates much lower energy security risks. Bulgaria’s results suggest that despite the long-term trend towards decreasing energy security risk, from the 1980s onwards, three major risks remain: low energy efficiency, high and volatile expenditures on fossil fuel imports, and high dependence on oil and gas imports.

Mr. Ruslan Stefanov, Director of the Economic Program of the Center for the Study of Democracy, continued the presentation of the latest CSD report by focusing on the problems of bad governance of large infrastructure projects and of state-owned companies in the Bulgarian energy sector. He noted that after the start of the latest crisis in Ukraine, energy security has finally become a true priority for Europe’s economic policy, on par with competitiveness and sustainability. Bulgaria has not yet followed suit though. Mr. Stefanov provided specific examples for the lack of transparency in the governance of large energy projects such as South Stream, NPP Belene and the construction of a seventh unit in NPP Kozloduy. The key recommendations for improving the energy security of Bulgaria included in CSD’s report are: achieving political consensus on the long-term priorities of the national energy policy; more active participation in the European Energy Union initiative; introducing an annual review of Bulgaria’s energy security position; improving the independence of the energy regulator and better implementation of relevant EU regulations; introducing compulsory corporate governance standards for state-owned enterprises; developing indigenous energy resources and diversifying gas supply routes and sources; improving overall energy efficiency; and introducing mandatory ex ante cost-benefit analysis of large infrastructure projects in the energy sector.

Mr. Delyan Dobrev, Minister of Economy, Energy and Tourism (2012 - 2013), pointed out one additional energy security risk, apart from those already mentioned is the tendency for Bulgarian governments to pursue populist policies. He noted that one of the main risks for the energy security of Bulgaria is indeed energy poverty, as CSD’s report states. According to Mr. Dobrev, addressing this risk should not come at the expense of the financial health of the state-owned energy companies. The five-percent price reduction of electricity prices for end-users, introduced in 2013, failed to achieve the necessary social impact, but at the same time generated problems for the sustainability of public finances. Therefore, he suggested that what needs to be done is the gradual liberalisation of electricity prices, together with the simultaneous increase of the subsidies from the state budget for local energy poverty assistance - from BGN 100 million to BGN 300 million. This would allow the increase of the scope of the supported households from the current 250,000 to 500,000 in the future.

Mr. Dobrev also addressed the country's energy dependence on imports of gas as another major risk identified in CSD’s report. He suggested that the best way to reduce Bulgaria’s energy dependence is to promote the extraction of local energy resources. In this respect, he underscored that the exploration gas wells in the Black Sea, especially in the "Khan Asparuh" block, are particularly important. In terms of overcoming the low energy efficiency of the economy, Mr. Dobrev advised that the government‘s efforts towards the utilization of EU funds under Operational Programmes "Regional Development" and "Competitiveness" for this purpose should continue.

Mr. Georgi Kadiev, Member of the National Assembly (2013 - 2014) and Deputy Minister of Finance (2005 - 2007), noted that the poor governance of state-owned energy companies is due to corruption and political dependencies, which ultimately hamper their financial health. Mr. Kadiev emphasized that the biggest problem for the Bulgarian energy sector is the lack of transparency in the management of large energy infrastructure projects, such as the case for the construction of a seventh unit at NPP Kozloduy. Mr. Kadiev noted that the scale of such projects is so big that it would be very difficult to ensure the independence of the country's energy regulator, no matter which party is in power if corruption is involved.

Energy poverty is another critical issue for Bulgaria - about 900,000 pensioners live off the minimum pension, and could hardly afford even a small increase in electricity prices. The policy for energy assistance should be based on helping the most vulnerable social groups, rather than on price reductions for households at large.

Mr. Traicho Traikov, Minister of Economy, Energy and Tourism (2009 - 2012), stated that the findings, presented in CSD’s report demonstrated how the government, which he was part of, was right to maintain cautious but firm positions in its negotiations with Russia when discussing the implementation of energy projects and the overall management of the Bulgarian energy sector. In his speech, Mr. Traikov highlighted as a major problem for the country's energy security, the extremely low energy efficiency of Bulgarian households, leading to the paradox that a Bulgarian household uses three times more electricity per square meter of living area compared to a German household. This explains why the problems within the Bulgarian energy sector are not related to the building of another power plant or generation capacity but to the efficient distribution and usage of the energy which is currently produced.


Mr. Ivailo Kalfin, Minister of Foreign Affairs (2005-2009) and Member of the European Parliament (2009-2014), stated that Bulgaria could not rely solely on the EU to solve its problems. In addition, he noted that some European initiatives actually prevent the effective governance of the energy sector in Bulgaria. Apt examples are the EU mandatory requirements for the share of renewable energy sources in the energy mix of the country or the issuance of CO2 certificates. Mr. Kalfin underlined that in his opinion the risks stemming from the exploration and the production of unconventional gas are unjustified, regardless of the potential benefits for the Bulgarian economy. Regarding the problem with the competitiveness of the Bulgarian economy, he noted that the power tariffs in Bulgaria are lower for the household users and higher for the businesses as opposed to the price structure in most of the EU.

Mr. Konstantin Penchev, Ombudsman of the Republic of Bulgaria, discussed the topic of bad governance of the energy sector. He pointed to the widespread incompetence and corruption at all levels in the public administration. Mr. Penchev said that the low level of energy efficiency should be viewed from the perspective of citizen rights. He added that the Bulgarian energy policy is outdated and inefficient because of the bad governance of the sector, and the lack of transparency and accountability. He concluded that an increase in the power tariffs would not lead to an adequate solution to the financial problems of the state owned energy companies because the additional company revenues are likely to be used inefficiently.

Professor Ivan Ivanov from New Bulgarian University and ex-MP, emphasized that the CSD report is produced at a crucial moment for the Bulgarian energy sector, and is necessary to assist the improvement of the Bulgarian energy sector governance. Professor Ivanov claimed that the management of state-owned energy enterprises lies at the crossing-point between corporate and public interests leading to their financial troubles. He then pointed out that Bulgaria can increase its energy security by focusing on exploration and production of natural gas in the Black Sea. Meanwhile, he mentioned that the Bulgarian governments are still lagging behind in the implementation of EU regulations on providing secure supply of energy to their citizens.

Mr. Plamen Dimitrov, President of the Confederation of Independent Trade Unions of Bulgaria, urged the Parliament to adopt any decisions related to new energy infrastructure projects with consensus, or at the very least with a qualified majority. He regarded the Report’s recommendation of introducting corporate governance standards in state-owned energy companies in accordance with the guidelines of the Organization for Economic Cooperation and Development (OECD) as essential to the management reform of the state energy companies.

Mr. Georgi Krustev, Secretary of the National Security Council at the Council of Ministers (2012-2013), highlighted that the energy security risks are included as an important topic in the National Security Strategy, adopted with consensus in the National Assembly. Representatives of the civil society, including members of the Center for the Study of Democracy, played a very active role in its drafting. Mr. Krustev added that alternative analyses of national security issues supplied by NGOs are much needed to enhance the presence of energy security risks when identifying the main threats to Bulgarian security.

Mr. Rumen Petkov, Minister of Interior (2005-2008), observed that the problems in the Bulgarian energy sector should not always be sought in the country’s dependence on Russian state interests. According to him, the main priority should be the analysis and elimination of the backstage influence in the decision-making of the Bulgarian energy sector, well documented in CSD’s report. As an additional example of this influence, Mr. Petkov indicated the appointment of a person with criminal record on the Board of Directors of a state energy company despite the Attorney General’s knowledge and probably with the active assistance of the investigation services. It is also unacceptable, according to Mr. Petkov, to delay the process of extending the life of the fifth and sixth reactor of NPP "Kozloduy" as it poses not only an energy security risk, but also a risk for the country’s social security. 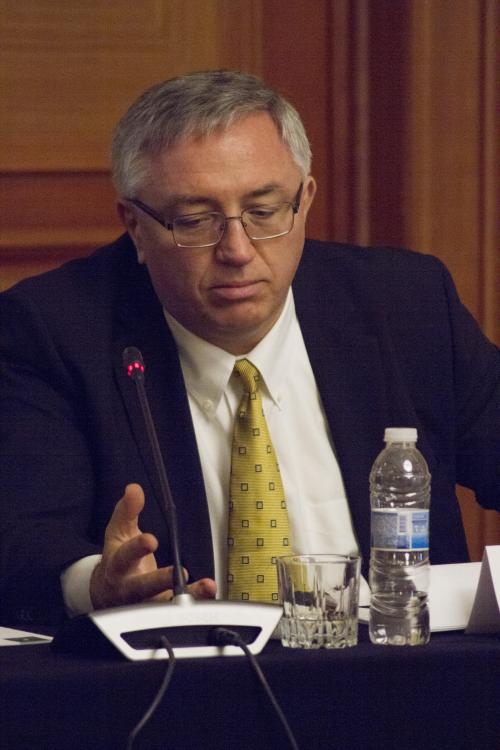 Mr. Georgi Krustev, Secretary of the National Security Council at the Council of Ministers (2012-2013)

Mr. Plamen Dimitrov, President of the Confederation of Independent Trade Unions of Bulgaria

Mr. Ruslan Stefanov, Director of the Economic Program of the Center for the Study of Democracy

Mr. Konstantin Penchev, Ombudsman of the Republic of Bulgaria