On 19 March 2015 the Macedonian Center for International Cooperation and the Center for the Study of Democracy organised the final policy forum within the project "Augmenting demand for anti-corruption and organised crime" (ADACTA) funded by EC within IPA program. Major findings of the survey and report on Corruption and Organized Crime Threat Monitoring Report were presented at the event as a basis to discuss plausible policy options to curb corruption and organized crime. The major goal of ADACTA was to transfer CSD's know-how in implementing Europol's model of OCTAs (organized crime threat assessments) and Corruption Monitoring System, applied to business and population.

Mr. Aleksander Krzalovski, Executive Director of MCMS launched the event highlighting the importance and timely appearance of the report in Macedonia, when society is highly concerned about high-level corruption, judicial inefficiency and corruption in education and health sectors.

Mr. Ruslan Stefanov introduced the audience to wider context of cooperation between the Center for the Study of Democracy and the Macedonian Center for International Cooperation with the South East Leadership Development Initiative (SELDI) and major findings of comparative research on corruption in Southeast Europe.

Ms. Emilija Tudzarovska-Gjorgjievska, the principle author of the report presented its the major findings and recommendations and Mr. Borjan Gjuzelov presented detailed estimates about probabilities of different corruption practices, estimates of corrupt transactions and different measures of enforcement characteristics. Mr. Todor Yalamov from the Center for Study of Democracy provided comments on the macroeconomic framework in Macedonia and implications of corporate governance mechanisms of state owned enterprises on corruption risks. Dr. Sladjana Taseva, President of the Board of Transparency International – Macedonia was also part of the panel of discussants providing her views on potential policy reforms that would tackle the corruption and organised crime. 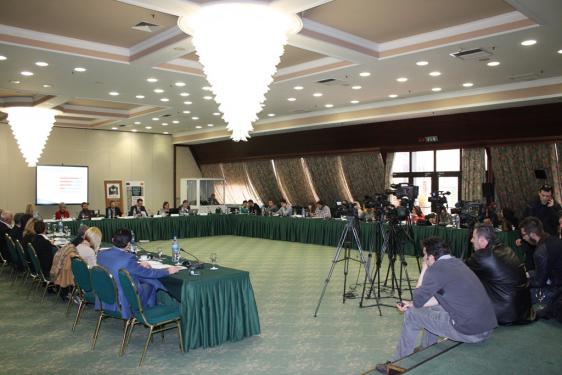