Opening Conference of the SELDI network

Opening Conference of the SELDI network

On 5 March 2013 the SELDI (SouthEast Europe Leadership for Development and Integrity) network held an Opening Conference for its civil society anti-corruption effort in the Western Balkans and Turkey in Zagreb, Croatia. The Center for the Study of Democracy is the coordinator of the SELDI network, which gathers 17 leading think-tanks and NGOs in the region with a mission to counter corruption. The participants at the conference discussed their experience in the area of combating corruption and outlined the necessary measures for greater involvement of the civil society, as a catalyst for improving anti-corruption policy implementation and impact.

Mr. Munir Podumljak, Executive Director of Partnership for Social Development, the host of the discussion, welcomed the participants at the conference. He stressed that corruption is high on the policy agenda in Croatia and the region as it affects countries’ economies, as well as the public image and chances of EU accession. He called for more active citizens’ involvement and better use of the support from the European Commission in the fight against corruption. According to him, the upcoming first annual EU Anti-Corruption Report 2013 is a revolutionary new tool and an important step in fighting corruption in the region.

Mr. Ruslan Stefanov, Director of the Economic Program at the Center for the Study of Democracy, Bulgaria and Coordinator of the SELDI initiative, welcomed the participants and presented CSD’s Corruption Monitoring System and the organization’s anti-corruption efforts since 1998. He underlined that corruption continues to be an issue in all countries in South-East Europe. The SELDI network will try to help the local, regional and EU policy-makers to better understand the phenomenon. It will also share experience across the countries involved.


Ms. Caroline Frieh-Chevalier, Attaché at the EU Delegation in the Republic of Croatia noted that corruption is harmful not only economically and financially, but also socially. It undermines the rule of law and affects the everyday lives of the citizens. The EU accession negotiations present Croatia with an opportunity for the country to increase its anti-corruption capacity, raise awareness and improve its legal framework. Ms. Frieh-Chevalier noted that the CSO cooperation in fighting corruption is irreplaceable.

According to Ms Violeta Stanicic, Head of the newly opened Information Office of the European Parliament in Croatia, the CSOs are the most important stakeholders in the fight against corruption. She underlined that in 2012 the Bulgarian CSOs have been extremely active in petitioning the EP. She reminded that 2013 is the year of the European citizens - they should know their rights and be active in protecting their rights, including when corruption is involved.

During the first panel of the event, Mr. Ruslan Stefanov, Center for the Study of Democracy, Bulgaria presented the EU Stockholm Programme and the EU Anti-Corruption Report. He noted that corruption has already been elevated to a main issue and common EU policy. It already sets indicators for measuring corruption, and thus provides an instument for preassure and initiating reforms. The SELDI initiatives can also make a difference in the fight against corruption, by using the triangulation approach - involvement of CSOs, policy-makers, and the EC.

Ms Ayse Ustunel Yircali, Executive Director of TESEV, Turkey presented the corruption and anti-corruption reforms in Turkey, as well as the role of CSOs in providing advocacy and policy advice. She stressed that more than half of the population consider corruption a major problem fort he country, according to various surveys. Since Turkey does not have an anti-corruption agency, the need for effective coordinatioon among the existing institutions with anti-corruption mandate increases. Moreover, the role of the CSOs is limited to consultations rather than participation, and their capacity and involvement should be strenghtened. According to Ms Yırcalı, the SELDI network will help in that respect.

Ms. Jovana Marović, Research Coordinator at the Institut Alternativa, Montenegro, highlighted the positive effect of the negotiations for EU accession on strengthening the anti-corruption legal framework in her home country. The Government of Montenegro also adopted risk assessment of corruption in several areas. It engaged the civil society in a public debate related to the development of a number of strategy documents. The work in this respect however is far from over. There is still a need for improving the capacity of the anti-corruption institutions, especially in terms of financial investigations. There is also insufficient legal base related to the public-private partnerships. And most importantly - in Montenegro there is still not enough commitment for countering corruption.

Ms. Alba Cela, Deputy Director of House of Europe, Albania presented the experience of CSOs in Albania in monitoring the anti-corruption measures. She expressed her hope that Albania will find new mechanisms for CSOs involvement. Only in recent years the civil society has stepped up its efforts and has started participating in the public policy discussions. The two biggest problems in Albania remain the impunity and the need for a better functioning justice system.

Ms. Daniela Mineva, Research Fellow at the Center for the Study of Democracy, Bulgaria presented the anti-corruption reforms in Bulgaria, from the pre-accession monitoring to the Cooperation and Verification Mechanism (CVM) to the EU Anti-Corruption Report. She noted that the CVM is a tool not only for pressure and monitoring, but also a tool for CSO involvement, provision of feedback and advocacy.

According to Ms. Marija Đorđević, Researcher at the Center for Liberal-Democratic Studies, although in recent years the administrative corruption decreased, the government neglects the problem of corruption at the political level. At the same time CSOs’ activities are related mostly to human rights rather than corruption.

Mr. Munir Podumljak, Executive Director of the Partnership for Social Development, Croatia stressed that CSOs are in high risk of becoming tools of the policy-makers’ agenda. According to him there is a need for integrity and accountability mechanisms for the CSOs themselves. The CSOs should provide real solutions and push for a change in the system. He underlined that the CSOs should also build their capacities, and work with the research and academic community to obtain knowledge.

Ms. Biljana Pejović, Secretary General of the Center for Democratic Transition, Montenegro presented the project Good Governance - Better Institutions, which monitored a number of government institutions and promoted their improved functionality in the country. The main findings of the project highlighted that the Montenegrin institutions are not sufficiently open and transparent. However they are trying to cooperate with CSOs and adopted some of the project’s recommendations.

The conference was concluded by presentations of two partner networks in South East Europe, which are part of the DG Enlargement’s efforts to increase civil society capacity in the region to participate more actively in public policy-making.

Mr. Garret Tankosic-Kelly, Principal of the South-East Europe Change Net think tank underlined that the EU energy policy is not transparent and corruption is one of the main reasons for the inefficient energy markets in the countries of the region. The high levels of corruption in the energy sector drive the investors away, which make the EC and the EBRD the only sources of funding.

According to Mr. Miodrag Milosavljevic, Program Coordinator, Transparency, Accountability and Public Integrity, Open Society Foundation, Serbia, public procurement is the most corruption prone area in Serbia, together with the financing of political parties. Additional issue in Serbia is the fact that the media is mainly financed by public sources, which leads to unreliable information presented to the public. The still numerous public enterprises are largely politicized, providing poor financial results and quality of services. The judiciary is also in need of reform, aiming at increased transparency. 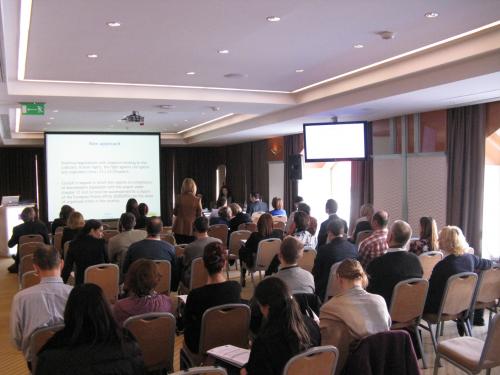 Ms. Daniela Mineva, Center for the Study of Democracy, Bulgaria

Mr. Ruslan Stefanov, Director of the Economic Program at the Center for the Study of Democracy, Bulgaria