The Monitoring Anticorruption Policy Implementation (MACPI) supplies evaluators and policy makers with a precision instrument for assessing the design and impact of anticorruption policies at the point of their actual enforcement – the individual public organisation. MACPI is capable of identifying the specific zones of corruption vulnerability in public organisations and assessing the policies that target these vulnerabilities.

Throughout its stages of development the tool was consulted with leading international experts with various background. As part of these consultations, the Center for the Study of Democracy organized an expert workshop on June 5, 2015. During the event international experts shared their views on the future development of the tool and its applicability in different sectors.

Dr. Alexander Stoyanov, Director of Research at CSD, explained that the tool is designed for public institutions with a view to finding gaps in anticorruption policy implementation. MACPI can be used by an organisation to assess changes in its anticorruption policy setup – new policies, potential vulnerabilities, etc. It is flexible and could be used with minimum adaptation in various types of public organisations. Dr. Stoyanov explained the main theoretical assumptions when developing the tool, including the hypothesis that corrupt behaviour is located at the level of public organisations. He clarified the form and content of corruption exchanges of resources, as well as the concepts of corruption interest and corruption vulnerability.

Mr. Alexander Gerganov, Researcher at CSD, underlined a number of additional benefits of the tool, including comparisons of corruption risk among institutions and sectors, existing anticorruption policies’ scores and the dynamics within a given institution over time. He made a brief review of the results of the pilot implementation of the tool in Bulgarian institutions.

Prof. Umberto Triulzi from Sapienza University of Rome made a distinction between corruption policies that are internal and external to a government organization. He also stressed on the need of establishing the volume of transactions that take place at a given institution, as higher volumes suggest a higher corruption risk. The researchers who worked on the development of the tool agreed that this can be an additional feature to an upgraded MACPI.

The Monitoring Anticorruption Policy Implementation (MACPI) tool can be very useful, if it is applied in institutions regulating the energy sector. This is the opinion of Mr. Reinis Aboltins, a researcher at the Centre for Public Policy – Providus, Latvia. He added that this would require an adaptation of the tool to the specificities of the energy market.

Mr. Jean-Arnold Vinois from Notre-Europe Jacques Delors Institute was interested in the reasons behind the high levels of corruption registered in Bulgaria in 2014 in comparison to the relatively positive trends during the previous years. The spike in corruption, it was explained, could be attributed to the unstable political situation in Bulgaria that period.

Mr. Aare Kasemets from the Estonian Academy of Security Sciences highlighted that MACPI has adopted a very interesting approach that he believed would prove very valuable in the future. The practical aspects that have come up during the implementation phase, namely the issue of “institutional patriotism”, raise a lot of question marks, but these issues could be resolved during the next stage of development of the tool.

Mr. Erik Csernovitz, Deputy Secretary General of the Central European Initiative, noted that MACPI team should look for opportunities for application of the tool in institutions in EU candidate countries. 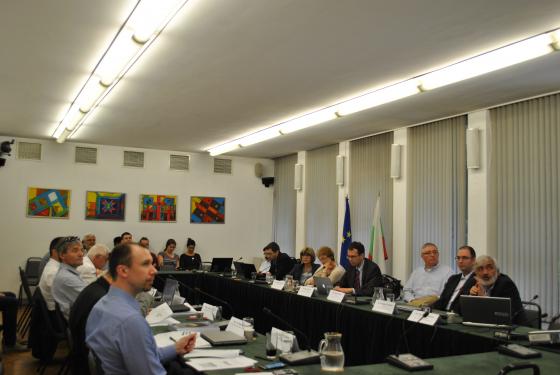 From left to right: Mr. Ruslan Stefanov, Director of CSD Economic Program at and Dr. Ognian Shentov, Chairman, Center of the Study of Democracy